Crisis Force for the Famicom: Somebody got a Bargain 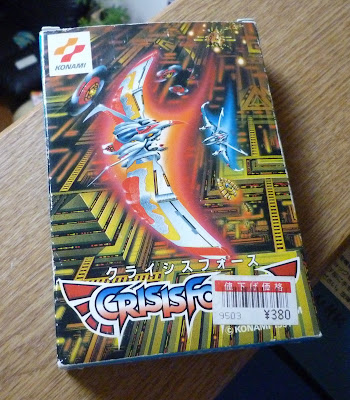 As I have alluded to in previous posts, I have been doing a lot of shopping on Yahoo Auctions recently. I`ve been buying mainly stuff in larger lots since the per-cart cost is pretty cheap when you do that. The only downside being that you end up with a lot of mahjong games.

Usually the lots I bid on will have a crown jewel or two that is what I am mainly after. One lot I got recently had the above CIB copy of Crisis Force as its piece de resistance.

Crisis Force is a shoot-em up developed by Konami. It is a massively popular game among Famicom collectors for three reasons. First, it was only released in Japan. Second, it is awesome. Third, since it came out towards the end of the Famicom`s lifetime they didn`t sell too many, making it, if not super-rare, at least hard to come by.

I already had a loose copy, but I thought a CIB one for a good price would make a nice addition to my collection so I got it. I did get a pretty good deal on it, but when I received it I discovered that someone else at one point had gotten an even better deal on it: 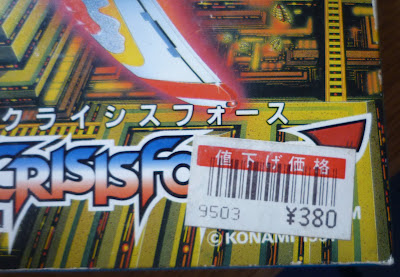 Its a little annoying when good games have price tags right on their precious cardboard boxes like that. What makes this most interesting though is the price, 380 yen is only about 5$.

Unfortunately the price tag doesn`t have the store`s name on it as I would love to go there for some browsing if this is what they price things at. In all likelihood though this price tag is probably 15 years old and predates the development of a collector market for this game. Mandarake in town for example has a CIB copy going for about 80$, so it is usually an expensive game in Japan too (though not quite as expensive as Ebay).
Posted by Sean at 9:55 AM