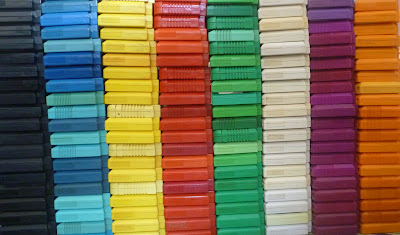 I`ve never really organized them by color like this before but I thought I`d give it a try to see how they look. I`m rather pleased with the results. The effect reminds me of going into Uniqlo and seeing all their generic T-shirts in primary colors stacked up evenly on the shelves. Very pleasing to the eye. 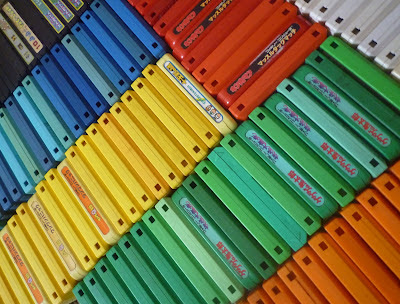 My only regret is that there aren`t enough pink games to make a stack of them too. The pink carts are really the ones that stand out the best, at least the ones that are really vibrant pink like Super Mario Bros. USA or Banana.

Anyway, as I`ve said before, it is the color of the carts (among other things) that really separates the Famicom from almost every other console out there, except the colorfully-carted Epoch Super Cassette Vision (which is unfortunately massively hard to collect due to its scarcity).

A pile of Super Famicom or Nintendo 64 carts just can`t compete with that!
Posted by Sean at 9:21 AM