Spartan X 2 and Why I Hate the Other Omocha Souko 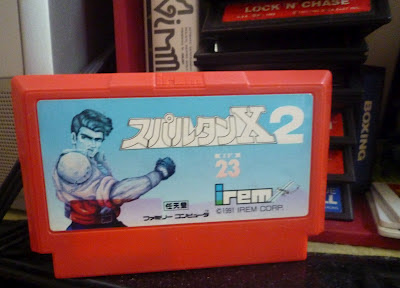 I made the 45 minute trek out to the other Omocha Souko this morning. As I`ve mentioned in previous posts the location near my house will be closing at the end of the month. They are having a huge sale and I was kind of curious if the other one way out in the suburbs might also have been putting their Famicom stuff on sale.

Unfortunately they weren`t. I didn`t want to walk away empty handed after such a long bike ride though so I had a look at their glass case Famicom stuff - the really good stuff.

I noticed that they had a copy of Spartan X 2 for 1500 yen in there. Spartan X 2 is a somewhat rare game that sells for about twice that at Mandarake and it is one I needed for my collection. I agonized over the decision for a while and then decided to buy it. I told the guy behind the counter I wanted something from the glass case, pointed at the cart and he rang it up for me. I love doing that. Makes me feel like a real big shot to be buying stuff out of the glass case rather than off the racks or (even worse) out of the junk bin.

Now I should mention that due to the game`s relative rarity I`m not all that familiar with what it looks like. When I got it home though I realized I had made a horrible mistake.

When I took the plastic wrapping off of it I noticed this: 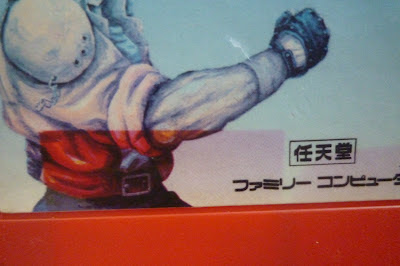 Pretty strong distinction in the coloring there, isn`t it?

To explain: that rectangular part that is vibrantly colored was covered by the price tag when I bought it. The extraordinarily faded part was not. The bastards, for whatever reason, kept an incredibly sun faded copy of Spartan X 2 in their glass case.

Because I wasn`t too familiar with what the game was supposed to look like and because I couldn`t see the contrast between the sun faded part and the part under the price tag, I didn`t realize this in time.

Normally I`m not all that picky about cart condition, but this time I kind of am. The thrill of my glass case purchase has been ruined! Plus egregious sun-fading like this really ruins the appeal of the cart, especially when you can see the contrast between the two bits like that.

The ironic thing is that, looking at my previous post on that very store last year I realize that at that time they also had a copy of Spartan X 2 for 1500 yen which I mentioned being tempted to buy in that post. I even took a picture of the same glass case they got it out of and you can see the copy of Spartan X 2 in there. Only the copy they had back then wasn`t sun faded! Curses, if only I had bought it back then!