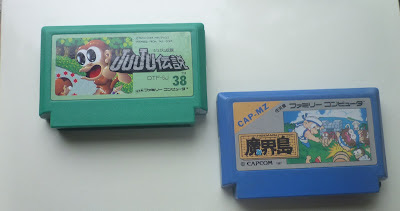 One of the great things about shops that you frequently visit is the little memories they leave you.

My favorite Omocha Souko memory is one from very early in my Famicom days, very shortly after I got my first Famicom.

This was way before I started collecting, I probably had about 15 or 20 Famicom carts at the time and the other 1035 of them were for the most part a complete mystery to me. My wife and I got into the habit of dropping by Omocha Souko once a week or so and buying a Famicom game that looked like it might be fun as a means of cheap entertainment for an evening. At that time Omocha Souko was charging a flat rate of 300 yen for most of its games (save the ones in the glass case), which was about the same price that it cost to rent a DVD. So for a couple of hours entertainment, a Famicom game was competetively priced. And, unlike rental DVDs, you could keep the game at the end of the day.

Anyway, I remember one evening back then the two of us hitting Omocha Souko. They had thousands of Famicom games on the racks. When I see their Famicom game racks now it doesn`t have the same effect that it used to. I know all the games they have because I have them too. There is no mystery. Back then though I didn`t know any of the games so it was massively interesting to explore the racks, trying to figure out which game might be good based solely on the game`s title and cover art.

That evening after spending a while searching the racks, we came up with two possible candidates. JuJu Densetsu and Makai Shima. My wife advocated for JuJu Densetsu. The monkey looked pretty cool and the name `JuJu` suggested fun, as did the cart`s green color.

I took up Makai Shima`s cause. The blue cart looked great. And in the cover art you could see the sailor knocking down little pirates with barrels, suggesting that it was not some crappy RPG but an action game of some sort. Throwing barrels at Pirates, I added, was an activity that really appealed to me.

We agonized for a while over the decision, but in the end JuJu Densetsu won out. That monkey is hard to resist. We took it home and were pleasantly surprised to discover that it was a pretty decent platformer. We definitely got our 300 yen`s worth that first day and it became a regular part of the lineup.

We ended up getting Makai Shima on a later trip. Its not bad either, but I have to concede that JuJu Dentsetsu is way better. A lot of other games fell into our hands on those `buy a game for the evening` trips - Binary Land, Nuts and Milk, Banana, Lode Runner and Yume Penguin Monogatari being some of the highlights. Eventually though we got to a point where we had a ton of games and the Omocha Souko racks stopped turning up games we were interested in as we had picked over all the best. Our little tradition came to an end. It was, however, fun while it lasted.
Posted by Sean at 10:04 AM