The Awkward Relationship Between the Famicom and NES Collecting Worlds 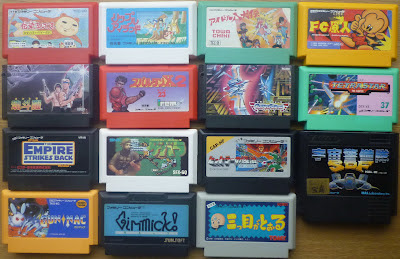 I was doing a Famicom related Google image search the other day when I spotted the above picture at the top of the results.  I recognized it from this post I did 6 years ago about some of the better Famicom games I had at the time.  But the image wasn't directly from my blog, rather it was contained in this video on YouTube:

The video is by "Pat the NES Punk" who I guess borrowed my picture for some reason.*  The video itself addresses the question of whether demand for Famicom and Super Famicom games is increasing.  They emphatically answer "no" to this question.  Originally I was planning to do a point-by-point response to their arguments, which I should note were made in 2015 and the explosion in Famicom prices since then seems to have proven them wrong.

But then I realized that this was unnecessary since there is really just one common and, for reasons I'll get into further below, faulty underlying assumption behind their arguments which is worth addressing.  That is that Famicom games might be, in economic terms, little more than a substitute good for NES games.  A substitute good is one which is so similar to another good that consumers view them as interchangeable.  Thus if the price of one of those goods rises, consumers will start buying the substitute good instead.  This will cause the price of the other good to rise as well.

So their assumption is that assessing demand for Famicom games can be approached by determining whether or not NES collectors, frustrated with rising prices of NES games, are turning to them as a substitute good.  They conclude that this isn't happening in part based on factually incorrect statements (like not being able to play half the games due to the language barrier, which overstates that quite a bit) or logically dubious propositions (like American collectors preferring the familiarity of NES games, which may be true but doesn't preclude them from also liking Famicom games).

But what I really want to address is the whole NES-centric view that Famicom collecting is little more than an appendage to NES collecting.  I don't think this is accurate.

Of course I have my own personal biases as a Famicom collector who has little interest in the NES.  Seeing discussions like that inspires an almost tribal instinct in me to paint my face blue, don a kilt and yell "Freedom" as I swing a pixelated battleax at the NES hordes that have dominated and oppressed my people for so long.

More objectively though I think its just plain incorrect.  So I thought I would review some of the reasons why analyzing the Famicom market through the lense of the NES market like this makes no sense (at least to the extent that you are trying to understand the Famicom market).  These observations are based in part on my time as a collector but also as a seller of Famicom games on Famicom World, Nintendo Age and RF Generation for several years (mostly from 2011-2016)

1. The Famicom, not the NES, is the most international console

This is kind of a bold statement but I think it is true.  Of course back in the 1980s the NES was the better known of the two internationally (outside of Asia and a few other markets anyway) and the version released in Europe and other regions copied the look of the NES rather than the Famicom (both the console and the carts). But this, I think, makes the Famicom more appealing to collectors internationally today than the NES is.

If you are a European collector looking for something new, the North American NES is pretty blah since it looks exactly the same as your NES, although it might have some releases which didn't come out in Europe you might want to pick up.  And vice versa.

The Famicom though?  The console and carts look completely different and are aesthetically way more pleasing than the boring grey NES ones.  The variety of games is also significantly different and there are loads of great ones that weren't offered on the NES in either Europe or North America. It also has a much more important place in gaming history as the mother of all Nintendo consoles, a title which the NES cannot lay claim to.

I think these factors combine to make the Famicom the go-to "foreign" console for collectors in most countries rather than the NES. This of course means that the potential market for Famicom games is quite a bit larger too (emphasis on "potential" since the domestic market for NES games is still way bigger).

One of the most distinctive features of the Famicom and NES collectors markets is that despite being the same hardware, there is almost no overlap between the two in terms of what collectors consider the holy grails.  They each have quite different ones.

There is a list of the most valuable NES games on Racketboy (from 2017) here.  While a lot of those games were also released on the Famicom, the vast majority of them (with some exceptions like Little Sansom, Snow Bros and the Jetsons) aren't among the most expensive and none of them really crack into pure "holy grail" territory.

Interestingly I just realized that there isn't a similar comprehensive list of the Famicom's holy grails out there(the racketboy list above has an addendum which mentions five Famicom rarities but this is just the tip of the iceberg) but I can say that most of the games that would be on it (hey, this gives me an idea for a future post) are not NES icons.  This is because so many of the rarest Famicom games have unique little histories which resulted in very limited releases.  Just off the top of my head some of those are:

This is by no means an exclusive list, I'm pretty sure the Famicom has way more holy grails than the NES does.

The important thing though is that this difference really demonstrates how Famicom collecting is NOT driven by NES collectors seeking cheaper versions of NES games since the most expensive Famicom games have no NES equivalent.  This also applies to the most expensive regular issue games like Gimmick! and Adventure Island 4 which weren't released on the North American NES.

Its perhaps also worth noting that there are 127 million consumers in Japan who don't really give a shit what foreigners collect, except for the fact that they are making everything way more expensive, which is annoying.  The dynamics of Famicom collecting in Japan among Japanese collectors is significantly different than it is outside.  Japanese collectors have much different tastes in games, and the fact that a game wasn't released outside of Japan, a major driver of a Famicom game's value on the international market, is of zero interest to them.  While the run up in prices on Famicom games I think can mainly be explained by foreign demand, Japanese collectors have (some happily, some reluctantly) jumped on the bandwagon, and stuff like TV shows highlighting the collector value of games are now common place.

If anything though, this chronology puts the horse before the cart (HA!  Get the pun?).  I think shops in Akihabara and Den Den Town were selling Famicom games as collectors items long before NES collecting became mainstream in the US.  Mandarake and Super Potato have been around a while now.

4. Famicom Collectors Come in all shapes and sizes

Returning to the international collectors market here,  it seems to me that people have a pretty wide range of reasons for buying Famicom games and very few do so to avoid high NES prices (even fewer now that Famicom prices are getting so high).

I think most  Famicom and NES collectors fall somewhere on this spectrum, but the problem with
analyzing the market for Famicom games through the lense of the NES market is that you arbitrarily eliminate consideration of collector types 1, 2 and 3 from the equation.  The relative numbers of each of these groups is an open question which  I don't know the answer to, but at the very least there do appear to be a non-trivial number of people in those categories out there who are spending money on games, so they shouldn't be ignored.

So these are just a few of my thoughts on the folly of judging the market for Famicom games primarily based on an analysis of the idiosyncrasies of NES collectors, which is what Pat the NES Punk does in that video.  I'm not trying to criticize those guys particularly, I watched a few of their videos and found them entertaining, more I'm just trying to add a more Famicom-centred perspective since it seems to be lacking in a debate that is fundamentally about Famicom games (an odd omission).


*On that topic, what is the accepted protocol in the video game blogging community with respect to borrowing pics?  Just borrow away?  Or borrow with acknowledgment?  Or only borrow when you’ve obtained permission?


I have a lot of photos on this blog and I’m generally OK with people using them, though I think common courtesy demands some form of acknowledgment (which, ahem, was not forthcoming).  That, at least, is what I do whenever I use a photo that I’ve gotten from someone else.  I think this is especially the case when a “big” social media entity (they have more than 230,000 followers)  borrows from a “small” one (I have 113).    I'm not sure I'm in the majority here though, what does everyone think?