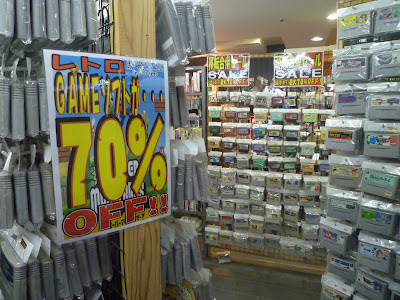 In this post I thought I`d toss out a few ideas on why my beloved Omocha Souko store has failed so spectacularly after less than 4 years in business. I`ve come up with a half-dozen possible contributing causes, which I present below in no particular order.

As I illustrated in my previous post, Omocha Souko was a massive complex with a lot of cool design features that made it a fun place to walk around. Unfortunately stuff like that costs a lot of money, which means that Maxim City was probably (just speculating here, I have never seen their books) carrying a lot of debt that they incurred with the up-front costs of building the place.

Its a sad fact that people who just build bland warehouses to sell stuff in (like Book-Off) have a competetive advantage since those places are cheaper to build. If you are going to build a place with all the bells and whistles that Omocha Souko had, you have to attract more customers to make that initial investment pay off. While Omocha Souko was certainly never deserted, in my times there I rarely saw it packed with people. Usually you wouldn`t have to wait in line at all at the cashier, or at the most there would be one or two people ahead of you. That was great for me, but was also an obvious sign that they weren`t getting a huge amount of foot traffic.

They chose an odd location for this store. The problem was that they opened up only 2 blocks away from 007, a store that sells the exact same variety of products. In fact you can actually see Omocha Souko if you stand across the street from 007, its only a few minutes walk away.

In general Omocha Souko was a way better store than 007. But that is just my subjective opinion as someone who was really only interested in their Famicom games. 007`s Famicom games are more expensive and they rarely get new stuff in so I only drop by once a month or so even though, like Omocha Souko, it is right on my daily commute.

In terms of other stuff though I am guessing that 007 was able to hold its own in competition with Omocha Souko. In particular they seem to do a lot better in selling those card games that kids like as I always see crowds of elementary and junior high school students crowding around 007 playing those games while Omocha Souko rarely does.

So for most of their products I think the two stores were really just splitting the market between them and 007 for whatever reason was the one that ended up winning.

Omocha Souko opened in October of 2008, which was exactly the same time that the global economy was starting to go down the tube. Japan was particularly hard hit at that time and in the first year after the store`s opening the Japanese economy contracted in every quarter. Consumer spending in general plummetted during 2009.

Immediately prior to that the Japanese economy had been doing relatively well, having sustained about 7 years of continuous growth that made it look like the troubles of the 90s had been solved.

In other words, by unlucky coincidence they chose the exact worst time to open their store. They made the plans for it during a time of growth but implemented them in a time of contraction.

At the time they opened the complex included a few side-businesses that failed to take off and closed down. On the second floor they opened an okonomiyaki restaurant. My wife and I had lunch there once, it wasn`t bad. Like the rest of the complex it was decorated in a cute Showa-retro theme.

That closed down after about a year. Unfortunately I never took any photos of the place while it was open. For a while that section was closed off, but they later turned it into a pornography section:

The other failed business was a magic show. They set up a magician`s theatre in the first floor retro town area: 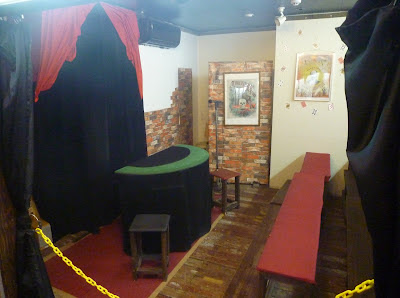 This also failed to take off and I don`t think they`ve had a magic show there in 2 or 3 years. Despite that the theatre is still there and you can see everything in there collecting dust as you walk by. Its a rather melancholy reminder of how the big plans they had when they opened the store never really worked out.

This is just a guess but for a lot of stuff that Omocha Souko sells, including video games of course, Yahoo Auctions and other online sources are probably biting into the bottom lines of physical stores. I don`t know if this is as advanced as it is in North America, but probably the same trend is hurting this type of store too.

This is pretty much summed up in my first post in this series. With their retro game stuff they have sold so much stuff to me at such ridiculously low prices that you have to wonder if they had priced them higher maybe they would have made a bit more money.

The counter-argument is that if they had priced them higher, they`d probably have a huge pile of over-priced games taking up space on their shelves collecting dust and not producing any income at all. So I`m not really sure if that actually hurt them too much or not.

I`m not sure which of these played the biggest role in the store`s demise, probably they all played a part. In general though the store was probably built in the wrong time, in the wrong place and with the wrong business plan. It was a great store for someone like me, but that just isn`t enough to spell success.