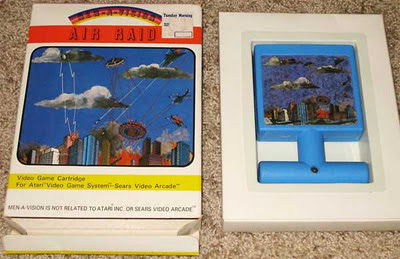 A couple of months ago I was browsing Ebay for Atari 2600 stuff. I was interested in buying a console (very hard to find in Japan) as it is one of those iconic classics that I have wanted to add to my collection for a long time.

Unfortunately it is also a really really heavy classic console, so the cost of shipping one across the Pacific made me drop the idea. My time spent searching wasn`t entirely wasted, however, as coincidentally at that time someone had put up a copy of Air Raid for auction.

The Ebay listing was quite interesting. The seller (see here) noted:

Based on research I have conducted, this is only the 14th known copy of Air Raid by Menavision. I bought this game new in Texas in 83 or 84. It has been boxed up and following me around the country for decades...

The game, which was cart only, ended up selling for $3,575. It seems to have been completely legit, including his assertion that there are only 14 known copies of the game in existence.

Air Raid is one of the holy grails of retro video game collecting. Along with Stadium Events for the NES and a couple of others it is probably the most valuable retro game out there. If you want to have a complete set of Atari 2600 games, and a lot of people do, you need this game. This has made the lone known CIB copy of it the most valuable Atari game out there, selling for $31,600 in 2010. The only game that has sold for more as far as I can tell was a sealed copy of NES Stadium Events which sold for $41,300.

Now I really hate it when people talk about video games primarily as an investment. I don`t view them as such myself. They are fun games to be played and enjoyed for what they are.

At the same time though, as a collector, this sort of thing does intrigue me. While I hate the way money can infect a hobby and strip it of its fun, I also like the fact that these holy grails are floating around out there with people chasing after them and putting a high price on them. Given their prominence, historical importance and rarity some of these things actually do deserve to be worth something.

Unfortunately (or fortunately perhaps) the Famicom doesn`t have any holy grails. Well, it has some of course but they don`t really count in the same way that Air Raid does. There are gold versions of some games (Punchout, Hot Scramble, Rockman 4) and special giveaways for contests (Recca Summer Carnival 92), but I don`t count those as part of the regular set. Those are more the type of contrived rarity that is way less interesting than actual rarity caused by things like, as in Air Raid`s case, the game being massively unpopular.

Anyway, what interests me most about that Air Raid game, and particularly the complete copy that sold for $31, 600, isn`t how much it sold for but how little.

$31,600 might sound like a lot, but when you compare it with what the holy grails in other collecting hobbies it is almost like they were giving it away. Supply and demand being the main determinants of the value of a collectible I thought it might be interesting here to look at the prices of those other holy grails and their relative scarcity (supply) and popular appeal (demand). Lets start with comics. 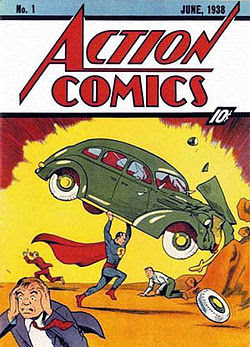 There are estimated to be about 100 of these in existence, so it is quite rare though there are fewer copies of Air Raid. It is also an icon, given Superman`s place in 20th century pop culture. This gives it a big edge over Air Raid, which is basically a game nobody has ever heard of whose only fame is attributable to the console it was made for. Still though, the difference in price is startling. The best known copy of this sold a couple of months ago for $2.16 million. 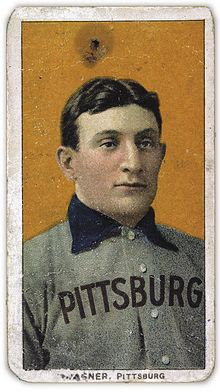 This is the 1909 T-206 Honus Wagner. The T-206 is a very popular set of Tobacco cards among collectors, but this card is extremely rare due to the fact that Wagner (for reasons that are disputed) refused permission for them to use his likeness. This forced the American Tobacco Company to remove the card from distribution, but somewhere between 60 and 200 copies of it made it into the market and are now far and away the most valuable sports card in existence.

In comparison to Air Raid, there are more copies of this card out there so Air Raid wins in terms of supply. In terms of demand Honus Wagner was one of the best players of his generation, though that was about 100 years ago and were it not for this card most people who aren`t baseball fans would have no idea who he was. So it isn`t anywhere near as significant in cultural terms as Action Comics 1. At any rate, the best copy of this card out there sold for $2.8 million in 2007, which is about 90 times more than what the most expensive copy of Air Raid fetched. 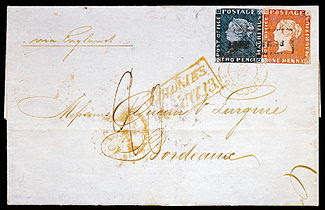 The above is an envelope with two stamps from Mauritius which were produced in 1847. These stamps are extremely rare as only 500 of each were ever produced. This envelope (called the Bordeaux cover) is a one of a kind item of particular note because it has both of them on it. It sold for $4 million in 1993 the last time it changed hands and is probably the most valuable stamp related item in the world.

As a one of a kind item it is basically equal in scarcity to the complete in box copy of Air Raid. In terms of its appeal - stamps from Mauritius? An obscure British colony in the middle of the Indian Ocean? Outside of stamp collectors I think it is safe to say that this is of no interest to anyone so I give Air Raid a win on that count.

I could probably draw on examples from other collector`s hobbies but I think you get the drift. Holy grails in other hobbies, even ones that are not as rare as Air Raid, all sell for millions of dollars. The video game collector`s holy grail only sells for $31, 600. If you think about it, this doesn`t really make much sense. In terms of popular appeal, video games easily rank up there with comic books and probably beat baseball cards (only popular to baseball fans) and stamps (almost nobody under 40 collects those). The only reason I can think for the relatively low value of Air Raid is that the video game collecting market is much newer than the market for those other things and most people who would buy them are probably in their 20s or 30s. That is an age bracket which doesn`t have anywhere near as much spending power as the baby boomers who drove up the prices of comics and baseball cards in the 1980s. Twenty years from now though when the first generation who played Atari as kids are in their 50s and 60s and are the CEOs of major companies with craploads of disposable income this thing will probably be selling for obscene amounts too.

Related Posts:
- Opinion: On the Economics of Retro Game Collecting
Posted by Sean at 10:41 AM