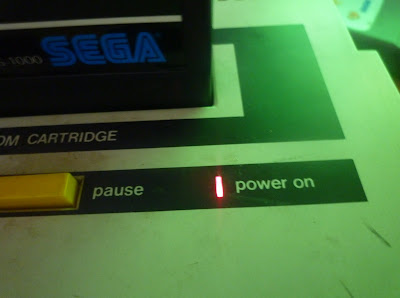 Just wanted to post a quick update about my recently acquired Sega SG-1000 II. I found an RF switch for it and decided to take a chance on using a PC Engine AC adaptor with it.

I plugged my one and only game - Pacar - into it and after a few minutes of messing around had things functioning quite smoothly.

It is actually quite a good game. It looked like a racing game on the cover, but it is actually like Pac Man. You ride around a maze-like set of roads picking up dots and trying to avoid a couple of other cars which are also on the road. Hit one of them and you are toast. But if you grab a power up you can turn the tables and only the other cars crash when you collide.

Basically PacMan only with cars.

Anyway, it now has pride of place next to my kitchen TV: 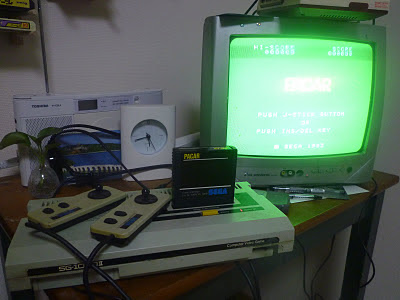 I can`t wait until I get some more games for it!