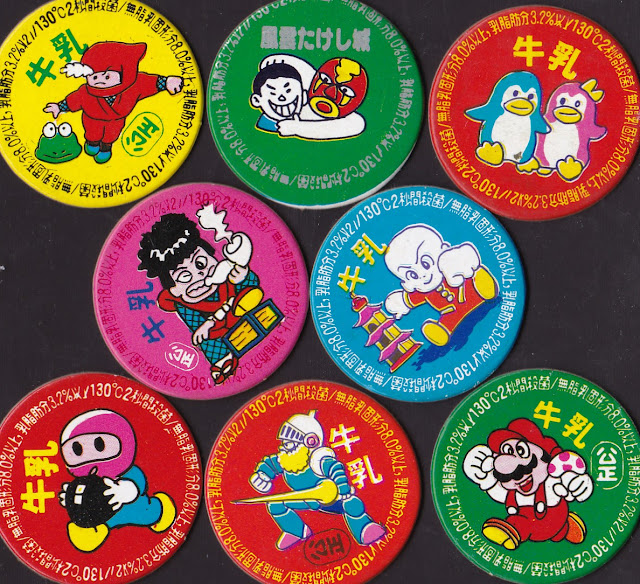 One of the cooler and rarer Famicom things out there to collect are these guys: Famicom milk caps.

These things are awesome, yet very little seems to be known about them.  They were distributed with bottles of milk for Japanese kids back in the 1980s, you could pry them out of the top of the bottles like this: 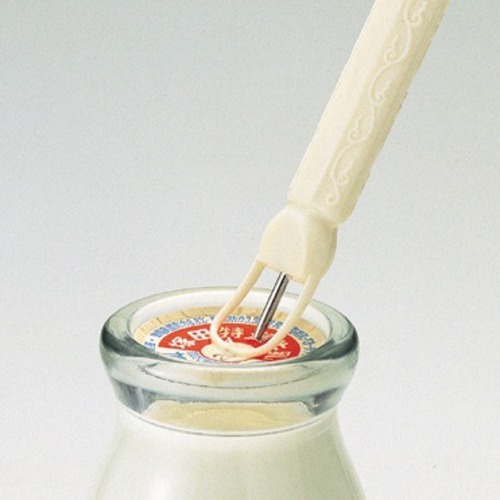 They feature characters from well known Famicom games from the mid-1980s.  The artwork on them is quite striking because it is unique and doesn't just mimic the art on the cart labels or anything.
I don't know which milk company released these, which is the mystery I'm interested in solving.  There are a LOT of milk companies in Japan.  The little text that wraps around the edge of them doesn't provide any clues, it is just nutritional information about the milk.  The big kanji characters on most of them just say "Milk", except for the Takeshi's Castle one which says "Takeshi's Castle".
In case you need help matching the milk caps in the above photo to the Famicom games they are:
Ninja JaJa Maru Kun
Takeshi's Castle
Binary Land
Ganbare Goemon
Super Chinese
Bomberman
Makai Mura
Super Mario Bros.
This is far from a complete list, I only have a small fraction of the ones out there.  Which brings me to the second part of the mystery: what does a complete set of these look like?  I've seen the odd group of these pop up here and there, but I don't know of anyone who has a complete set of them nor do I know of any checklist that exists.  These things are quite rare - most of them were thrown out decades ago so only a few seem to have survived which makes them difficult to find.
There are a few up for sale on Yahoo Auctions right now and I can see some for Wild Gunman, Dig Dug and Pac Land which I don't have, as well as some different versions of Super Mario Bros, Makai Mura and Ganbare Goemon which have different pictures from mine.
If I stick with this long enough, maybe someday I'll be able to track them all down and be the first to create a full checklist of them!
For now though I'm happy to introduce them to the English language Famicom collecting world, another thing to chase like the menko I discussed in my previous post.   Japanese collectors are already aware of these and prices seem to have gone up quite a bit (along with everything Famicom related) recently, they are listed for about 10$ each on Yahoo Auctions right now.