Agh, I'm so excited about these!  Amada Famicom Puzzles!

I decided to pull the trigger on a big ticket item that was up for sale on Yahoo Auctions a few days ago.  This beautiful box arrived in the mail from the seller yesterday: 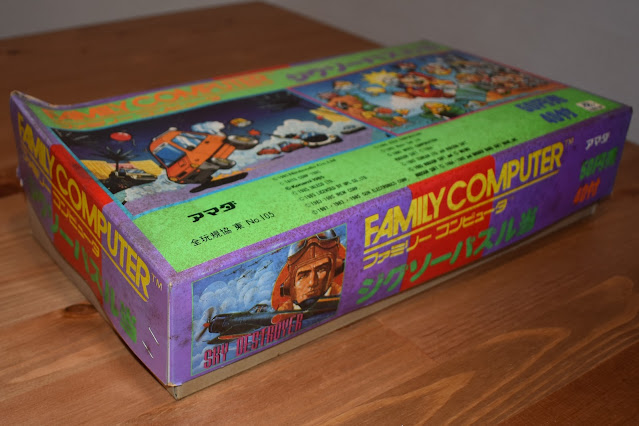 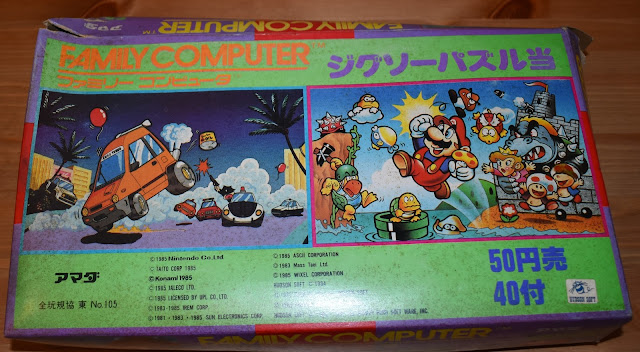 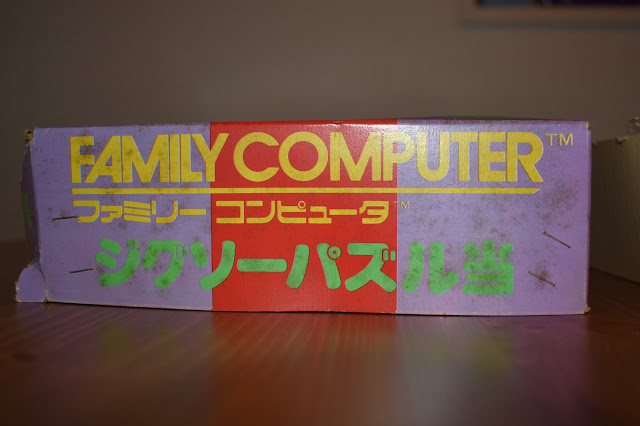 Open it up and you find three more boxes, with jigsaw puzzles for Super Mario Bros, Pooyan and City Connection: 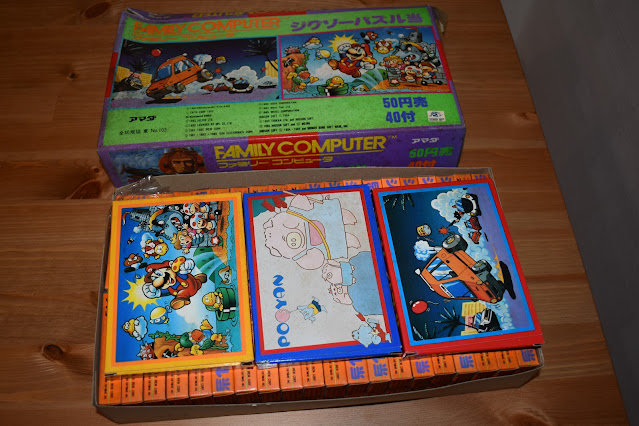 Picking them up, they are so beautiful: 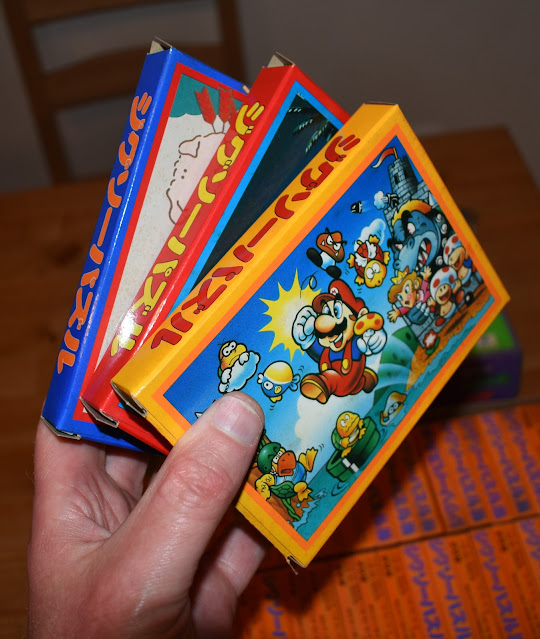 And under them you find 40 more boxes, each containing a random puzzle of a Famicom game inside: 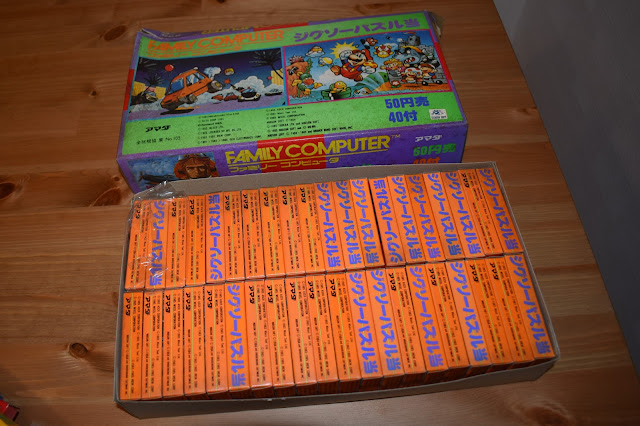 The outside of each box looks the same.  It has Super Mario Bros artwork on the front, City Connection on the back: 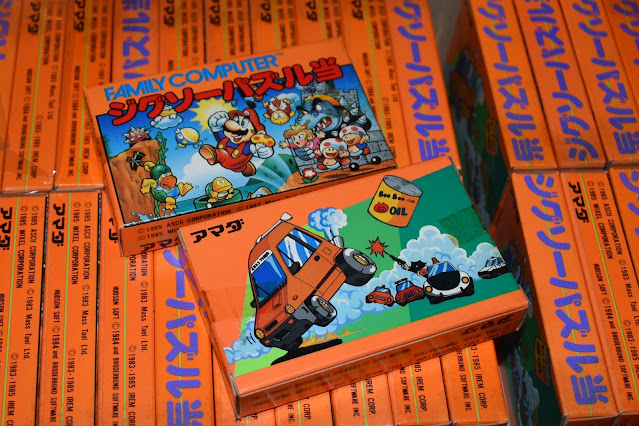 They are so cute to hold, slightly smaller than a Famicom cart. 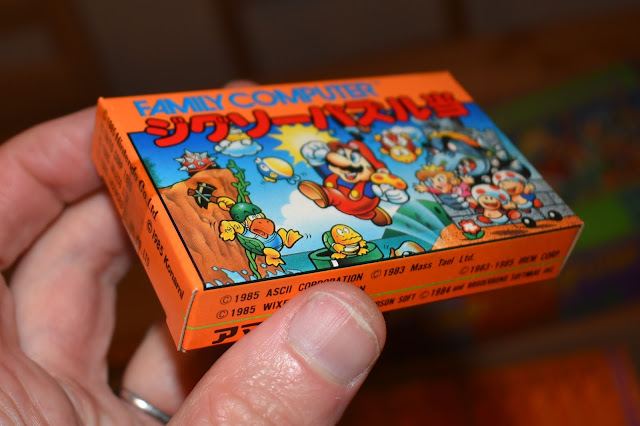 Despite the cover art being the same on all of them, they don't all just contain Super Mario Bros and City Connection puzzles.  Rather the puzzles are a random assortment of games from the Famicom's early releases.  I haven't opened any of mine to see what is inside, but I've found a few online like these which give a representative sample. 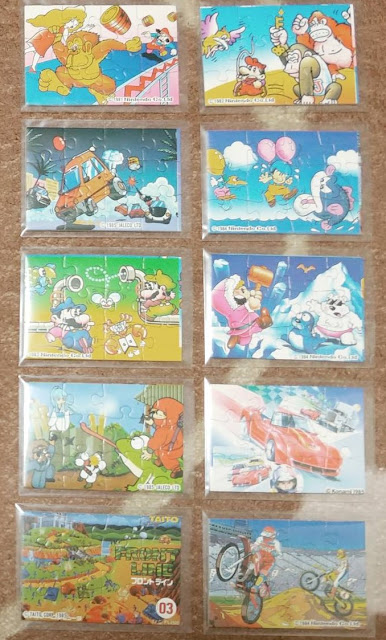 I think all of those games came out in 1985 or earlier so I would date these to around then.  I've also seen puzzles of 10 Yard Fight, and Route 16 and Sky Destroyer are also featured on the big box so there are probably puzzles of them out there too. I'm not sure how many exist in total, no checklist is known to exist of them.
You might ask why there are three bigger boxes containing larger puzzles and 40 boxes containing smaller puzzles.  The three bigger ones weren't sold in stores, they were prizes.  Kids would buy the little ones (which cost 50 Yen each) and out of the forty in the box, three were "winner" puzzles, which contained something on the inside which the kid could redeem for one of the three prize puzzles.
The box I have is complete, in the same shape as it would have been when distributed to toy stores.  This allows me to know exactly which of the three were the winner puzzles, since they came packaged in a plastic bag to allow the store owner to know which was which so they could randomize them. The three in the upper left hand corner of my box are still in the bag, so they must be the winners! 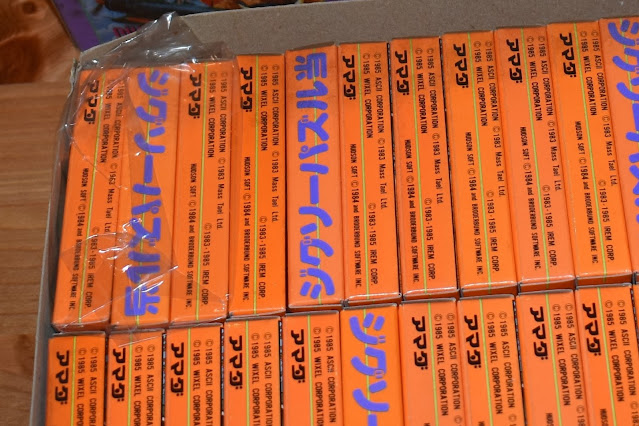 These things, particularly whole unopened boxes of them, are pretty rare so I was super psyched to be able to pick it up at a reasonable price.  What is a reasonable price?  Well, its way more than I would have paid for something like this 10 or even 5 years ago.  But that is ancient history (sadly).  There is just one other of these available for sale anywhere in the world right now and this is the starting bid: 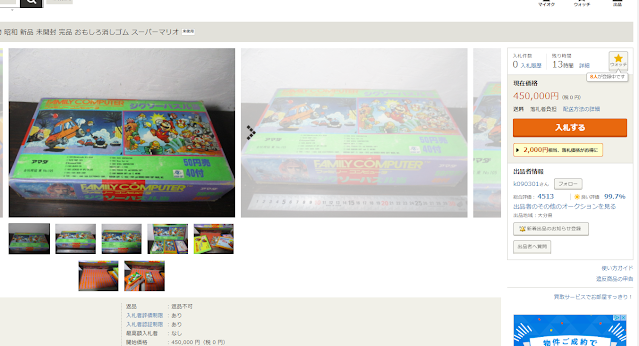 That is 450,000 Yen, about $4500 US.  I did not pay anywhere near that much for mine (as proof of that I offer as evidence the fact that my wife has not killed me), and I doubt that anyone is going to buy it at that price.  But with the absolute insanity of vintage game related prices over the past year, you never know.  These things are ridiculously hard to find and pretty cool, so I wouldn't be too surprised if some tech millionaire with money to burn dropped it on something like that.
Anyway, I'm glad I secured one for my collection.  As with my previous posts about Famicom Menko and Famicom Milk Caps, there aren't any checklists of these puzzles out there and very little information exists about them, so I'm kind of having fun delving into this end of the hobby where I can shed some light on these things.  These aren't the only Famicom puzzles Amada released, so another side project for me will be to try to put together a catalogue of all of them out there.
UPDATE!
After writing the above post I just found this tweet from last year which contains still images from a TV show on Fuji TV (which I think might have been Game Center CX?  Not sure) that did a feature about these puzzles.  It answers some of the questions I wasn't sure on. 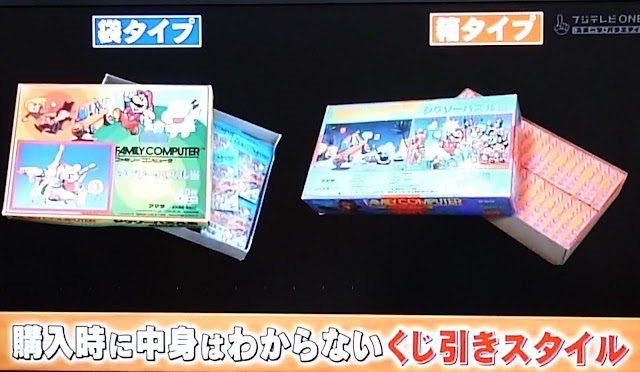 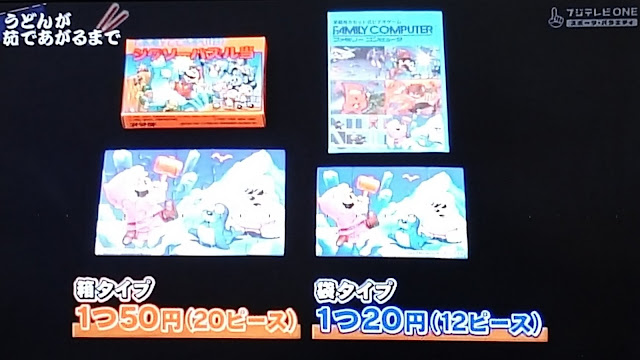 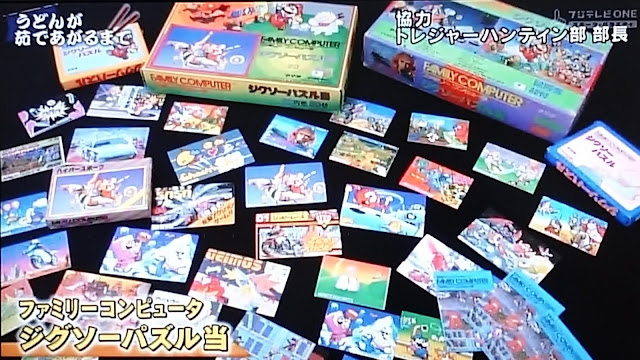 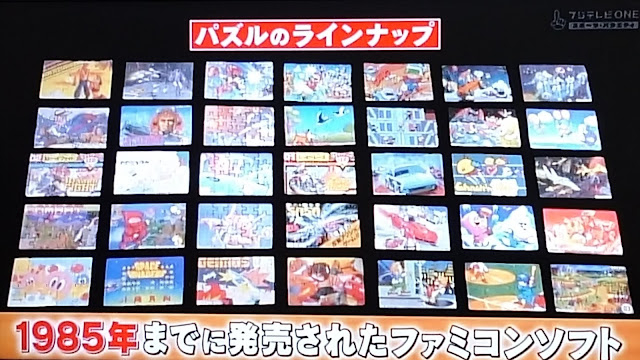 From these we learn a few interesting things about these types of puzzles.
1.  The puzzles were issued in 1985 in two types.  One (the one I have) was distributed in little boxes containing 20 piece puzzles which sold for 50 Yen each.  The other (which I don't have) were sold in little envelopes containing 12 pieces which sold for 20 Yen each.
2. Most importantly, the last image there shows all the games that were featured on the puzzles (at least the bigger 20 piece puzzles), so we can create a checklist!  Almost at least, some of them are hard to make out due to glare.  This however is a tentative checklist, if anyone can identify the two I couldn't (which might be two from among Championship Lode Runner, Mach Rider, Bomberman or Binary Land, but I can't tell from the picture), please let me know!
Super Arabian
Star Force
Wrecking Crew
Super Mario Bros
Lode Runner
City Connection
(Not sure)
Challenger
Sky Destroyer
Formation Z
Duck Hunt
Elevator Action
Devil World
Balloon Fight
10 Yard Fight
(Not sure)
Clu Clu Land
Zippy Race
Route 16
Chack n Pop
Exerion
Field Combat
Ninja  Kun
Hyper Sports
Astro Robo Sasa
Road Fighter
Ice Climber
Hyper Olympics
Nuts & Milk
Space Invaders
Geimos
Yie Ar Kung Fu
Urban Champion
Baseball
Front Line
Posted by Sean at 10:13 AM