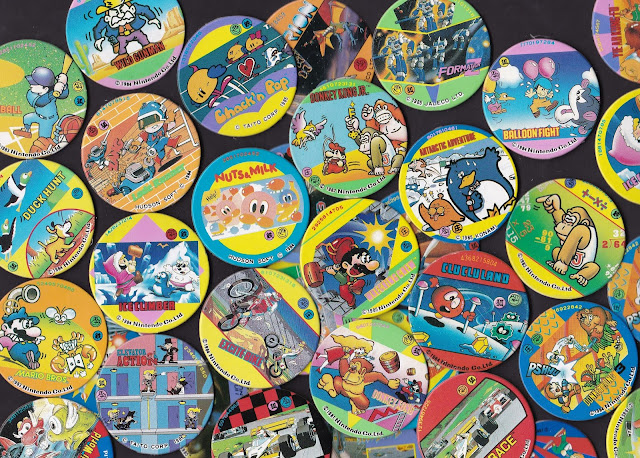 I picked these up the other day, a big pile of Famicom menko.  They are spectacular.

Menko are cards that Japanese kids use to play a game that mainly involves throwing them at other menko on the ground. It is very similar to pogs, though menko have a much longer history in Japan.

There are a few different kinds of Famicom menko out there which were sold in the 1980s, all of them I think  produced by a company called Amada which made a lot of Famicom related ephemera.  About 3 years ago I wrote a post about snagging some rectangular shaped Famicom Menko. The ones I got this week are round and come from a different set, but likely from the same maker.

I have to say, I like these round ones WAY better than the rectangular ones.   One problem with the rectangular ones is that most of the pictures on them are just screen shots from the games which, while kind of cool, also means some of the cards are pretty dull to look at (not all, but probably like half). 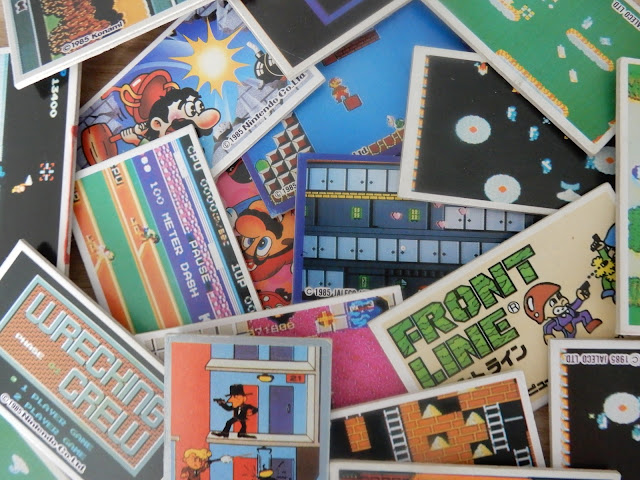 With the circular ones though all the pictures are extremely colorful, eye catching compositions which incorporate the game's box artwork.  Which is AMAZING!  Put them in a pile like the ones I have in the top picture on this post and they just blow you away.

Another cool thing about these is that they were likely issued fairly early in the Famicom's life (all the games were released in 1985 or earlier so probably in that year) so it features some of the most iconic titles out there - Donkey Kong, Mario Bros. Ice Climber, Balloon Fight and so on.  Most of the games are Nintendo's own releases, but there are also games from Konami (Antarctic Adventure, Yie Ar Kung Fu), Taito (Elevator Action, Chack n Pop), Jaleco (Ninja Kun, Exerion, Formation Z) and Hudson Soft (Nuts & Milk, Star Force, Lode Runner, Raid on Bungling Bay).

So anyway, if you are looking for some more Famicom hidden treasures out there, I recommend putting the round menko on your list.