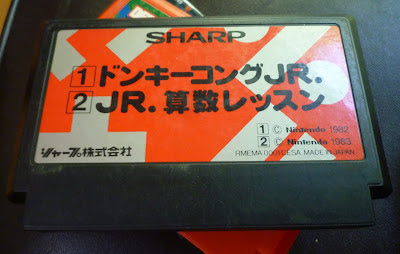 One of my recent Yahoo Auction purchases was the above little footnote in the Famicom`s history, the Sharp Donkey Kong Jr/ Donkey Kong Math multicart.

This is a pretty hard cart to find but it has an interesting place in Famicom cart history. This was never sold individually but came as the pack-in cart with the Sharp Famicom TV, a TV that came with a Famicom built into it (in other words the most amazing TV ever made).

Since I already have both of the games I mainly just wanted this for its interest value. Its a real conversation piece. Well, actually no I suppose it isn`t. I don`t think I`ve ever had a conversation about Famicom collecting with anyone before, save online.

There weren`t a huge number of Sharp Famicom TVs made so these carts are among the harder to find ones out there and usually retail for about 3,000 yen (40$) or so.

I suspect that the creation of this multicart may have been the result of Sharp getting the license for Donkey Kong Math, then suddenly realizing that nobody would ever buy the TV if it only came with Donkey Kong Math. They then entered some marathon all night negotiations with the folks at Nintendo, begging them to let them include a real game - ANY real game - alongside the crappy one that no kid ever wanted to play. Nintendo eventually gave way and let them add Donkey Kong Jr to the cart.
Posted by Sean at 4:55 PM