Why the Famicom Has Aged Well Part 2: No Planned Obsolescence 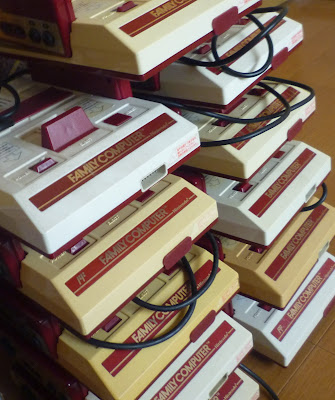 This is the second part in my series examining why the Famicom has aged well. Oh boy.

This time I make the basic argument that the Famicom has held up well simply because it was designed to do so. In this regard it is a wholly different, and vastly superior, creature than the type of consoles that producers are interested in making today.

I start off with an interesting, though not entirely scientific, comparison. Here is a pile of 11 old-school Famicoms: 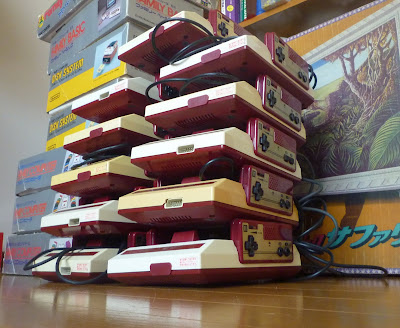 These are all of my red and white Famicoms, gathered here and there over the past couple of years. Here are a few relevant statistics about this pile:

1051 games were released for this console.


I think these stats are fairly impressive, and I'll be referring back to some of them throughout this post. The first one I want to draw everyone's attention to is the fact that 82% of these 26 year old consoles are still in working order.

Compare that with this rather shocking article about the failure rate of the current generation of consoles. Within 2 years of purchase, a whopping 23.7% of XBox 360s and 10% of Playstation 3s had failed. Within 2 years! The Wii was the only one with anything near a respectable rate of 2.7%.

These were all, it should be pointed out, purchased new and not damaged by their owners (ie they just stopped working on their own without anyone dropping them, etc.)

Lets take the PS 3 as an example as its failure rate falls roughly in the middle of the 3. If we extrapolate that ten percent every two years forward for 26 years we are left with only 25.41% of PS3s that have not failed. Yikes.

Of course we have to account for the fact that Sony is repairing the ones that failed under warranty. I don't think this will make much difference in the long run though as their warranty only lasts for 1 year (though it can be extended, I doubt few would pay to do so). Also we have to take into account that the 10% per year failure rate is for brand-spanking new models. As these things age it is reasonable to assume that the failure rate will go up. It is hard to tell how much it will go up, but I think it is safe to say that far fewer than 25.41% of PS3s currently out there will still be functioning 26 years from now.

Again - compare that with these babies: 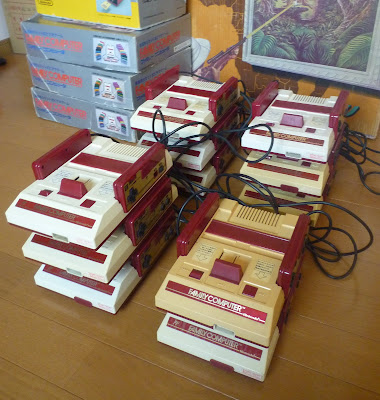 Almost all of them come from JUNK bins, yet 82% of them are still working after 26 years.

The gist of what I am getting at here is succinctly laid out in Table 1-1 below.

To appreciate the significance of the findings in Table 1-1 it is necessary to discuss a concept that has been slowly creeping into the video game world for some time now: planned obsolescence.

The idea is simple and probably something you all have a visceral hatred for. Manufacturers deliberately making their products less long-lasting so as to force you to buy more of them. The classic example is the light bulb. Early light bulbs produced in the late 19th and early 20th centuries were quite long lasting. Then in the 1920s the major bulb manufacturers realized they could sell more bulbs if they just made lower quality ones that burnt out quickly. So they formed a cartel and agreed that they would not make light bulbs which lasted more than 1,000 hours.

Video game makers aren't quite that evil, but this sort of thinking is clearly working its way into the industry. The Famicom was made to last - and it has. Current gen consoles much less so. This isnt' necessarily part of some evil plan by the makers - the fact that current consoles are much more complicated and have moving parts explains much of the difference. The old Famicom Disk System for example is way worse than the Famicom, simply because of that bloody drive belt. 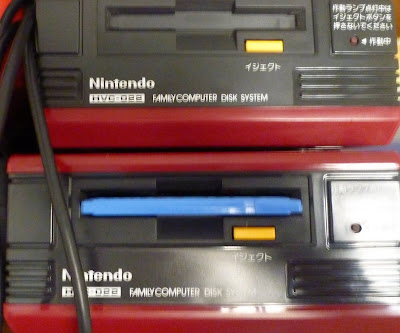 So I'm not saying the manufacturers are deliberately designing consoles to break down quicker, though in fact the consoles (except maybe the Wii) do seem to be doing just that. I think its more a case of the manufacturers simply not caring if the consoles last longer than a few years, which is how long they figure they'll be able to milk them as cash cows and then move on to the next gen.

Where planned obsolescence is coming into play with the newer stuff is more with what is generally referred to as "systemic obsolescence". That is, where something like software becomes incompatible with newer systems and hence obsolete.

You can see that the video game industry is consciously moving towards making every game you buy obsolete in this sense within a few years. I don't mean obsolete as in "outdated" but obsolete as in "cannot be used at all". This article here in which the author relates his frustration at being unable to play his copy of Heavy Rain because the Playstation Network was down illustrates the point nicely. As the writer aptly points out:

"...what does bother me is that Heavy Rain is a single-player game. There is no logical reason that the game cannot be played off-line, yet because of this reported error, I was completely unable to play the game at all."

This is the sort of thing people should be really mad about. The comments to the article generally responded by saying stuff like "Yeah, but don't worry. Sony fixes these problems quickly and the system will be back up quick, so why are you complaining?"

This kind of thinking misses the long-term point though. That game will only be useful for as long as Sony is willing to incur expense to maintain the Playstation network for PS3 users. Do you really think they are going to still be doing that 26 years from now? The answer, I think, is a resounding "no". When Sony decides (as it will) that it wants everyone to buy PS4s and ditch their PS3s, all they have to do is flip a switch and presto - your PSN dependent game becomes useless.

I'm not saying that they will do that, I don't know. But the fact is, with Famicom games (and of course all old games) you don't have to worry about that. You know that so long as the thing is physically fine, it'll work. It will never be made obsolete to the extent that you cannot use it.

Of course most new games still don't require a network to function, but I predict that within a very short time, pretty much all video games will be released in this way - your continued use of it will after a certain contractually guaranteed time period be completely at the whim of the manufacturer. It'll all be digitally distributed and your use of the game will be dependent on them completely. This is the sort of thing that I dislike strongly. When you buy a physical item, you acquire full property rights to it. You can use it and dispose of it as you see fit.

When you buy something digitally, it is more like you are buying a service rather than an actual product. The company always has a string tied to the thing you bought - such as through making your use of it dependent on a service (like the PSN) that they control. You can't dispose of it as you see fit, but they can.

I think people should be concerned about this not just because of the fundamentally anti-consumer bent all of this has but because of broader concerns related to the environment and social responsibility. This point can best be summed up in one image: 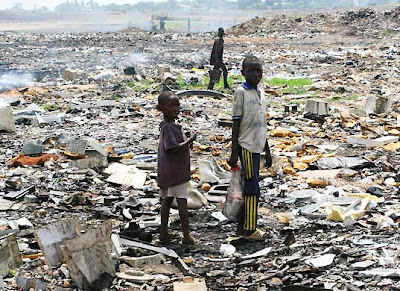 This is where E-waste ends up. Poor countries with no effective health or environmental regulations where kids scavenge the toxic components for metals.

You know what doesn't end up as E-waste? Famicoms.

You know why Famicoms don't end up as E-waste? Because of what I wrote above. Famicoms are durable and they were NOT deliberately engineered to become obsolete within a few years. All 1051 game cartridges still work on them. This means that there is still a thriving market for used Famicoms even though the things are now 28 years old. Even broken ones don't usually get thrown out as they can be scavenged for parts (hence my keeping the two Famicoms I have which don't work).

Today's consoles though? Nope. Future E-waste is what they are, unless the console makers get off their asses and start taking the issue seriously (which they, and Nintendo in particular, don't). They aren't built to last and the games they have are increasingly being designed to no longer work after a few years.

To a certain extent this is by accident - the increased complexity of the consoles seems to naturally lend them to breaking down easier than simpler cartridge based consoles of the past. To a large extent though this is deliberate policy by the game makers themselves, who have a very open hatred for the used game market and seem to be doing everything they can to snuff it out by increasingly making new games nontransferable and completely useless without their networks.

So anyway, that was a much longer post than I thought it would be. But basically it all boils down to this: Old consoles like the Famicom are built to last and will never become obsolete. This is good for consumers and good for the environment. The video game industry today hates that. It wants you to have to buy stuff again and again and it really doesn't seem to give a crap about the consequences. This is one of the reasons I never buy new stuff. Partly its economic considerations, but to a large extent it is because I find all of this very disturbing and want no part of it.

To end on an upbeat note, I present me latest salute to the Famicom: A new world record in console-stacking. 11 consoles. 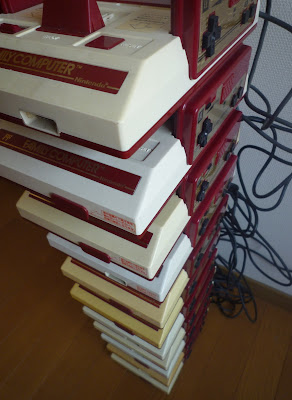 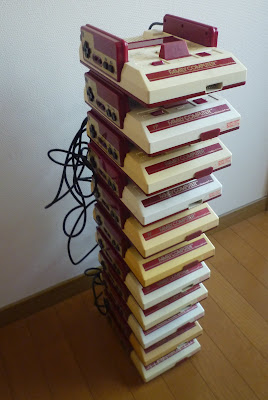 Email ThisBlogThis!Share to TwitterShare to FacebookShare to Pinterest
Labels: Famicom Consoles, Random Opinions, The Environmentally Friendly Famicom, Why the Famicom Has Aged Well