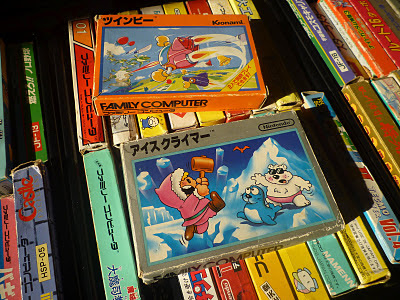 I have to say that Twin Bee and Ice Climber are two of my favorite Famicom game boxes.

The designs that Nintendo and Konami used on these early box arts are almost identical, which is a fact I find kind of interesting. They are of the same size, the artwork takes up almost the same amount of space and is in the same position on the front of the box, and the name of the game and the company name are also located in the same position.

The only real difference is that Konami made theirs orange while Nintendo made theirs gray. I`m not sure if this was due to a lack of originality on Konami`s part or just coincidence. It really seems like they just took the Nintendo design as a model for their game boxes and somebody in management said `OK, just be sure to write Konami on it and make it......oh what the hell, orange.`

I`m not sure which of these I like better. Twin Bee benefits from the strong contrast between the orange border and the blue sky in the artwork. One of the things (in fact the only thing) I remember from my high school art class is that the combination of orange and blue are supposed to be the most eye-catching mix of colors. That is why so many advertisements feature that color scheme. So Twin Bee has that going for it.

On the other hand, even though gray is generally a pretty boring color, it does seem to work quite well on the Ice Climber box. It is almost completely unnoticable when you look at it. All the viewer`s attention is focused on the artwork itself, which accentuates that most important of features. Whereas the orange of the Twin Bee box distracts, the gray of the Ice Climber box just fades into the background. We are thus left to evaluate it based mainly on the artwork itself, which I rather like. I`m not too sure why....I think it is the polar bear with the shades.
Posted by Sean at 11:37 AM