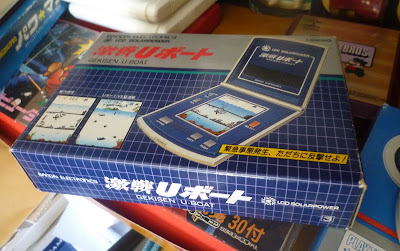 This week is my anniversary. Hooray! Anniversaries mean, of course, presents. This is our eighth, which according to Gormley's Wedding Anniversary Gift Guide is the "Handheld Gaming Device" Anniversary. Lucky for me!

To mark the occasion my astoundingly awesome partner purchased not one but two amazingly awesome retro handhelds. The first was the Bandai Gekisen U Boat LCD Solar Power (long name, I know).

This game was released in Japan by Bandai in 1982 as part of a series of solar powered handhelds. You can see a contemporary catalog ad for them here. I believe that these were also released in North America with just the Japanese lettering removed.

My copy is in perfect mint condition: 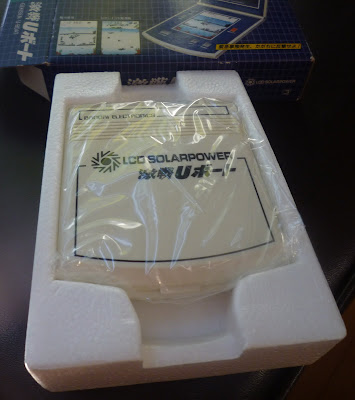 It unfolds into a picture of blue perfection: 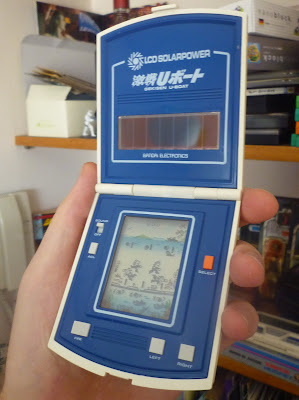 I love the fact that these things are solar powered. I've been playing it all day and the panels are quite effective - the thing doesn't need to be directly under the sunlight to work, a room with adequate lighting or indirect sunlight will do.

In addition to being environmentally friendly, the main advantage is that it saves you the hassle and expense of buying batteries. The downside is that you can't use it in a dimly lit room, but that isn't much of a problem for me.

It is a pretty decent game. There are two levels. In the first level you are a sailor in a submarine that is sinking after being hit by a depth charge dropped from a destroyer. The game actually begins with a primitive "cut scene" of that happening: 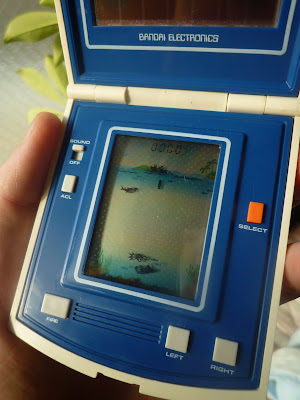 Water gushes in at various points and you have to move the sailor around to plug the leaks. The leaks spring in rapid succession from the start, so it is merciless on beginners but once you get the hang of it its pretty fun.

After achieving 500 points, the game switches to level 2. In that game you take control of the submarine and try to sink the destroyer that is dropping depth charges on you.

As of yet I have not gotten to 500 points on level 1 so I don't know how fun that is, but I'm pretty psyched about trying it out.

My second present was another retro handheld, I'll do another post about that one soon.