An Afternoon Trying to Break the Famicom Galaxian Record 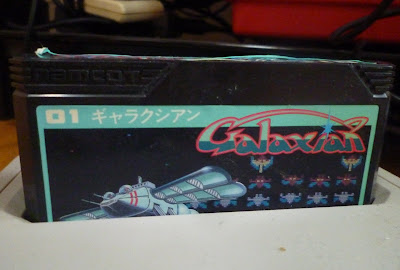 I finally got around to watching the documentary "King of Kong: A Fistful of Quarters" the other day. If you haven't seen it yet, I recommend it. A very entertaining yarn about one modest man's quest to wrest the world record for Donkey Kong away from the incumbent, Billy Mitchell.

I've read that the filmmaker's took a lot of liberties with the facts, which is kind of unfortunate, but I nonetheless found it to be a worthwhile way of spending two hours, if for no other reason than to simply see a movie with a lot of retro video game stuff in it.

Watching the film has inspired me to see if there are any video game records that I might be able to challenge on the Famicom. The records at stake in the film are those kept by Twin Galaxies, which in the movie is show to be the official scorekeeper relied on by Guinness. So I thought I might start there.

In order to break a record of course the first thing you have to do is choose a game. I have chosen "Galaxian", which I have played a lot of and pride myself on being reasonably good at. Not world-record setting good, mind you, but still pretty good.

So I wandered over to Twin Galaxies' website to see what the world record for Galaxian on the Famicom is. I was greatly disappointed to discover that despite billing themselves as "Twin Galaxies International" they don't list high scores for Famicom games.

As a second best solution I looked for the NES record, but unfortunately Galaxian was never released on that one.

So I am left with a couple of options. One is ironically this blog, in which I posted a list of Famicom high scores from 1985 a couple months ago which included Galaxian. The high score there was 85,030.

The second option is to use the Arcade score from Twin Galaxies which is....hold on a second I have to look this up.....

OK, option one it is!

Being a rainy weekend afternoon and with the wife out for a couple hours I thought I'd give the 85,030 point record a run for its money.

My first effort yielded this: 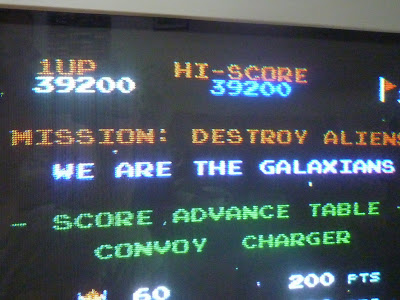 39,200. That is almost half-way there. Not too bad actually. This is about an average Galaxian score for me, if I get over 40,000 I'm usually quite happy with myself.

Take two, however, yielded this: 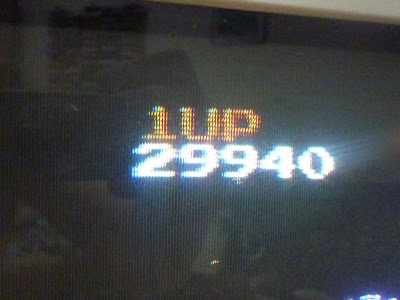 Ouch. Not a good game at all. I lost my first life on the third level and it was downhill from there.

I thought about the need to alter my strategy in some way. After about 10 good hard minutes of thinking I came up with this: 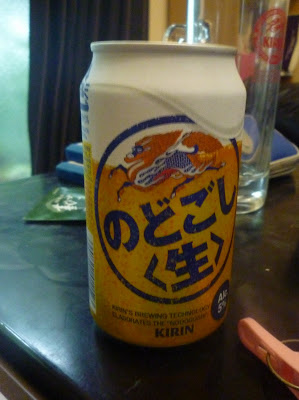 Absolutely brilliant. On my next try I exceeded the half-way mark: 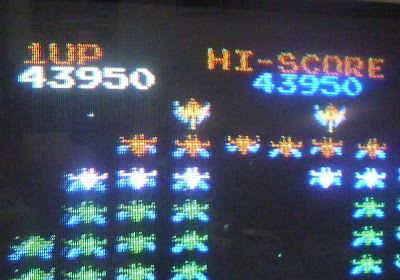 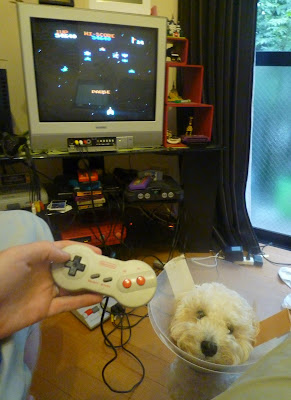 My dog just got fixed a couple days ago so he is wearing this conical thing to prevent him from scratching the stitches. The whole experience has made him rather needy, emotionally speaking. He wanted some attention, which he lets me know by jumping up and scratching me until I give him some. I paused the game and spent a few minutes playing with him. That broke my concentration and within 1,000 points of starting up again the game was over: 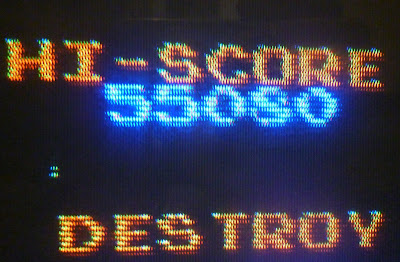 A bit more practice and I should be able to make it. When I do, I'll post something about it here.
Posted by Sean at 6:55 PM