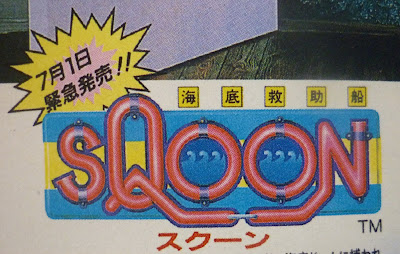 Apologies for this post's title. It is very hard to think of plays on the word "Sqoon". "Spoon" would be the obvious choice, but I couldn't come up with anything witty for that either. 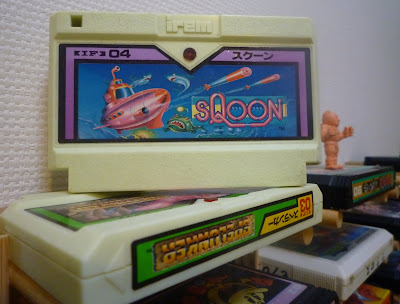 I like Sqoon. It is a really good game. 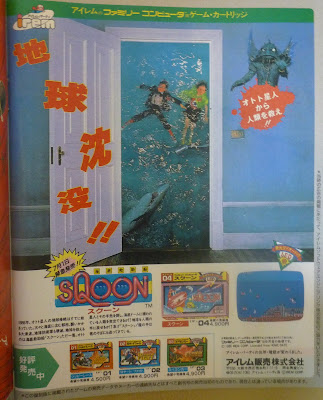 No, wait. I should probably say more.

The thing that first attracted me to this game was the cart, which looks pretty cool like all the Irem carts from that era. The game itself is quite good too. You just steer your little submarine around and shoot strange fish and try to rescue these little humans before they get eaten by killer whales.

I don't think there are any other submarine games for the Famicom that I am particularly fond of. The only other game in the genre that I have tried is "Deep Blue" on the PC Engine, which is massively difficult and nowhere near as fun.

Hardcore Gaming 101 has a pretty good article about Sqoon. The writer notes its place in colorful submarine history - in between the Beatles' Yellow one and Steve Zissou's one, which is also yellow. I like Steve Zissou's one myself. I think Sqoon is the type of adventure Zissou would have embarked upon at some point. It makes me want to wear one of those cool track suit uniforms for team Zissou when I play this game. Just to, you know, represent.

Sqoon is a bit tricky as a game, I have a tendency to run out of energy too quickly, but at least I feel like I have a shot at going somewhere in the game each time I play.

Email ThisBlogThis!Share to TwitterShare to FacebookShare to Pinterest
Labels: Sqoon