Atari on the Famicom: Millipede and Stargate 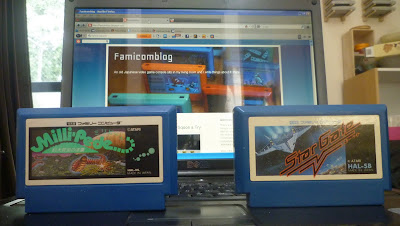 Atari never really made much of an impact on the Japanese gaming market like it did in the U.S. They released a version of the 2600 here in 1983 (the Atari 2800) which along with my beloved Epoch Cassette Vision was quickly crushed by the Famicom.

Atari did at least, however, release a couple of 2600 games on the Famicom - Millipede and Stargate (aka Defender II).

Judging from the difficulty I had in tracking copies of these two down, I think its safe to say that neither of these were big hits on the Famicom. That said, I really like them. This is probably due to my fascination with all things primitive. To put it mildly, neither of them push the limits of the Famicom's hardware. The graphics are incredibly simple - basically what you would expect from Atari 2600 games.

What they get right is the basics. Fast arcade gameplay that offers immediate satisfaction in the form of stuff getting blown up by you. In Millipede you just shoot the Millipede before it gets to the bottom of the screen. In Stargate you just go around in a horizontal landscape (defined by nothing more than straight lines) looking for enemy ships to shoot. When you shoot them all off you go to the next level.

The only thing you are trying to do with both is rack up points - which is the best kind of game in my opinion. No complicated back stories, no massive worlds to explore, no BS - all these things have to offer is pure action. I wish the Famicom catalogue had more like them.
Posted by Sean at 10:56 AM