A Day at a Japanese Game Center: One More Reason Arcade Fans Should Visit This Country 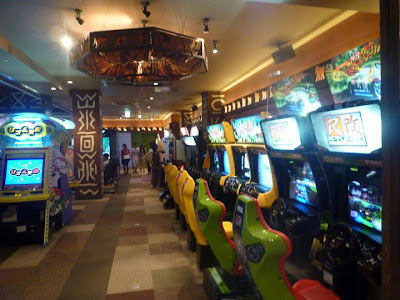 In addition to amazing retro game shops, I suppose one of the other things Japan is famous for among video game enthusiasts is its game centers.

Its pretty well known that arcades have been in decline around the world for a long time, and while that trend is also observable in Japan (declining population = fewer young customers), there are happily still a ton of cool arcades in every city.

I didn't used to go to arcades very often though. Not because I didn't enjoy them but more because it was hard to stomach slapping down 300 yen (about 4$ with the current exchange rate) to play a game for five minutes. I mean, I've paid less than that for entire consoles.

That all changed for me recently though when I found out about Round 1 downtown. It is a massive 8 floor complex full of games. The best part though is that they have an all-you-can-play fee structure. 1400 yen (about 18 bucks or so) will get you three hours of unlimited play on all the games they have on the 3rd, 4th and 8th floors.

So the missus and I went over on our day off yesterday for a few hours of fun.

It is a really great place. I was a bit worried that there would be huge lines at the popular games or that they wouldn't have a good selection on those floors, but was pleasantly surprised to find that wasn't the case. They had a huge selection and even the popular ones didn't have lines (and if someone was using one you wanted to play, you could always just play one next to it until it became free).

They had baseball games: 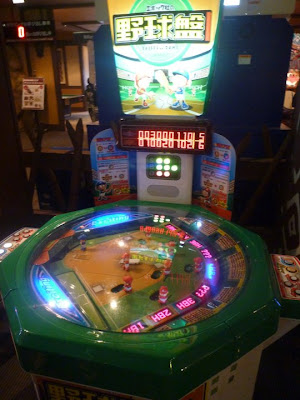 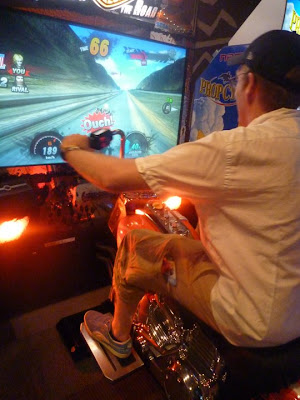 Ball throwing games (this was my favorite): 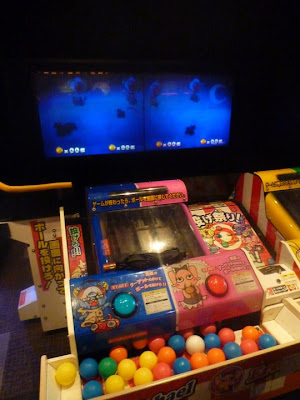 And a ton of other favorites a la drumming, dancing, guitar playing, racing, shoot em up and other genres that I didn't take pics of. All free once you paid the entrance fee. The eighth floor was actually the roof, which had batting cages, a basketball court and other outdoor sports games. The third floor also had non-video game entertainment in the form of billiards, darts and ping pong. We tried just about everything. It was awesome.

The entrance fee also got you 2 free tries at the UFO catcher (we didn't get anything) and 20 coins for the entertainment area, which is full of casino like games. We spent ours on this thing: 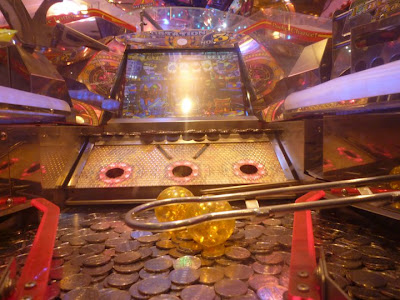 You basically just shoot your coins into there and try to knock other coins off and into your cup. Basically it is a no-win game, but as it was free we enjoyed it for about 10 minutes.

Unfortunately what Round 1 is lacking in is retro video games. They had a Gradius 4 machine, but that was about as far back as they went. Still though, this type of place is another must-visit for video game fans who land on these shores.

Email ThisBlogThis!Share to TwitterShare to FacebookShare to Pinterest
Labels: Arcades, Round 1