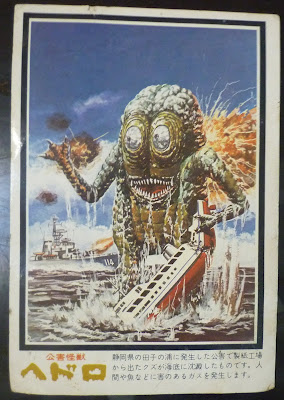 In terms of cover art, my favorite Famicom cart (at least out of the ones I have - 636 and counting) is a little-known game called Daikaijyu Deburasu. I don't particularly like the game itself. Its a strategy game in which you control an army tasked to defend Tokyo from a giant monster which has been hatched from an egg that fell into the sea from outer space (a good review of the game in English can be found here). Good story, but I'm not a fan of the strategy genre, so I don't really play it.

What I love about it though is this: 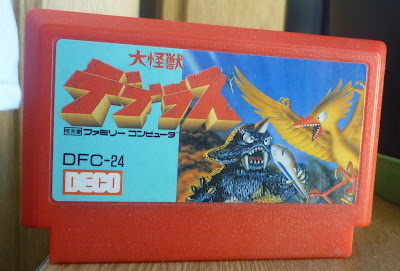 This is very retro. Actually, it was very retro when they made it 20 years ago. So now it is, like, "double retro" or something.

Oh wow, I just blew my own mind.

Anyway, I like it because it looks like something taken out of a movie poster from a Toyo film from the 70s. Which, coincidentally, is what I bought today and oh so want to share with everyone. As Famicom collecting dovetails nicely with the more general retro-Japanese-nerd-stuff collecting genre, I hope you won't mind the momentary detour from the regularly scheduled Famicom content of this blog.

I was wandering around Omocha Souko this afternoon. They have a substantial non-gaming section that sometimes turns up a few gems. A new box full of junk in their toy section caught my eye and in it I found a bag containing these: 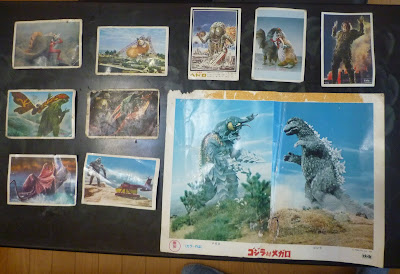 They are a bunch of postcards produced by Toyo and NTV in the early 70s and a poster for the movie Godzilla vs. Megalon, released in 1973. They were in pretty rough shape, but for 200 yen for the lot (about $2), how could I say no?

Japanese films certainly had some extraordinary, if odd, heroes and villains in the 1970s. Here we have Gari Gari and Bero Bero lovingly depicted in front of the backdrop of....a....generic gray studio completely bereft of any decor: 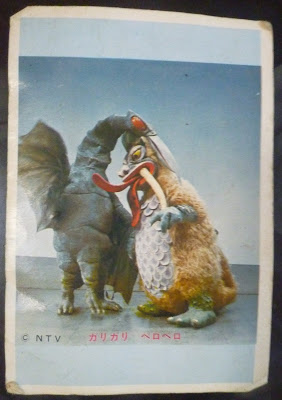 Its not entirely apparent from the photo if they are meant to be fighting or engaging in some sort of mating ritual. Gari Gari seems to be biting Bero Bero's head while Bero Bero impotently tries to fight back with his double tongue, which couldn't have been much of an effective weapon.

Here we have Sanda fighting a giant octopus in a very epic-looking scene: 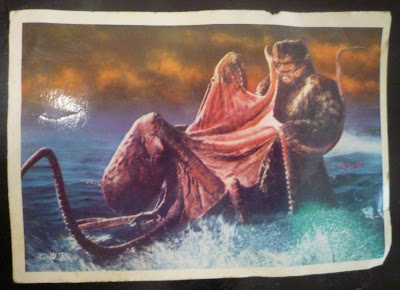 And I think this is Ultraman, though there are so many Ultraman rip-offs out there that I'm not sure if this is him or one of the rip-offs. Whoever he is, he is dealing with a creature known as Giradorasu: 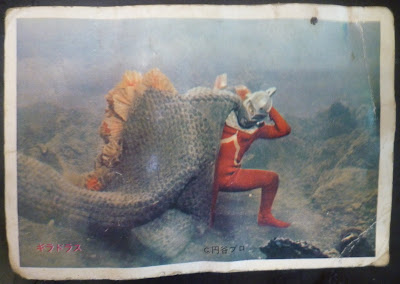 And here we have Mekanigongu in an as of yet undefined relationship with a rather pleasant looking helicopter: 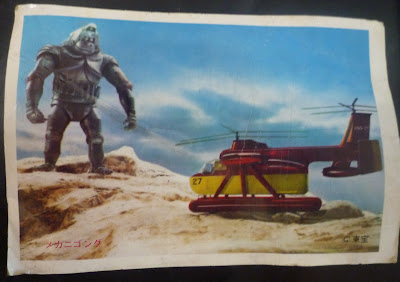 What I really love about these postcards from the point of view of a Famicom collector is that they provide an excellent visual window into the shared cultural experience of the makers of many of the Famicom's great games.

The guys who made Famicom games in the 80s had, as children in the 60s and 70s, been raised on films in which these were the heroes and villains. This is reflected in a lot of Famicom games, not just Daikaijyu Deburasu. Its not hard to see the roots of some Famicom characters in these cards - Donkey Kong for example would have fit in nicely in any one of these movies.

Anyway, I really like these cards. Actually, I like them so much that they almost make me dislike my copy of Daikaijyu Deburasu.

I mean, these things are so campy and cheaply made that they fall into that "So bad they are good...no, make that awesome" category. These films were so poorly made that they are legend. The "goofs" section of Godzilla vs. Megalon at IMDB for example contains entries such as:

"The Jet Jaguar suit that is kicked back and forth by Megalon and Gigan is empty - the arms flail and bend at the wrists, showing that there is no one inside."

The kind of sloppy stuff you would expect to see judging on the quality of the postcards and posters above. 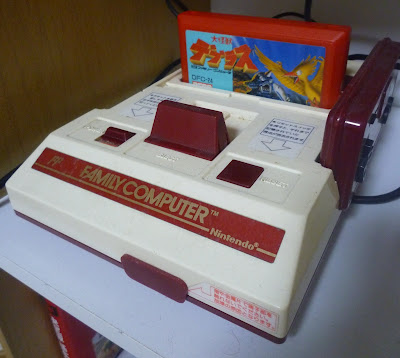 The Famicom Daikaijyu Deburasu cover though? It actually looks...kind of professional. Which, in a weird way, makes it less charming than the ridiculously bad art in some of these postcards.

Oh, what am I saying? I still love this game's art. It is, after all, the perfect companion piece for my new old movie postcard collection.
Posted by Sean at 3:04 PM