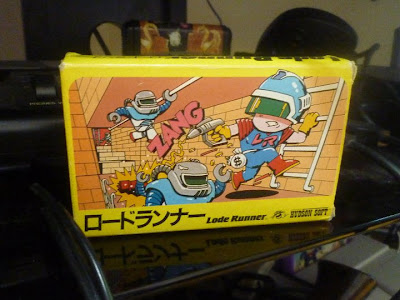 I thought I'd borrow an idea from Bryan's "which box art is better?" posts, only with a Famicom twist.

I picked up two boxed Famicom games the other day, Lode Runner and Raid on Bungling Bay. Both of these were made by Hudson Soft under license from Broderbund in the early 1980s. The carts of both feature the same cover art, which is very similar to that on the pulse line carts only without the pulse lines, but their boxes are completely different.

The Lode Runner box (above) is a bright cartoony one. I like it. It has a lot of color and the picture takes up almost the whole front of the box. This is also a really small box, its just slightly larger than the cart itself.

The picture is very similar to the game, except that in the game you don't have a gun. And the characters look nothing like that. But its got the gist of it. Walking up ladders, sliding along ropes, being chased by bad guys - Lode Runner's got all that.

The Raid on Bungling Bay one, on the other hand, is a hard one to figure: 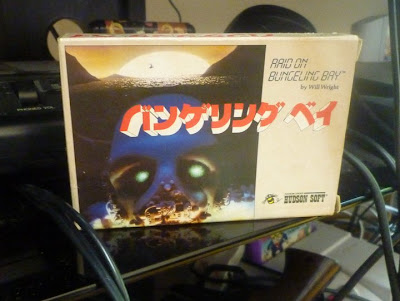 Raid on Bungling Bay is a game in which you control a little helicopter that goes around dropping bombs on islands. So the tiny little speck you can barely see silhouetted against the setting sun makes sense. But what is that face?

It seems to be some sort of cyborg, I think that must be the leader of the Bungling Empire? Or something? But we don't see anything like that in the game.

I actually like this box art. It is very dark and strange. It is the sort of thing that Dieter from Sprockets would have designed, or at least heartily approved of in a monkey-touching sort of way. Now is the time at HudsonSoft when we dance.
I just find the contrast between these two boxes to be kind of interesting. Same maker, same era, same general type of game, but radically different approaches to box art.
Posted by Sean at 11:44 AM