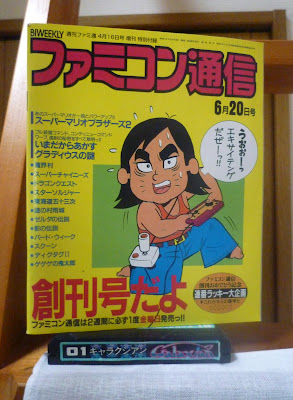 I scored a rather interesting piece of Famicom history today, a copy of the very first issue of Famicom Tsushin.

As kind of an interesting coincidence, this was published in June of 1986, making it almost exactly 25 years old.

Edited to add: at least it would have been. Reading the fine print I realized that this was actually a reprint of the first issue. Very cunningly disguised as the real deal, even the ads are all the same as in the original (as is the publication date). On the bottom of each page in small print, however, it states that it is a reprint and tells readers not to call any of the phone numbers in the ads as they don't work anymore. Guess that explains why it only cost 500 yen! And why it came with a towel celebrating the 800th issue, which I didn't notice until getting it home. This must have been made as part of some sort of commemorative promotion or something:

Anyway, Famicom Tsushin, for those who don't know, is a biweekly video game magazine in Japan that now goes by the abbreviated name of "Famitsu". It is another testament to the power of the Famicom back in the day that this magazine - which is not published by Nintendo and is a general video game mag - was named after the Famicom. It is far and away the most famous gaming magazine in Japan.

Anyway, despite being a repro, there is a LOT of interesting stuff in this thing which will provide me with ample material for a whole bunch of posts. I thought I'd start off with the info on pages 8 and 9 here: 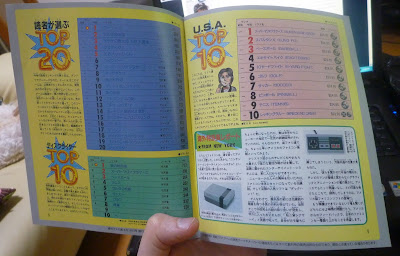 Here are the results in order.

On the right page, they display the top ten most popular games for the NES in the US at the time, based on sales. It provides for an interesting comparison:

They even have a little featured article about the NES in there: 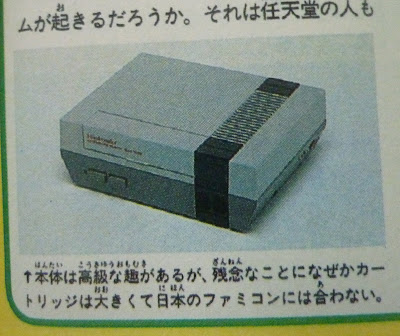 The caption under the picture reads

"The console is high class, but unfortunately for some reason they made the cartridges big, so Japanese Famicom carts won't fit it."

An early (perhaps the earliest?) example of somebody noting that it was too bad the NES carts didn't follow the Famicom pattern!