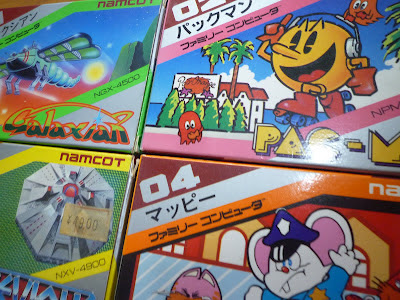 Some new `pieces` for my collection: the first four games Namcot released for the Famicom complete in box! 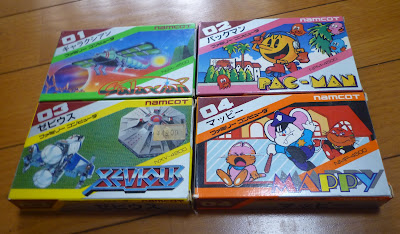 I`ve been wanting to get a set of the first 18 Namcot releases (they are numbered) complete in box ever since Bryan over on the Gay Gamer picked up a few of them a couple years back, the pictures he put up just knocked me out. I love the boxes on these, they hit all the right buttons for me: small, cardboard, colorful and with great, evocative imagery on the front.

I already had a couple from this series CIB but they are in the kind of `B-grade` level of games - stuff like Star Luster and Pro Wrestling. These ones however include Pac Man, the one I wanted the most! YES!

I found these on Yahoo Auction in part of a larger lot of boxed games. They set me back quite a bit, but I was massively impressed when I received them. Most of the other games in the lot were in beat up condition but these Namco ones are like new: 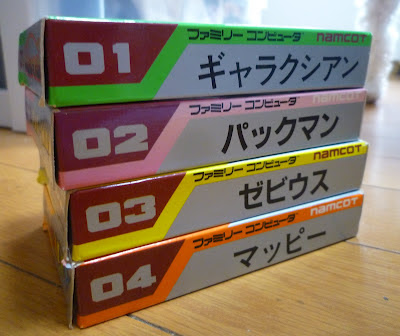 They only have some tiny wear on the flaps but other than that they are in perfect condition and look like they could have come directly off a department store shelf from 1984. The photos in the auction weren`t close up so I wasn`t expecting them to be this nice. In fact I was in a bit of a panic when I realized how beautiful they were as these are way too good to just casually toss on a random shelf with the rest of my games where they will get all wrinkled up (what I normally do with games). I had to empty out a plastic bin to put them in for safe keeping.

So my collection now has some showy mint stuff in it. I will not be putting these into hard plastic containers for disply or anything, but I will be keeping them in that plastic bin until I find some safe way of storing them.

Next on my wantlist for this series are Battle City, Warpman, Sky Kid and Burger Time - all of which have awesome cover art. And are probably going to cost me a bit of $$.
Posted by Sean at 3:26 PM