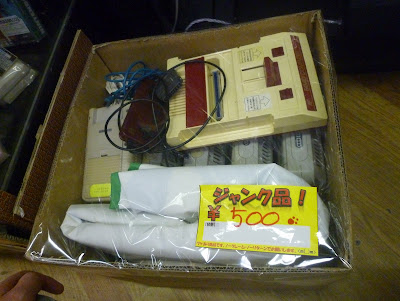 Yesterday I ventured out to a new retro-game store for the first time.  I had never been before because it is located all the way out in Dazaifu, which is about a 2 hour bike ride away, much too long a ride for it to have fallen into my regular rounds.

I`m going to do a full review of the store sometime this week because it is quite a good one, but in this post I thought I`d just bring attention to some of the crazy retro stuff I found in their junk section.  The above picture is of a box of stuff you could have for 500 yen (about 6$).  For that you get a Famicom (missing controllers), four Super Famicom consoles, a Gameboy, a mat game of some sort and a few other odds and ends in there.  That is a pretty crazy deal, even if none of the stuff works, but there was no way in hell I was going to pedal for 2 hours with that much crap so I gave it a miss.

Another interesting thing they had was this: 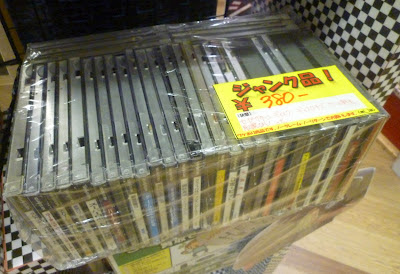 If I am counting correctly that is 30 Sega Saturn games for 380 yen (about $4.50), or about 15 cents each.  I don`t know anything about the Saturn so I don`t know if there were any good games in there but for that price?  Wow.

I didn`t buy that either though.  I have a rule against buying games on disc-based systems so the Saturn is not in my collection.

Anyway, I just thought these things were kind of neat.  I love finding bargains even if I don`t actually buy them!

I did however walk out of there with a huge pile of stuff that I did fell was worth pedaling two hours for.  That`ll have to wait for the next post.

Email ThisBlogThis!Share to TwitterShare to FacebookShare to Pinterest
Labels: Famicom