Only in Japan: Hi no Tori Gaou no Bouken 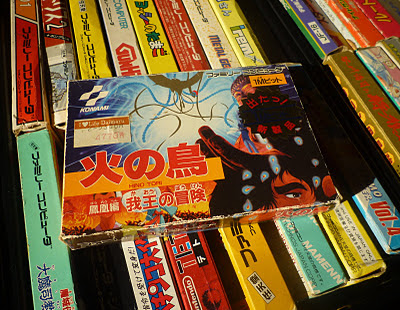 Hi no Tori is without a doubt one of my favorite Famicom games. I really don`t understand why it was never ported to the NES as it is one of the best platformers ever made for the system.

This is one of the games that I acquired early in my Famicom collecting days about 3 years ago. My wife had it when she was a kid and I bought it on her recommendation (back then I hadn`t devoted myself to acquiring every Famicom cart ever made and would only but the good ones).

There is a pretty good write up on the game at Strategy Wiki, so I won`t repeat too much of what is already out there.

Well, OK maybe I`ll repeat a bit of what is already out there. It is a side scrolling platformer based on a comic by Osamu Tezuka. You control Gaou, the hero of the game, as he progresses through multiple levels doing all the typical 8-bit side scrolling platformer type stuff (shooting enemies, jumping over stuff, etc). There are some unique actions that set this one apart though. Gaou can, for example, shoot (throw?) stone blocks. He can use these to build staircases, which are sometimes necessary to climb over gaping bits of scenery that are too big to jump across or what have you.

I still haven`t actually finished the game yet, my wife is better at it than I am. I bought a boxed copy (pictured above) of it recently for 500 yen, which was a really good bargain. It still has the original department store price tag on it for 4770 yen. I love it when game stuff still has original tags on it. This one was purchased at the Daimaru Department store, which is located downtown. I was there just a couple of weeks ago doing some Christmas shopping: 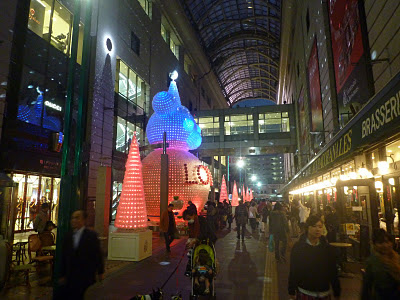 Anyway, that tangent in this blog post, complete with its tengential photograph, was brought to you by Famicomblog`s new sponsor, the Daimaru Department store. Daimaru: in Japanese the name just means `big circle`.

Related Posts:
- Only in Japan: Spelunker and Spelunker 2 Yuuja he no Chousen

Email ThisBlogThis!Share to TwitterShare to FacebookShare to Pinterest
Labels: Hi no Tori, Japan only Famicom Releases