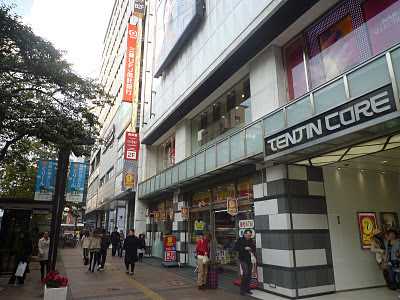 Another place I stopped at during my Christmas shopping last week was the Tsutaya downtown. Tsutaya is a major nationwide chain that started out primarily as a rental video/game/CD place, but now a lot of their locations also sell a variety of items, from used books to retro video games.

Just to provide a little autobiographical digression here I actually purchased a PlayStation 2 at a Tsutaya way back in 2001 when they were still relatively new and expensive. What can I say? I was young, irresponsible and had a steady job that paid a decent income (oh how I do miss those days). That was the only time in my life that I have actually purchased a video game console in the prime of its life, every other one I either received as a present as a child (Commodore Vic-20, NES) or have purchased as a retro console in the past couple of years (Famicom, Mega Drive.....well, everything in this blog basically).

About a year after that I actually had a rather serious bicycle accident in front of a Tsutaya that I had just returned a movie to and ended up with a broken elbow (very painful thing to break, BTW).

Er....why am I providing you with all this minutia? Oh yes, what I wanted to say was simply that until very recently despite having a lengthy history with Tsutaya I had never realized that they also sold retro games. This is because most of them including the ones I had frequented in the past didn`t. Somebody on Famicom World mentioned that their Tsutaya sold retro video games a couple months ago though and this got me interested. So I decided to start checking out all the Tsutaya in town whenever I happened to be passing by just in case.

So far the only one that has had any is the one downtown. It is quite a posh place, even the escalators are very bright and sparkly: 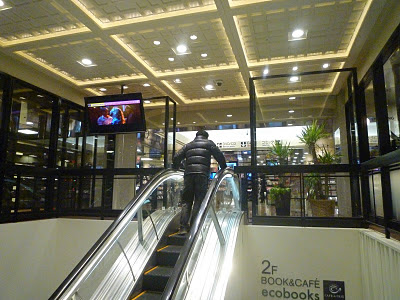 The retro game section is on the top floor. This is it: 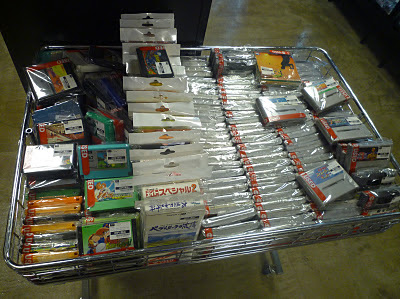 The contrast with the rest of the store could not be starker. The interior is very modern and tasteful. They have nice bookshevles in the bookstore floor with a little coffee shop. The modern video game section looks fantastic with loads of fancy displays. The retro game section is.....

A steel basket with a bunch of Famicom and Super Famicom carts thrown into it. 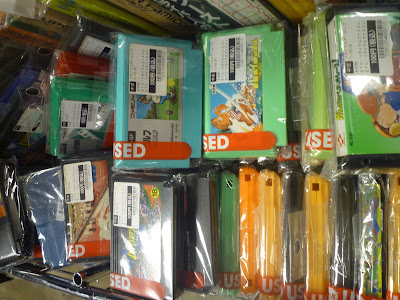 Not only is the presentation subpar, the selection is absolutely awful. Every Famicom cart they had was either sports, pachinko or Mahjong except for one copy of Tetris, which had a really messed up label. The Super Famicom games were exactly the same: not a good one in the pile.

The only upside is that they charge a flat 100 yen each, which is reasonable. Anybody else out there live near a Tsutaya with a retro video game section? I`m curious if they all suck as bad as this one.
Posted by Sean at 4:58 PM