I am Idiot Hear Me Roar 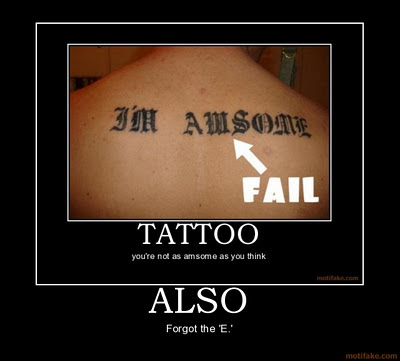 I just did a Google image search for the word `idiot` and of all the amusing things I found, I think the above best captures the essence of my stupidity.

Let me share with you here a tale of incredible incompetence in the field of diagnosing the problem with a retro console that seems to be broken. Like me you will laugh, you will cry, you will shake your head at the folly of human endeavour.

The story begins in April when my wife gave me an original 1977 Nintendo Color TV Game 15 Complete in its box. It was a thing of beauty and I spent a whole afternoon hooking it up to my TV. Unfortunately when I finally got it to flash something on the screen, this is what I got: 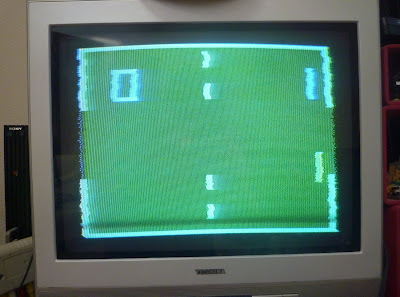 Notice, please, that there is something missing on screen in this pong game. There is a paddle on the right side, but the one on the left is nowhere to be seen.

My first reaction was to look at the console, which has a ton of buttons and switches on it: 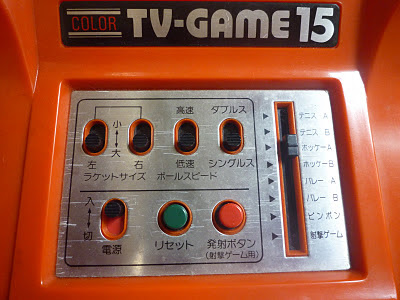 No matter what combination of pushing and switching I attempted, however, nothing produced the desired result. That left side pong racket just would not appear.

For what I did next I can turn to the blog post that I made here on that very day:

¨This puzzled me greatly. For about an hour after getting the thing hooked up, no matter what I did I could not get the paddle on the left (1player) to show up. I made my way onto the internet and after much surfing to no avail eventually stumbled onto this Youtube video. The guy is just showing the insides of his Color TV Game 15 and while doing so he notes that if you unplug one of the controllers (you have to physically open the casing up to do that) the corresponding paddle disappears. "Great" I thought. Probably the controller is just unplugged inside the thing and all I have to do is plug it back in and we'll be ready to go. Nope. I took everything apart. Both controllers were plugged in. I noticed that when I switched them though, the number 1 controller did not work at all. The ingrates at Omocha Souko had sold me a Color TV Game 15 with a broken controller! D-oh!¨

Yup. I did everything I could think to do, even pulling the entire thing apart, but to no avail.

And I left it at that. For eight long months I had no functioning Nintendo Color TV Game 15 on which to play pong. All I could do was stare longingly at it, imagining the fun all the other families with functioning pong machines were having while I sat there, feeling empty.

Then a few days ago, as I reported only yesterday on here, I found another Color TV Game 15 at Omocha Souko for a cheap price! I bought it immediately, intent on scavenging one of the controllers from it.

I tested the second one out too and, very interestingly, found that it also seemed to have a broken controller as when I turned it on, the exact same thing happened. Only one pong paddle appeared on screen. Like the awesome genius that I am, I concluded:

¨I`m not too sure what the deal is but this can`t have been mere coincidence, they must have had some sort of defect in the controllers.¨

Anyway, long story short, I switched the controllers around and got one of the consoles working perfectly. My wife and I played it that night and had a great time. I was so happy.

Then last night we decided to play it again. I turned it on and was immediately devastated by what I saw on the screen:

NOOOOO!!!! The left controller broke after only one day`s use!! The left paddle was gone! Our lovely pong gaming career was at an end until I could find another of these hard-to-find 34 year old consoles in a junk bin somewhere!

I then collapsed in a heap of tears at my wife`s feet, curled up in the foetal position and started to suck my thumb.

My wife, however, kept her composure. She picked up the controller: 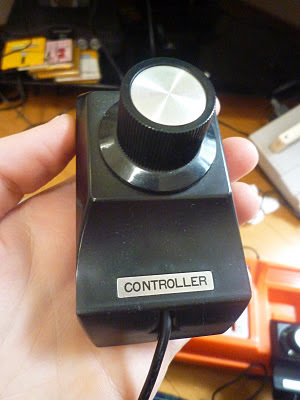 And within about 5 seconds she had miraculously fixed it! Both pong paddles were on the screen! And she didn`t even use any tools or anything!

I was absolutely shocked. Looking at her in amazement I asked: `How did you do that?`

Looking at me with an expression of incredulity and speaking in the same voice you would use to teach a three year old how to properly fill in a coloring book, she put two fingers on the controller like this: 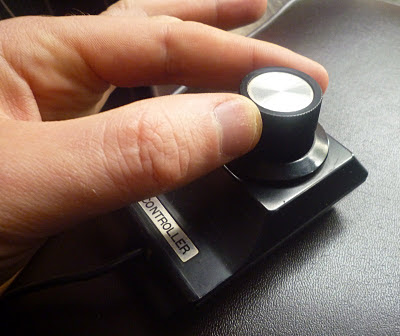 I nodded to indicate comprehension, mimicking a turning motion with my fingers.

My stupidity has never been so brilliantly exposed. Eight months of searching for a cheap junk console for parts. Several hours worth of work on taking apart two consoles and switching a bunch of wires. Hours of research on the internet. A trip to the hardware store to buy a new screwdriver.

When all I needed to do was turn the #@%*ing knob.

I am an idiot. 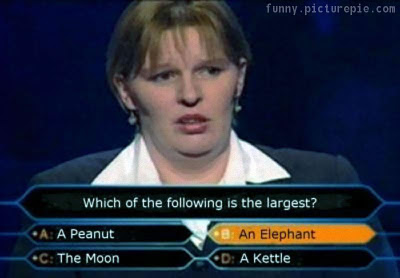 Even this person would probably have figured it out in less than eight months.

On the plus side, I am an idiot who actually owns two fully functional Color TV Game 15s instead of one as I had previously thought.

But an idiot nonetheless.

RELATED POSTS:
- Is it Possible to Stalk a Retro Game Store?
- A Gamer Exposed: The Ugly Truth About Retro Game Setups

Email ThisBlogThis!Share to TwitterShare to FacebookShare to Pinterest
Labels: http://www.blogger.com/img/blank.gifMy own stupidity