At the Kaiten Sushi Restaurant with a Turbo Twin Famicom 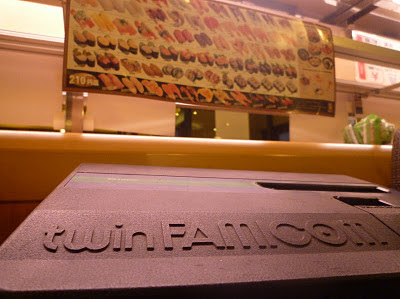 I found a cheap Turbo Twin Famicom at Omocha Souko today. As luck would have it the only reason I was at Omocha Souko today was that my wife and I were going to a local sushi place for dinner but arrived too early so we needed to kill a few minutes. The restaurant is right up the block from Omocha Souko so I suggested we spend a couple minutes browsing there.

Of course, when I found the Twin Fami they had just put out I had to have it, so we ended up lugging it to dinner with us. 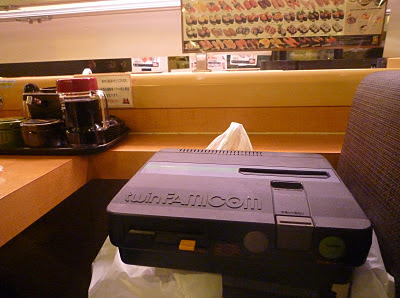 And I just decided to take a few photos of it there because....hey, its not every day that you have a Twin Famicom at a sushi restaurant so why not make the best of a good opportunity?

It is a pretty cool restaurant. You order stuff from these video screens at the table and your food comes on these bullet trains right to you: 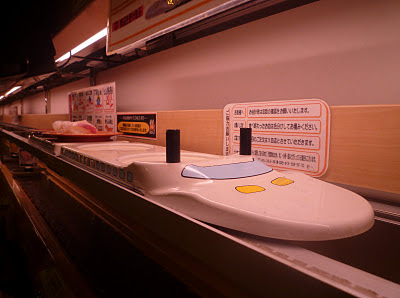 You aren`t actually allowed to take pictures in the place so I had to take these somewhat surreptitiously. Unfortunately that meant I couldn`t get many interesting angles or anything. I did make sure to get a shot with some sushi (actually beef) on the Twin Famicom though:
You don`t see that every day now do you? 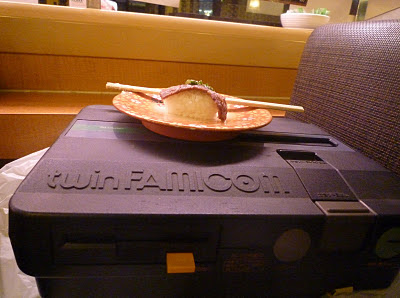