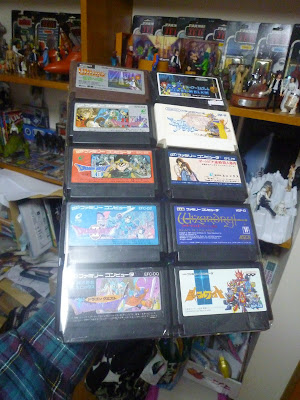 I found the above at Omocha Souko the other day. It is a big package of thirty Famicom carts wrapped in plastic that they were charging 2.000 yen for. That works out to only 66 yen (about 80 cents) per cart, which I thought was a pretty good deal.

Omocha Souko used to sell Famicom carts in bunches like this all the time, especially back during my first year of collecting. They were great, I got most of my carts that way back then. It is kind of fun because you can`t see what most of the carts are inside but you can kind of guess just by looking.

You might be thinking ¨yeah, but they`ll just put crappy sports games in the middle that you can`t see so those are probably a rip off.¨

Actually though I would sometimes find good games in the middle of these and they generally had a good mix, so even though you would sometimes get stuck with a bunch of baseballs and mahjong games you`d usually get at least something in them worth having.

They stopped doing that about two years ago, so I was really glad when I saw this. This one had ten carts visible on the top, but the other twenty were more or less a mystery. I was a bit reluctant at first because the ten you could see were pretty much all RPGs, which aren`t my thing. Dragon Quest, Final Fantasy, Fire Emblem, Wizardry....blah. 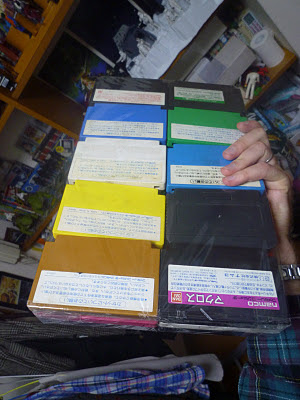 Looking at the back though I could at least make out that it also had Macross. That isn`t necessarily a great game (its not a bad one either), but at least it gave me some assurance that the other twenty weren`t all RPGs too.

So for that cheap price I decided to just go for it and bought the thing. I decided to photograph the grand opening specifically for the purposes of this blog post. Lets see what I got, shall we?

Step 1 - cut open the plastic wrap with my teeny Swiss Army Knife scissors that I usually use to cut my toenails with (too much info?): 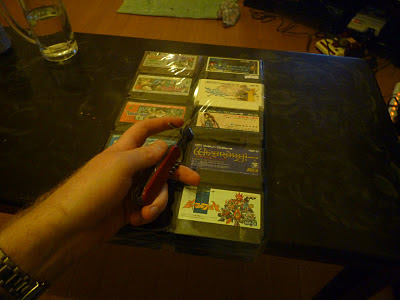 After removing the top layer of carts here is what lay beneath: 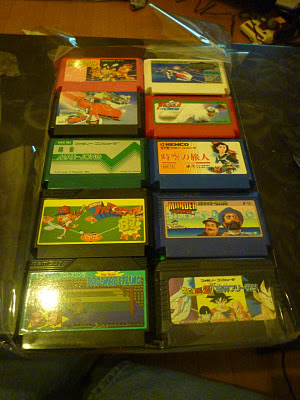 Its a bit of a disappointment. Seicross is a great game and Road Fighter isn`t too bad, but the rest is....pretty mediocre. Two baseball games, a Mahjong game, Murder on the Mississipi, two wrestling games and some Dragon Ball game. Rats.

Lets see what the bottom layer has: 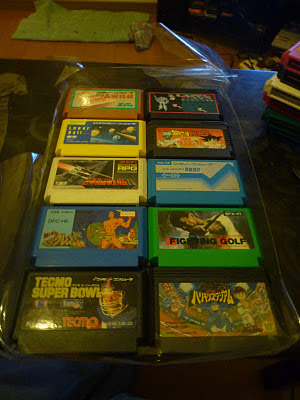 A bit better. Donkey Kong Jr Math is, believe it or not, actually a pretty good find. Its not the most entertaining of games (an understatement, I know), but its actually one of the harder pulse line carts to find so it is a bit of a `get`. Macross, Lunar Ball and Tecmo Super Bowl aren`t bad either. Hara Kiri Stadium I now have 400 copies of, or maybe it just seems that way. The only thing about Fighting Golf I like is that the cart is a pleasing shade of green. Hercules, some Shogi game and that vertical shoot em up with the title written in difficult kanji that I can`t read round off this layer.