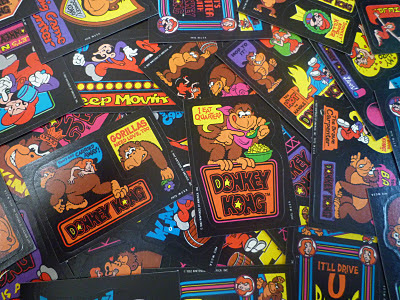 I kind of like ephemera - the things that society produces which are intended to be used and discarded rather than preserved. Stickers fall neatly into that category.

I was browsing Ebay a few weeks back and found a listing for a complete set of 1982 topps Donkey Kong stickers for 6$. That was cheap enough for me to take a chance that they would be at least interesting enough to do a blog post about. They arrived a few days ago and I decided that they were, in fact, blog post worthy.

I was really into stickers back in the early 80s. My parents gave me an old album and I would stick any stickers I got into it. I fished that old album out of their basement a couple years ago and sat down for a look at it. It was the first time I had done so in about twenty years. There were a lot of Star Wars stickers, some hockey stickers, Gremlins stickers, Jackson 5 stickers and a whole bunch of other random ones, including one from the dentist reminding me to floss. Great stuff. 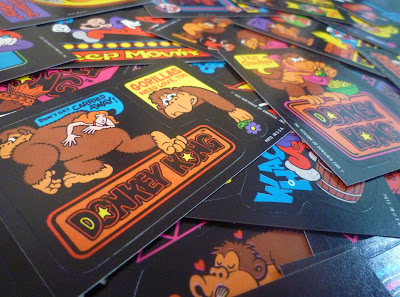 I never had any of these Donkey Kong stickers, but they do look a lot like the type of stickers that I remember collecting in the early 80s. Almost all of them have some sort of catch phrase, like “I`m Ape over Donkey Kong“ or “Donkey Kong is Better than Homework“. They don`t really display any wit to them, though they embody that safe display of mild attitude that I remember finding very amusing and comforting as a kid.

These all have black backgrounds, which gives the set a very distinctive look. I think it works quite well as it mimics the black background of the game itself. You can arrange the backs of the cards to make two puzzles, one a scene of Donkey Kong throwing flaming barrels at Mario: 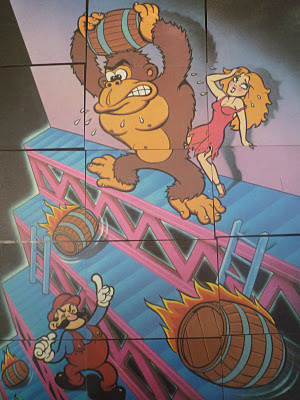 And the other a scene of the title character playing the game from inside the screen, which I think I like the best of the two: 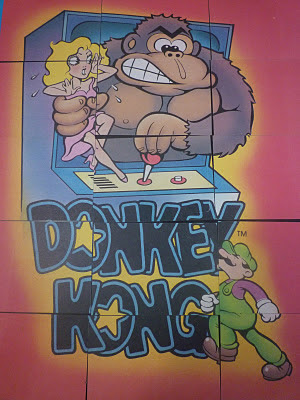 They look pretty good side by side like this: 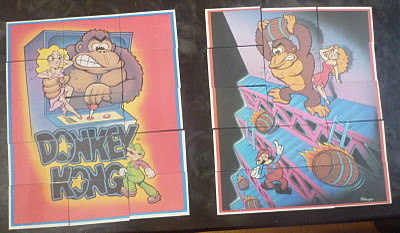 Another intersting thing about these is how they portray Mario. He is referred to by his pre-Mario name as Jump Man and looks almost nothing like the way he would eventually be portrayed in artwork after Super Mario Bros. made him a star: 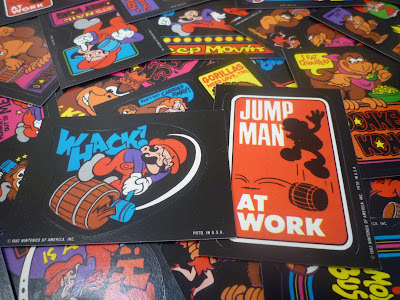 I`d really like to put some of these stickers on things, but the collector in me refrains from doing so as if I did, I would no longer have the complete set. I really hate my collector side sometimes. I might spend another 6$ to get a second set that I can just mess around with.