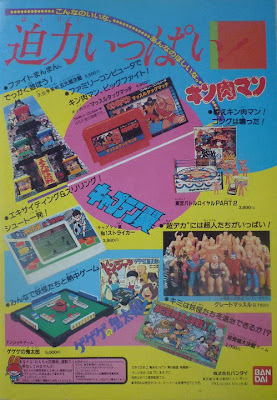 One thing that I really love are retro game and toy advertisements. They are the sort of thing that really invoke that feeling of nostalgia, perhaps even more so than the actual games and toys themselves. These are the things we used to peruse with longing eyes as children. One of the first things I do when I find an old comic book from the 70s or 80s is to look at the old toy ads.

Famicom Freak over at Retro Gaming Life has put up a lot of posts with old North American game ads, mostly for the NES or Gameboy, that are quite fun to look through. In addition to the nostalgia factor, the ads also often possess creative qualities that are just as good as, if not better than, the art on the game boxes themselves.

As for the Famicom, Disk-Kun has put up an amazing selection of handbills for a lot of Famicom games, which are great fun to browse through. And Youtube of course has a ton of great TV commercials for the Famicom, this video collection here is probably the best. Great fun.

I've been trying to find some of these by scouring used book stores for magazines and comics from the 80s that might have them. Yesterday I was at Mandarake when I found these two publications for 100 yen each: 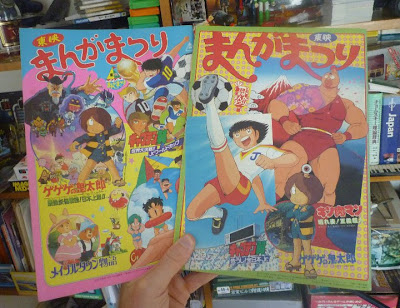 These are titled "Manga Matsuri" and are basically illustrated pamphlets for animated films that were released in 1985 and 1986 respectively. According to the Famicomblog resident expert on 80s Japanese kid's culture (ie my wife) the studios would promote these films every summer by giving free tickets to kids that were only valid if accompanied by an adult (who would of course have to buy a ticket). As most of them were geared towards boys, however, our resident expert didn't go to them.

Anyway, the main reason I picked these up was because on the backs of each are ads for Famicom games based on characters in these animated films. The back of the 1985 one has an ad for the Famicom Kinnikuman game: 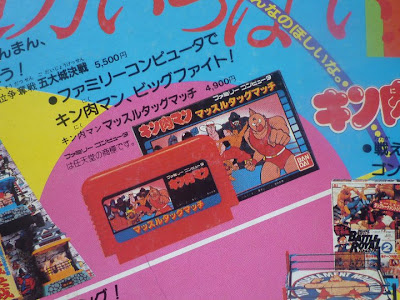 As I've noted before, I really like the cart for this Kinnikuman game, even though as a game it leaves a lot to be desired. I like this ad a lot too, it is very colorful. They released quite a few toy tie-ins as well, such as the Kinnikuman Battle Royale ring: 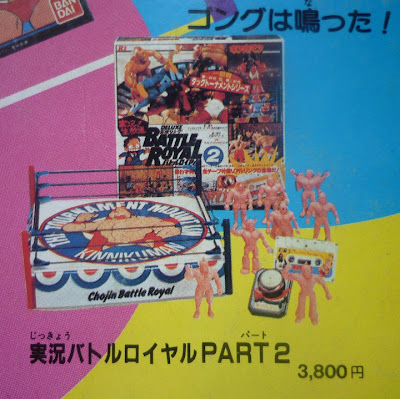 They actually have one of these for sale at Mandarake now. It costs significantly more than the 3,800 yen it went for back in 1985. Because it is so awesome. It even has a cassette tape. That is how awesome it is.

This also features an ad for a Captain Tsubasa handheld which looks really cool: 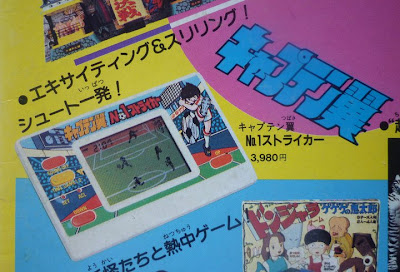 Bandai released quite a few handhelds like this based on characters which also appear on Famicom games. They are quite collectible these days, though I'm still partial to the Nintendo Game and Watches.

There is also an ad for a GeGeGe no Kitaro board game: 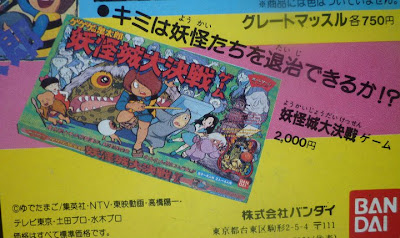 Which looks kind of neat and acts as a nice lead in to the ad on the back of the 1986 Manga Matsuri, which features the Famicom game GeGeGe no Kitaro: 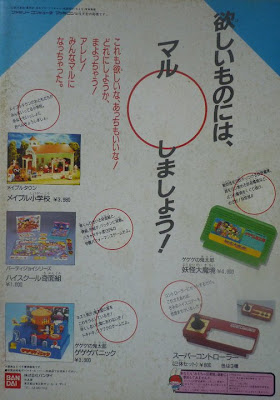 What I particularly like about this ad is that the vertical writing in big letters says "Lets put a circle around the items you want!"

You'll notice that the advertisers have already gone ahead and put a circle next to every item on the page. Very helpful of them.

Anyway, GeGeGe no Kitaro cost 4,800 yen back in the day. Today you can pick a copy up for about 300 at most stores, but it is a pretty good game: 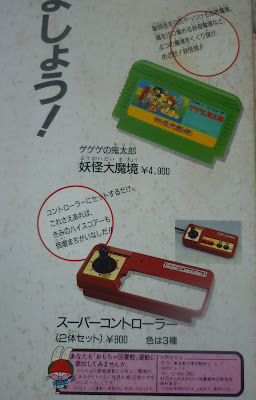 The controller add-on is a much more interesting part of this ad. I've never seen one of these before. It is called the "Super Controller", which unfortunately makes it an exceptionally difficult thing to do a Google search for due to the fact that any search with the terms "Famicom" and "Super" in it will just get you a bunch of Super Famicom links. The only thing I could find in an image search was this French site which has a picture of it but not much more. At 800 yen for a set of two, it might not have been a bad deal though.

Anyway, there you have it. Some Famicom ads from the past. Hopefully my travels will turn up more of these in the future!

Related Posts:
-M.U.S.C.L.E. Men and the Famicom: Kinnikuman Muscle Tag Match
- Sqooner or Later You Should Give Sqoon a Try