I Nearly Died Getting a Red Twin Famicom Today. 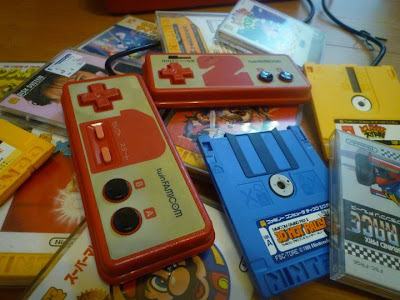 Today I finally broke down and bought a complete, working Twin Famicom. I was at Omocha Souko and they had one for 8,000 yen (about 100$). That is a lot of money considering I bought my three other Twin Famicoms for between 100 and 300 yen apiece there. But they didn't come with the all-important power cable, so I've had them just collecting dust, not even sure if they work, for quite some time now. This one came with the cable. Get!

Anyway, I actually almost died on the way home with my purchase. It was raining heavily today and as I rode my bike down a hill I went over a metal grating that, it turns out, becomes extremely slippery when wet. I was going quite fast, probably 30-35 kmph, when suddenly my bike just completely fell down right underneath me. This sent me flying across the pavement at an alarming rate, screaming "Oooooooohhhhh shitttttttttttt" as I did so. I came within a couple of feet of getting run over by a passing car, but luckily we avoided each other (or more accurately they avoided me, I had no control over my body's motion at that point).

My knees and the palms of my hands were a ghastly site and my pants now had a couple of new holes in them, but nothing was broken (except my bike), so I was pretty relieved.

After confirming that I was in one piece I then remembered: My Twin Famicom!! Shit!

By an incredible stroke of luck, I had put it into my backpack, which was on my back during the accident. 9 times out of 10 I would have put it into my bicycle's basket. If I had done so, it would have gone flying and been smashed for sure. A two litre bottle of water I had in there came skidding to a halt a good thirty metres up the road.

Anyway, to take this post back to the subject of my Twin Famicom, the long and the short of it is that after arriving at home (after a quick stop at the drug store for some bandages and disinfectant) I took it out of my backpack. Nothing obviously wrong with it. It is the red one. I agree with Bryan that this is the best version of the Twin Famicom. A thing of absolute beauty: 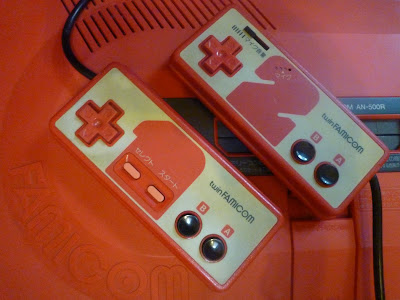 As a way of building up the suspense, I tested the Famicom cartridge part first. I stuck a copy of Bomberman in there and it worked the first time. That was a good sign. But the real test was going to be that Disk Drive.

I've accumulated quite the collection of Disks from junk bins here and there. I dumped them out on the floor next to it:

And one by one started testing them. The first time, things looked promising. I have two broken FDSs and I know what ones with a broken drive belt sound like. "GRRRRRRRR" is what the sound like. A very annoying sound. This one, thankfully, did not make that sound. It made a lot of different sounds, which indicated to me that it knew what it was doing and would make my game work momentarily.

Only it didn't. Each time I tried, I just kept getting an Error 27 message. Crap. Again and again I tried, but nothing. 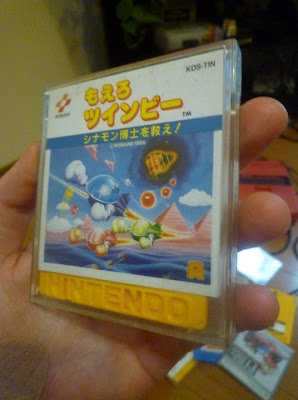 Moero Twin Bee. I put that disk in there and steadied myself for the disappointment of seeing another error message. Only it didn't. For the first time in my entire life I laid eyes on the sight of a Famicom Disk System displaying something other than an error message: the actual game itself appeared on the screen: 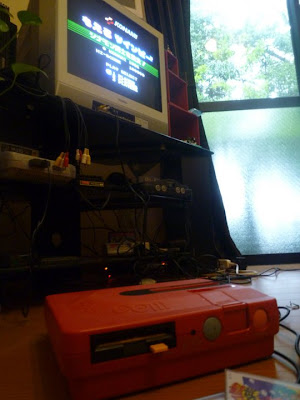 Sorry about that profanity, but fuck yeah. That was sweet. I could actually play an FDS game! My Twin Famicom works!! Yes!

The bad part is that it seems my entire collection of Famicom Disk System Disks except for Moero Twin Bee do not work: 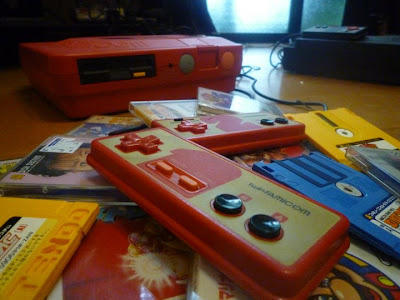 So much for my plans to spend the rest of the day playing Super Mario Bros. 2.

The other bad news is that, with the arrival of my first Twin Famicom AC adapter, I could finally test my other 3 Twin Famicoms.

All three of them load Famicom carts just fine. And the disk drives on all three are completely broken. Error messages and that "GRRRRRRR" sound galore.
Posted by Sean at 3:52 PM