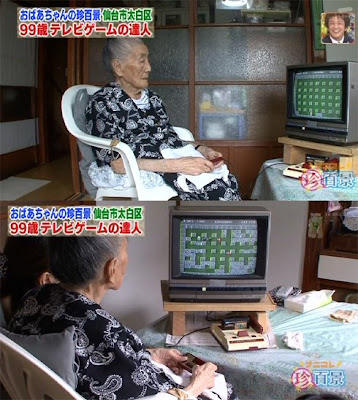 I was sipping my morning coffee and perusing the news on the internet (as is my want) when I did a spit-take at a piece on Japan Probe.

Asahi TV has this good show, Nani Kore, that airs on Wednesdays. They go around Japan looking for unusual sights, each of which they air a 2 or 3 minute clip about. After that a panel of talents votes on it and, if they are unanimous, it gets registered into a sort of hall of unusual things fame.

My wife and I watch this quite a bit, it is one of the few Japanese TV shows out there that doesn't completely suck. We missed seeing it this week. And of course, this week they had something really cool - a 99 year old woman who plays Famicom every day.

You can watch the 3 minute clip here. It is in Japanese but you can probably get the gist of it just by watching.

She plays everyday, but only one game: Bomberman. When asked, she says she has been playing for 30 years, though as the narrator points out Bomberman was first released 26 years ago so she has probably been playing it for that long.

If you watch the clip, you'll notice that she is incredibly good at Bomberman. She sometimes clears all of the levels twice in a single day, taking about two and a half hours each time.

The best part of the video is definitely where she blows on the cart before putting it in the Famicom.

Honorable mention goes to the TV she's got the Famicom hooked up to. Very age appropriate.

I wonder how many of us will still be playing Famicom when we are that age?