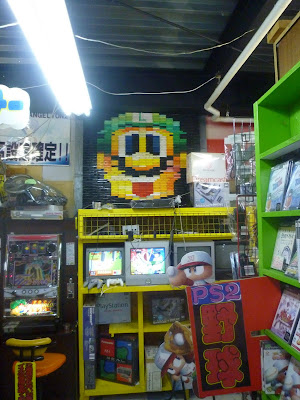 Notice anything interesting in the above photo?

Well, OK, there is probably a lot of interesting stuff in the above photo, so let me narrow it down for you. Take a close look at that picture of Luigi's face on the wall there. Know what that is made of?

You guessed it, Famicom carts: 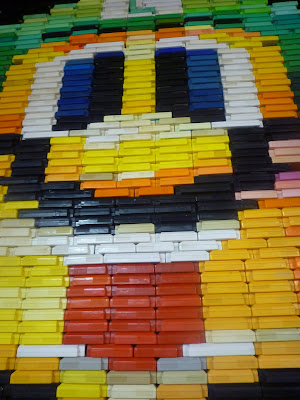 I found this creation at the "other" Omocha Souko store that I sometimes visit, which is about a 30-40 minute bike ride from my place.

Somehow I have managed to visit that store at least 3 or 4 times without having ever noticed this awesome thing before. I suspect that on my previous visits it was probably hidden behind some merchandise as the space in front of it is used as a shelf. They must have sold something since the last time I visited and voila, Luigi has been revealed.

This thing is great. It reminds me a bit of that Akihabara Famicom chair that has become a shrine that all Famicom collectors must make at least one pilgrimage to during their lifetime. I haven't been to that one yet, but it really pleases me to be able to share the Luigi Mosaic out here as western Japan's own Famicom collector shrine.

In contrast to the Akihabara Famicom chair, I don't think anybody's ever taken notice of the Luigi Mosaic. I'm not even sure that most of the staff at the store are even aware of its existence. I think it is absolutely fantastic though. 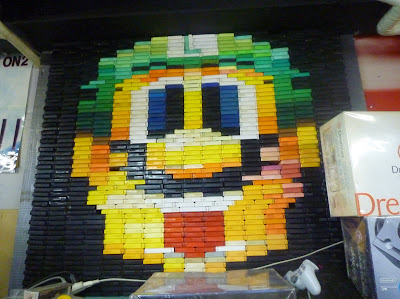 A rough estimate arrived at by measuring its dimensions suggests that it took more than 1,000 Famicom carts to make it. I particularly like the way they used the oversized white carts to make the "L" in Luigi's hat.

So anyway, add the "Luigi Mosaic" onto your list of must-see Famicom stuff. Or don't, most people don't maintain such lists after all. And this store is really inconveniently located. Heck, just look at the pictures I put up here and that'll probably be good enough.
Posted by Sean at 1:36 PM