A Whole Lot of Baseball Games 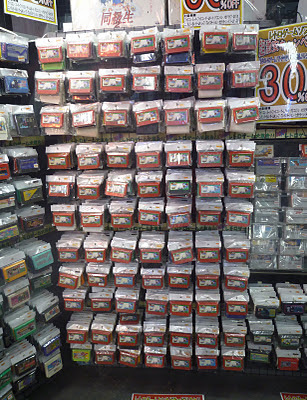 A few days ago when I walked into Omocha Souko I found that somebody had re-arranged the Famicom carts in one section of their rack so that the cart facing out on each peg was Jaleco`s Moero Pro Yakyu baseball game.

I thought that was kind of amusing and made for an interesting photo opportunity. It isn`t often that you see so many copies of the same game in one place. 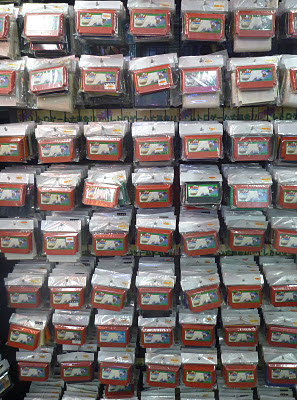 Moero Pro Yakyu (released as Bases Loaded on the NES) has got to be the most common Famicom game out there. They are just everywhere. The first Family Stadium is about the only other game I can think of that is anywhere near as easy to find.

This fact acts as sort of a double edged tribute. On the one hand it indicates just how popular this game was back in 1987. They must have sold millions of copies of it for there to be this many still in existence 25 years later. Interestingly Family Stadium, the other most common Famicom cart, was also released in 1987, so that was quite a good year for Famicom baseball games.

On the other hand though it also indicates how poorly that popularity has held up over time. As with most sports games, I don`t think anybody has ever walked into a store specifically looking to buy a copy of Moero Pro Yakyu in years.

This also provides a little way of demonstrating how silly the pricing of games at Omocha Souko is. These are all the same game in basically the same condition, but the prices are all over the place. This one is selling for 100 yen (about $1.25), which is the cheapest price they normally put on any games (and it will be a hard sell even at that): 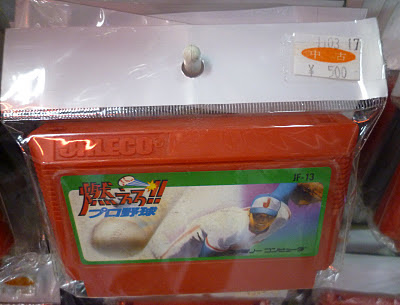 The others all fit in somewhere between those two prices.

Anyway, I just thought that was interesting.

Related Posts
-Is it Possible to Stalk a Retro Game Store?
-Anatomy of a Japanese Video Game Store`s Retro Section