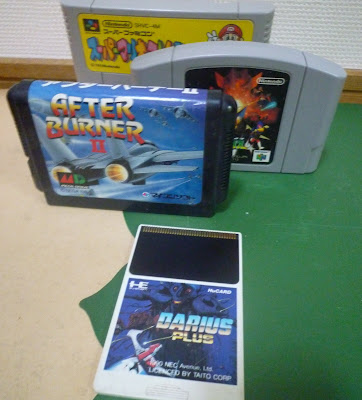 As I've said before on here, I think Famicom carts are the most attractive video game carts ever made.

Carts on post-Famicom consoles, however, have been kind of hit and miss. I thought I'd use this post to look at a few post-Famicom cart designs.

Lets start off with the Famicom's successor here: 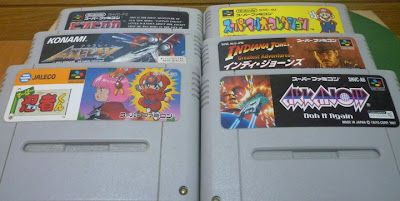 They then left the plans on someone's desk, quietly slipped out and were never seen again. Nintendo, unaware of these shenanigans, went with that design.

This is the only theory that can account for the awfulness of the Super Famicom cart, both from a functional and an artistic point of view.

On the artistic side, the carts are ugly. Their greyness is overwhelming. Why is the label so small? Why did they put that grooved recess in the front of the cart? Just to give them an excuse not to make the label bigger?

Damn you, mischievous vandals from 1989!!

Nintendo followed that up with these: 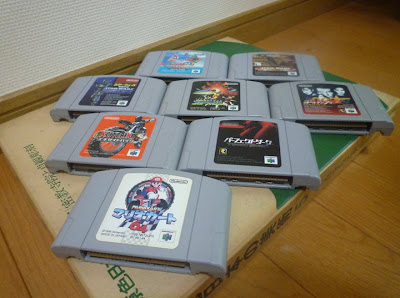 Artistically, the fact that the label takes up more of the front of the cart is a plus, but these aren't really that different from the Super Famicom carts other than that. The grey is still overwhelming and the label is still too small for my taste.

Meanwhile, away from Nintendo Headquarters, the folks over at NEC (who employ a night guard to keep the vandals out) got things right: 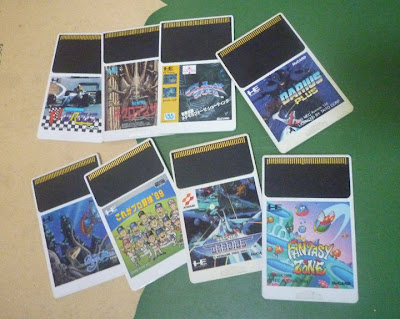 I love PC Engine HuCards. These things are awesome. They are far and away the smallest Video Game carts or cards in my collection, at least for non-handheld consoles. All the HuCards in my collection (I have nine) take up less space than a single Super Famicom cart.

Sega, not to be outdone, also got things right: 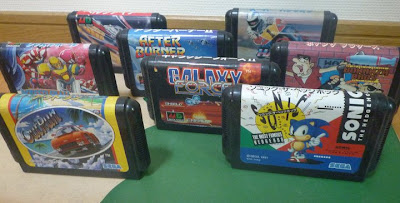 I really like Mega Drive carts. They are very similar in design to the Konami carts on Famicom games like Gradius. They have colorful labels that take up almost the entire cart, which is great. And they wrap them over the top edge so you can see which game is which when they are stacked up. Perfect.

Related Posts:
-The Aesthetics of the Famicom Cart