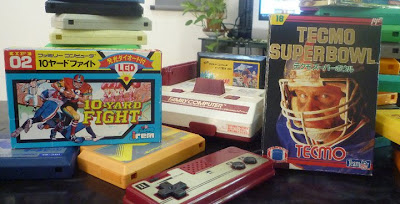 What better time than the middle of baseball season to dedicate a post to the two best Football games on the Famicom?

10 Yard Fight and Tecmo Super Bowl are probably the two best American football games for the Famicom (and the NES for that matter). I never played 10 Yard Fight back in the day, but I do remember playing Tecmo Super Bowl a lot with friends back in high school. It was the only game that had the actual teams and actual players from the NFL.

I always got my ass kicked at it because I sucked at strategy and I was always playing it at my friend Mike's house. He owned the game and I didn't, so he probably practiced a lot on his own. Wasn't that always the worst thing about playing Nintendo games back in the day? Facing someone who owned a game that you didn't. So unfair.

Anyway. In turns of game play, I would say that Super Tecmo Bowl has aged much better, though both are fun. In terms of Famicom box art though? 10 Yard Fight dominates the gridiron on that count. God, what an awful use of the word "gridiron", I do apologize.

Take a look at that box though: 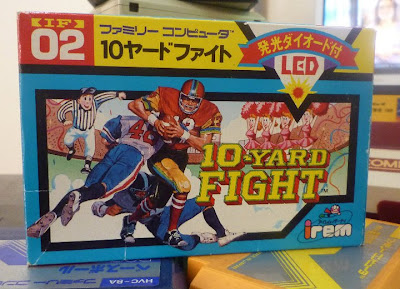 This is a really great box. Colorful, action packed, beautiful. The art itself is done in a kind of retro 50s way, with the cheerleaders and ref looking like old-school cartoon characters. The players are more realistically done in a heroic looking action scene. The game title is great too, in bold yellow and red characters.

All of these early Famicom Irem games, like Sqoon and Spelunker, have similar box designs. They kind of mimic the look of the cart with the LED light in roughly the same position on the box as it is on the cart.

The back of the box is pretty cool too, basically just continuing the design on the front: 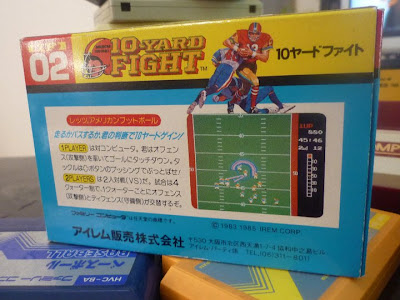 One peculiarity of these is that the plastic insert which holds the cart is orange rather than the standard clear plastic most Famicom games used: 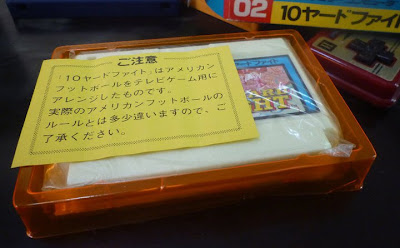 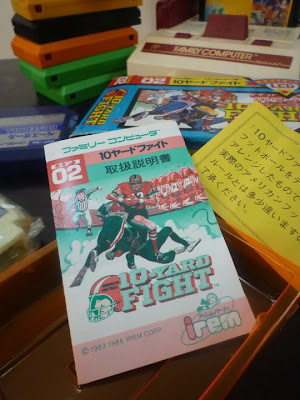 Super Tecmo Bowl, on the other hand, doesn't have anywhere near as inspiring a box. Its a great game, but look at this dud: 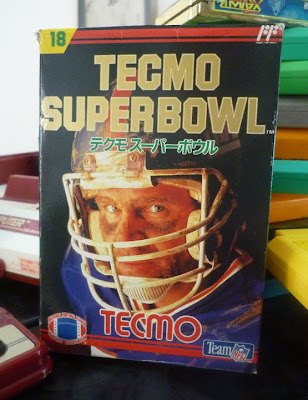 No color. No action. Just some dirty guy looking at you through his helmet.

Who else played for the Giants in the early 90s? Jeff Hostetler? No.....anybody know who this guy is?

Anyway, the back of the box is also pretty boring: 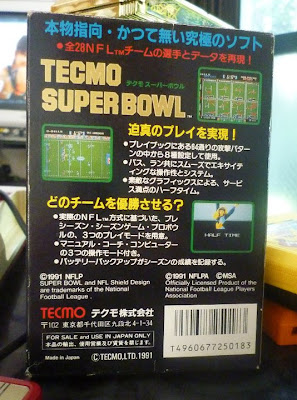 And the manual....oh crap its that guy again: 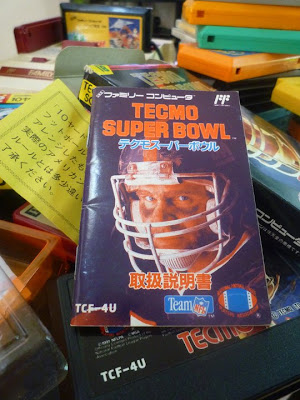 What is his name? Argh.