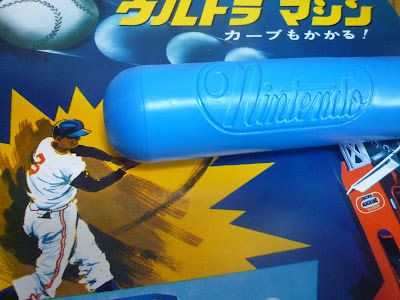 As I have stated on here numerous times, I like to go to a store called Omocha Souko on a regular basis in order to hunt for retro video games. I go so frequently that I now have an awkward time answering the question "what is your hobby?" If I were to answer honestly I would say "I go to a store called Omocha Souko 3 or 4 times a week to look through their junk bins for old video game stuff that I collect and then write about on my blog. That is my hobby."

As this answer provides too much detail on too obscure an area of interest, I usually just say "hiking" instead.

At any rate, what I don't write about too much on here is the fact that Omocha Souko is not just a video game store, it is also a big used-stuff store. The name "Omocha Souko" actually means "toy warehouse" in Japanese. About half of the first floor is, in fact, taken up by toys. 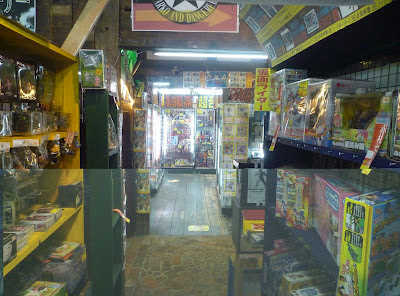 Usually I bypass this area and head straight to the second floor for the video games, but on occasion I will browse the toy section before heading up there. Yesterday I did just that and it was a good thing I did, for on one shelf they had just put this baby out: 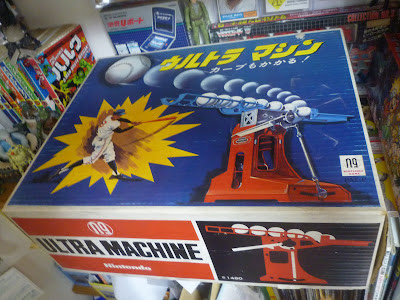 This thing is so awesome I don't know where to begin. Until about a year ago information on old Nintendo toys like this was hard to come by, but now thanks to Erik's excellent Before Mario blog the entire world now has a wonderful archive of information about these things which I will now blatantly rip off by quoting a few facts that he put up there.

Released in 1967 this toy was designed by none other than the late Gunpei Yokoi, perhaps better known to video game history as the creator of the Game and Watch and Game Boys!

OK, enough of the ripping off (but do check out Before Mario if you haven't already, its really a great blog). Lets look at what I got.

Opening up the box the first thing we have is: 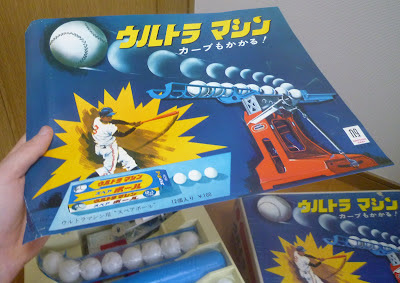 A totally awesome Ultra Machine flyer! The reverse of this has the instructions on how to set up the machine. Note in the lower left corner there is an ad for replacement balls (100 yen per box). This is actually quite cool though and probably worth what I paid for the thing (2000 yen) itself. I might frame it someday as a piece of pop art.

Under that we have: 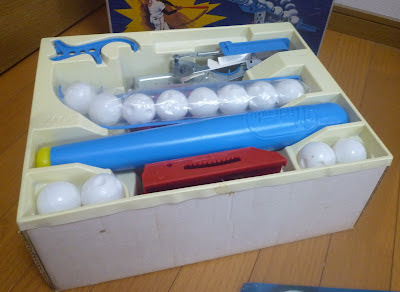 YES! Everything is complete!! Even the balls are all still there!

This made me quite excited as about a year ago I actually purchased another later version of this same toy that was released in the late 1970s: 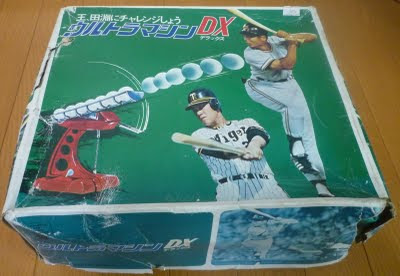 The Ultra Machine DX. It is very similar to the original Ultra Machine, but as you can see from this photo the box on it was almost destroyed. It was also missing the balls and had a crack on the blue plastic part. It was only 800 yen though so I was quite satisfied with it at the time.

My new Ultra Machine though is not only complete but in pristine condition. 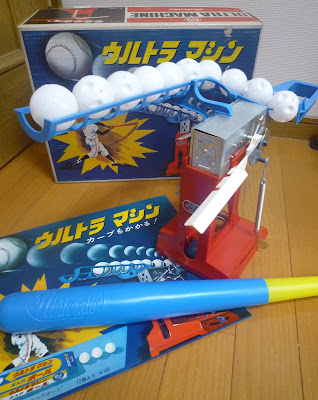 I love that blue Nintendo bat:

The bat that came with the later Ultra Machine DX is gray, nowhere near as sexy.

The box is pretty cool too: 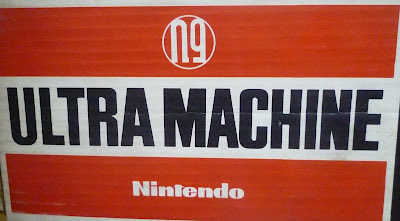 Anyway, I just love this thing. It was quite the bargain too for only 2000 yen. An Ebay search just turned up one with a BIN price of 300$. That is on the high side, but still, what a bargain.