Fukuoka Famicom Shops II: The Decline and Fall of the Famicom Empire 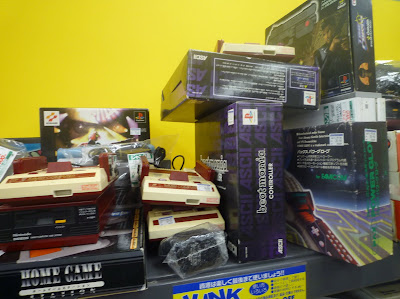 This morning I had a bit of free time and was able to go around to a few more Fukuoka Famicom shops. The three shops I visited today all had one thing in common: their Famicom sections are in horrible states of neglect. In my last post I highlighted the beauty of a Famicom section that is well managed, at 007. This post deals with shops that have gone the other way: decline.

The first shop I took in was Hard Off. This is the store I bought my square button Famicom at back in May.

I have to say that I hate going to that Hard Off and today was probably the last time I'll make the trip. Its about a 40 minute bike ride from my place through some of the most unattractive urban and industrial sprawl imaginable. And when you arrive you are greeted by the soul-crushing expanse of asphalt that surrounds it: 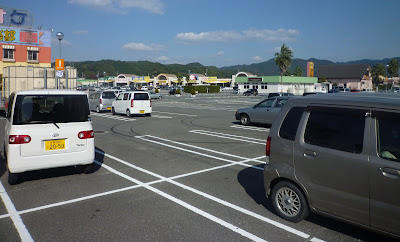 The shop is that building with the arched roof barely visible in the distance.

Anyway, I've been willing to put up with the brutal ugliness and inconvenience of the place in the past because I've found a few good deals in the massive junk section in the back of the shop. They've got blue bins on shelves stuffed with games for all sorts of systems: 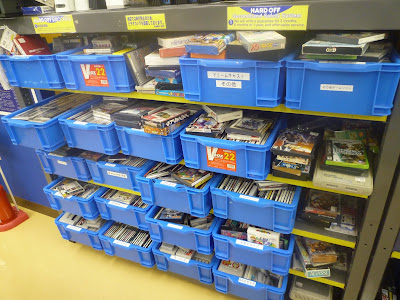 This one (on another shelf) had the Famicom games: 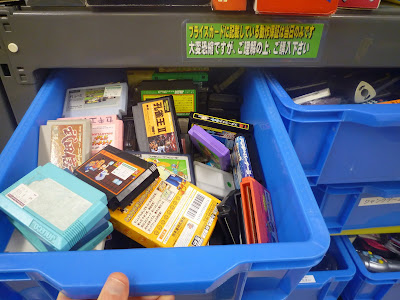 Next to the software: the hardware. A few decent looking Famicom consoles for 525 yen each sit casually awaiting purchase among the Famiclones and PlayStation peripherals: 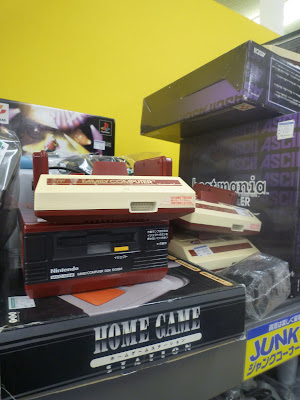 Much more numerous piles of Super Famicoms, GameCubes, PSs and N64s line the shelf below them: 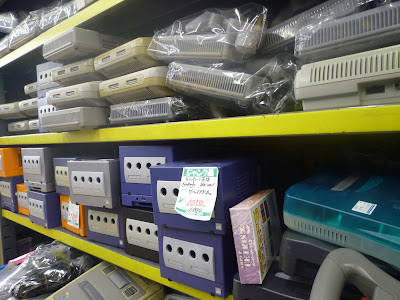 And a Power Glove sits nearby with a price tag of 2650 yen: 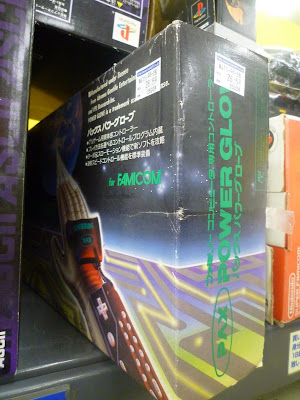 I really wanted a Power Glove when they first came out and I saw "The Wizard". I found one a few months ago for 100 yen at another shop but decided against it. The rubber part looked like it had not aged well and the whole set up looked like it would be way more trouble than it was worth for a device whose only useful purpose was to make the antagonist in an 80s pre-teen movie look like more of an ass hole than he would have with a standard NES controller.

I was pretty pissed off to discover that the hypothetical clerk that I refer to as "employee 3" had been doing all the pricing recently and everything they had gotten in since my last visit a few months ago was ridiculously overpriced (except the Famicom consoles, which at 525 yen were quite reasonable). Like they had a crapload of not-in-demand-at-all Mega Drive games (baseball, racing, Tennis, etc) for 525 yen each. This is about double what those games go for in the good sections of most game shops. Yet here we are at Hard Off in the JUNK section (ie where everything is supposed to be cheap because they don't check it) and they are asking these prices. Can you feel the indignation? I'm putting it out there pretty strong.

They also had this beauty priced for 1050 yen: 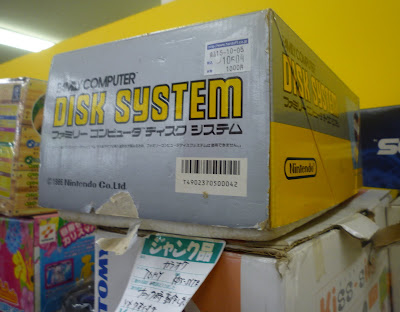 You might think "Hey, 1050 yen for a boxed Disk system, that isn't a bad deal, even if it hasn't been checked."

And you would be right of course. If there was a Disk System in that box, which there wasn't. Picking it up I found it to be suspiciously light and on opening it realized that it only had the cable that connects the Disk System to the Famicom (about a 300 yen item at most shops).

Anyway, I apologize for the rant about prices, I realize that it doesn't make for good reading. I just bring all this up to make a point. I don't mind paying more for games on occasion if doing so means supporting a nice, independently run game shop that puts some effort into it. Like 007, which I make a point of buying games at even though I can sometimes find them cheaper elsewhere. I realize that fun shops like that won't exist without people buying stuff from them so I make a point to do so.

But brutally ugly stores that exist in the middle of brutally ugly suburban sprawl and which unceremoniously throw their games into ugly plastic bins on soul-less metal shelves completely bereft of any decor or pomp? Screw that. If I'm going to shop at a place like that I expect things to be dirt cheap, not MORE expensive than the nice little shops. Its the equivalent of going to a McDonald's and finding everything on the menu costs more than the restaurant downtown that has 3 Michelin stars.

So don't go to Hard Off is all I'm saying.

Anyway, after that I pedaled back into town and went to my next stop: Omocha Souko.

If you've been following this blog, you might be surprised that I include Omocha Souko in a post dealing with shops with neglected Famicom sections. It is where I have had some of the most amazing shopping experiences ever, finding amazing deal after amazing deal on Famicom and other retro game stuff (see here and here for example).

And it is true, it remains an amazing shop. From its flashy, welcoming entrance: 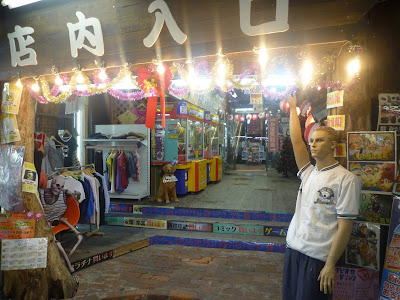 To the aisle upon aisle of video game awesome-ness: 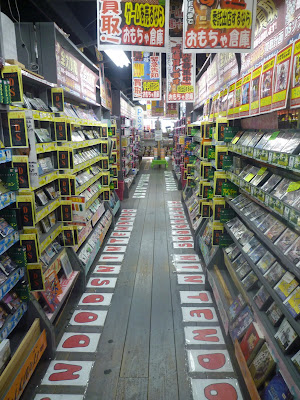 To the stacks of retro consoles lining the wall: 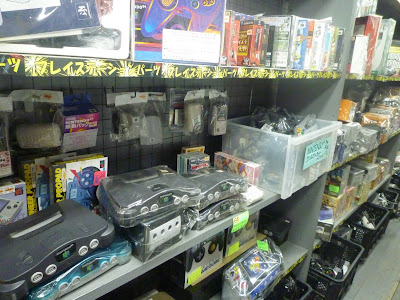 To the ultimate shrine to Famicom beauty: the consoles that are so pristine that they can only be displayed behind a protective layer of glass: 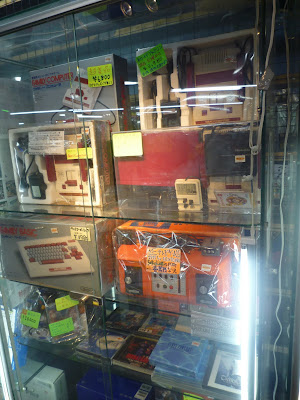 It really is a great store and I love it so.

BUT having said that, I have to further say that all the great bargains they have held over the past year have taken a dreadful toll on their Famicom game section.

When I first visited Omocha Souko about 2 years ago they had the biggest Famicom game section in all of Fukuoka. They must have had close to five or six thousand carts back then. And they didn't just have huge numbers of baseball and Mahjong, their selection had depth too. All of them were lovingly packaged individually and adorned with the cute handwritten signs like the ones that I noted at 007 in my last post. In the early days of my collection (at a time when I didn't think of it as a collection) my wife and I would drop by there on the way home sometimes and just spend our time rummaging through the massive numbers of games looking for ones that looked good. It was great fun. Buying a 300 yen Famicom game was actually cheaper than renting a DVD and could provide roughly the same amount of entertainment, so it was a cool way to spend an evening.

All of that is pretty much gone now though. For some reason they decided they wanted to dramatically shrink the size of their Famicom game section and thus they have had numerous blow-out sales over the past year that has seen probably about 90% of their Famicom games go (many to me). So its kind of a pathetic sight to see now: 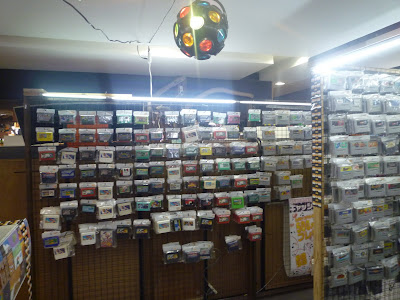 Yup, that is it. That one rack is all that remains of Omocha Souko's once mighty selection of Famicom games.

It is such a shame. I mean, look at that awesome strobelight. Isn't that exactly what a Famicom game section needs? And there it is, they've got one! And they play this funky techno music that really facilitates one's desire to shop. But they have nothing left to buy! I mean, look at a close up of the selection here: 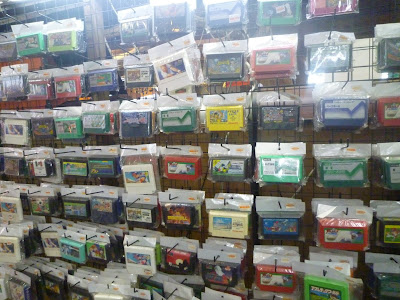 Basically all they've got left is a few hundred copies of Baseball and Majhong games that nobody wants to buy (and a few Mega Drive carts accidentally squeezed in there). The handwritten signs are all gone too. Its such a pitiful sight. I wish I had photographed the place as it was when I first went, it was so awesome. You'll just have to take my word for it.

Anyway, just to round out this post I stopped by another store in decline: GEO. GEO is actually a huge chain DVD rental store, but they also have (or had) large retro-game sections in most of their stores. As I noted in a post a few months ago though, GEO is getting out of the retro game business entirely, at least at their seven locations in Fukuoka. They started by putting their entire stock at half price about 8 or 9 months ago. Then they gradually reduced the price further and further until a couple months ago when they marked all their Famicom, Super Famicom, N64 and Game Boy games down to 50 yen each: 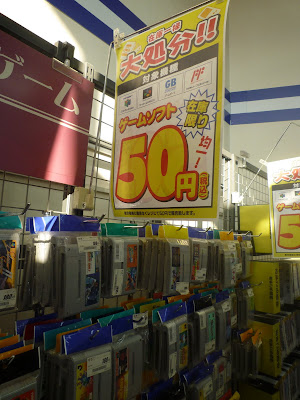 Of course by the time they brought the prices down that far everything had been heavily picked over. 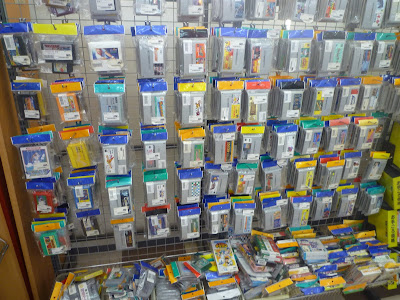 What were once several rows of retro game awesomeness has been reduced to the above selection of Majhong and Pachinko games. This is pretty much the same at every GEO location in Fukuoka. I got some good deals at earlier parts of the sale, but still I felt kind of bad to see that they were getting out of the business.

Anyway to end this post on a high note, GEO did have one boxed Super Famicom game that I thought looked so awesome that I had to photograph it: 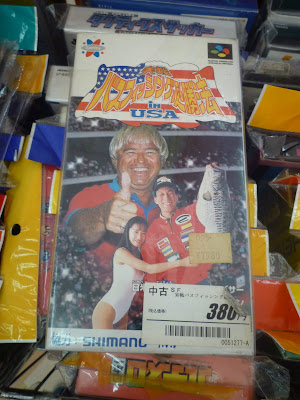 Bass fishing in the US. Looks like a shitty game, but wow, what an awesome cover. So much wrong with it but it just seems so right. The haircut on the guy giving the thumbs up. The scantily clad race queen hugging the guy holding up the bass, who for some reason is dressed like a race car driver and not a bass fisherman. I mean, did people actually buy this back in the day? Or was this game specifically created to be marketed at future generations of hipsters looking to make ironic gag purchases? Either way, I like.
Posted by Sean at 4:23 PM