Fukuoka Famicom Shops IV: Flea Markets Brought to You by the God of War 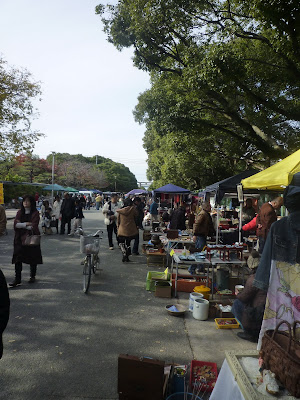 I suppose a flea market technically isn't a shop, but whatever. I make the rules around here. You can buy Famicom games there so it qualifies for the purposes of my Fukuoka Famicom shop series.

My wife and I were cycling in to town yesterday afternoon when we passed by Hakozaki Shrine, dedicated to Hachiman, the Japanese god of war. Sounds like a good name for a video game, actually. Anyway, its a fairly impressive shrine: 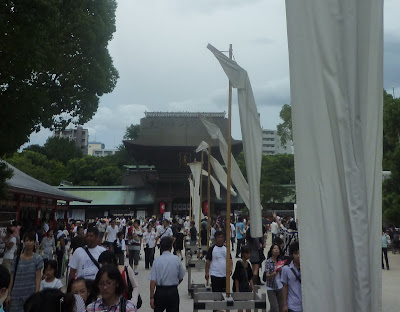 Every month they hold a flea market there on this really long tree-lined avenue leading up to the Shrine. Its one of the largest flea markets in western Japan, with a couple hundred vendors.

I'm reminded when I read Famicom Freak's blog that in North America flea markets seem to be a pretty good place to find bargains on retro gaming stuff. In Fukuoka though this isn't really the case.

Yesterday though I did find what has to be the most awesome retro-game find ever. OK, I say that a lot, but really I mean it this time.

I won't skip directly to that, but instead take us on a little build up as we walked through the vendors, perusing their wares and making the obligatory non-gaming purchases of gifts for relatives that happen when one is shopping with a non-game collecting spouse.

There was some pretty cool stuff out there. One guy had a booth entirely filled with vinyl: 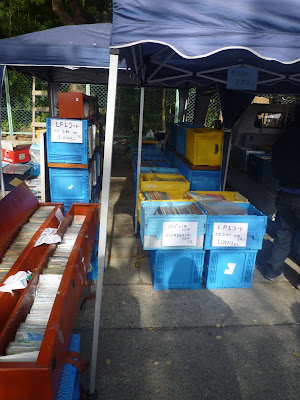 After finishing up with this Famicom collecting thing I think I'm going to get an LP player and move into that hobby. They looked pretty awesome.

There were the odd vendor with a smattering of Famicom games, like this one, whose selection was lovingly wrapped in a paper bag along with some Super Famicom carts. I love the fact that they tucked these away just in front of their used jeans and shoes section: 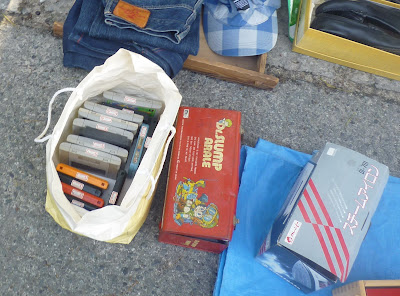 The prices were reasonable (100-300 yen each depending on the game) but they were all games I already had, so I couldn't get any closer to my collecting goal at the market.

Other vendors had some really cool retro home electronics and furnishings. I would really love to get a TV like this one to hook my Famicom up to. Actually its a bit too retro for a Famicom but still, I dig its style: 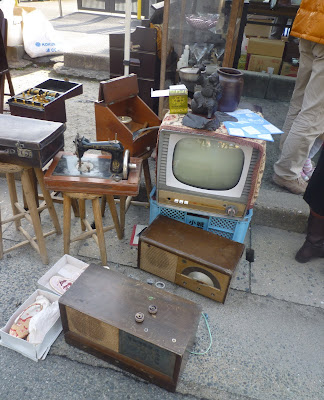 The most amazing thing at the Flea Market was at the last stall in front of the shrine. I almost did a double take when I saw them. Nestled behind a bunch of boxes of clutter and junk sat these three beauties: 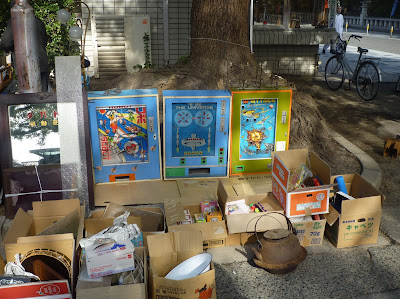 These are three really old-school arcade pachinko type machines that you could play for 10 yen each. I saw something similar on an episode of GameCenter CX once. Look at them close-up: 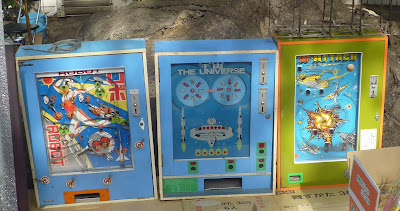 The one of the left is called "The Mutant Robot", the one in the middle is "The Universe" and the one on the right is "W Attack".

"W Attack" you will notice is a Star-Wars rip-off, so I'm guessing these date from the late 70s. The artwork is lifted directly from the Death Star battle scene: 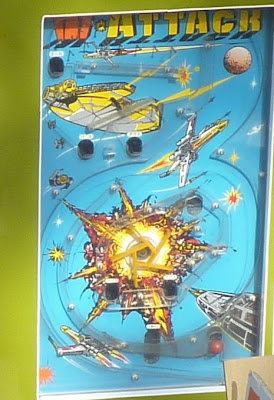 The artwork on the others is sweet enough to also merit extreme-close-ups: 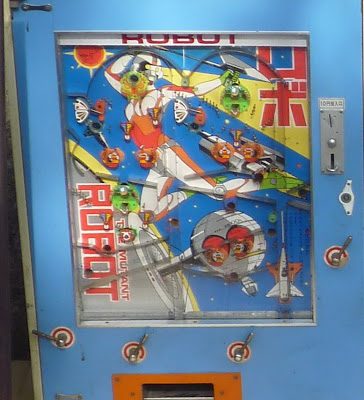 I wish I could say that these, or at least one of them, now grace my living room, but alas I cannot. One of the disadvantages of being bicycle-bound is that large purchases that don't fit into a basket are hard to make. Or, to put it delicately, hard to convince your non-game collecting spouse to let you make. Believe me, I tried. Oh, the undignified scene I made. Reminiscent of a child in a department store crying to her mother for candy. All to no avail.

So these things are still out there, loaded onto to the back of a truck at the end of the day. I hold little hope that they will still be available by the time of the next flea market in December. Actually, they didn't have prices on them and I didn't ask so it is entirely possible that they are completely out of my price range anyway. I'm glad that I at least got to see them though.

I did get one massive consolation prize though. My super-awesome wife, perhaps sensing my disappointment, took me to Mandarake later in the day while we were downtown. While there she allowed me to choose my Christmas present out of the (drum roll please): glass case of retro-game collecting legend. It was the most beautiful moment ever, my first time to actually get something out of the glass case where they keep the best games at the best game shop in Fukuoka.

She was a figure of semi-divine beauty. Calling over the staff in the voice of Sirens:

"We want something out of the glass case."

Thus beckoned, they brought out from behind the counter the most noble tools of their most noble trade: The store's set of master keys.

Unlocking the shrine's outer door the staff member turned and in verse befit of a Homeric epic inquired:

In silent beauty my true love extended an index finger in the direction of a box on the middle shelf.

And the transaction was all but complete. Whisked off to the cashier she paid the bill and we were on our way, retro game treasure in tow.

What did I get? Stay tuned to this space. Like I you will also have to wait until Christmas for the grand unveiling.
Posted by Sean at 9:45 AM