Back in the USSR: That's where Famicoms Are 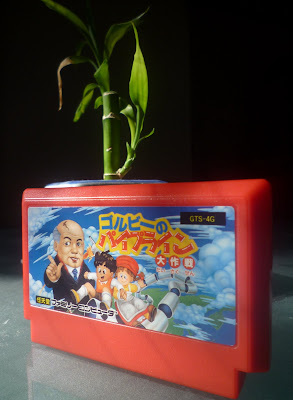 Its been suggested that I include some posts about actual Famicom games on here, and seeing as how this is a blog about the Famicom I think that is sound advice. So here is my first post specifically devoted to a single Famicom game (I did do one on Star Wars games, but that was about 3 games really): Gorby no Pipeline Daisakusen.

I'm not very good with reviewing games from a game playing perspective so I won't do that here. This guy already beat me to it anyway, seems like he's got it all covered. So, you know, just go over to his sight to read about the contents of the game itself. Basically its a puzzle game in which random pieces of pipe fall from the top of the screen and you have to match them up to create a continuous pipe across the screen.

The only thing by way of review of the game that I'll add is that I hate the fact that it doesn't have a multi-player mode. It is the type of game that would have been ideally suited for it (a la Dr. Mario). 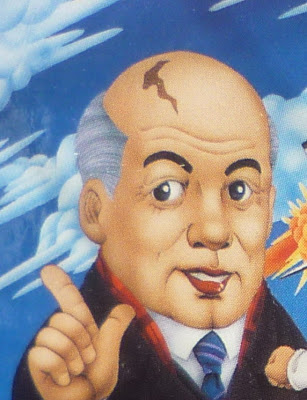 Anyway. If I had to rate my favorite media appearances of Gorbachev's birthmark, I would rate his appearance on this cover at number 3, just slightly behind its appearance in his official White House photo from 1987: And a million miles behind its appearance in the opening sequence to the Naked Gun.

Still I like its appearance on this game's cover a lot. I was a bit intrigued by it, in fact. How on earth did a Soviet leader get a video game made of him in the evil, capitalist West while he was still in office?

The Japanese Wikipedia entry for the game offers some guidance. According to that, during the Perestroika period Gorbachev became something of a pop idol in Japan, and the word "pipeline" was used in relation to the diplomatic strengthening of Moscow-Tokyo relations. So they decided to make a game using both concepts: Gorby and pipelines. The game is about the construction of a water pipeline, which had no parallel in actual Soviet-Japanese relations.

According to the entry, in order to use Gorbachev's likeness the game's makers had to apply to the Soviet embassy in Tokyo for permission. In a frustrating example of how unreliable Wikipedia can be, this assertion isn't footnoted so I can't go and read more about that. I think it would make quite an interesting story.

I did some perusing of Japanese blogs, but they more or less say the same thing as whats on the Wikipedia page. I did like this blogger's use of the phrase "ソビエチックな雰囲気" (which I'll translate as "Soviet-ic aesthetic") to describe the kind of Russian-themed puzzle games like this one and Tetris though. So it wasn't an entirely wasted effort.

There is another somewhat intriguing element of the cover of this game. Hidden behind the game's title is what looks to be a Space Shuttle rocketing through the skies: 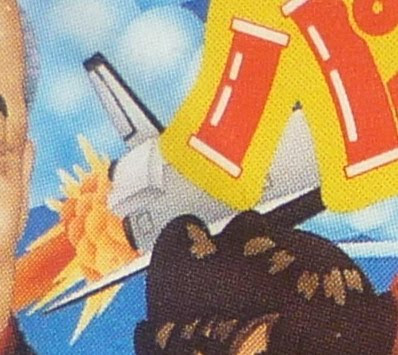 This of course has nothing to do with the game, which is about making a water pipeline. I seem to remember reading somewhere that during the 80s the Soviets had made a copy of the Space Shuttle, but never actually flew it, so maybe that is what it is? Strange thing to just pop in there though.

The other cool thing that I like about this game is that it was never released in the USA. Why it never got released on the NES, I have no idea.

Oh, right. Them. Poor souls missed out on a good game though.
Posted by Sean at 12:14 PM