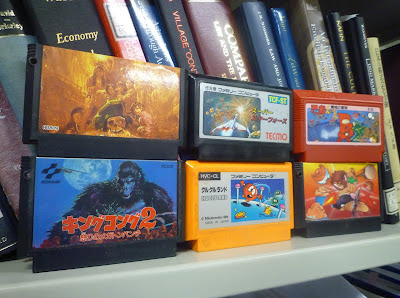 Oh, wait I see. You mean why are those games together called the Oyama Collection? Because of this: 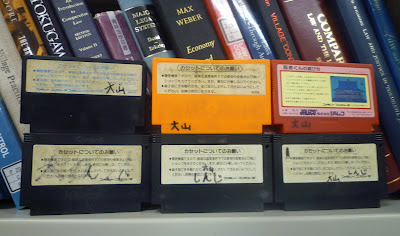 Well, maybe I should rewind a bit here.

I went to Omocha Souko today and they had just tossed these games into their junk bin with prices of 100-300 yen each on them. I just picked them up, paid for them and didn`t really think much about them until I took them out of their plastic baggies. It was then that I noticed that each of them had the same name - Oyama (大山) - written on the back. 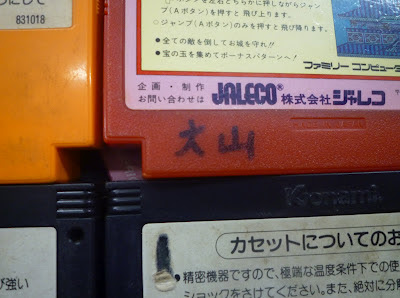 I thought that was quite interesting. I get Famicom carts with kids` names written on them all the time, but this was the first time I had ever gotten a whole group of them from the same kid`s collection.

At this point in the Famicom`s lifespan enough time has passed that most of the childhood collections of kids like this have already been dispersed throughout the secondary market. Some have been sold and resold countless times by now.

Not these ones though. These came directly from the kid (or perhaps a relative of the kid, whose first name is Shinji according to the backs of Yie ar Kung Fu and King Kong 2). Probably somebody was clearing out an old room, maybe getting ready for a move or something, and they just dragged everything they didn`t want to Omocha Souko where they were probably paid 20 yen for the lot and that was that.

Anyway, I think that is something special. Individually these are all fairly common games that you can find pretty cheap at most retro game shops, but taken together the group is more than the sum of its individual parts. I think I will try to keep the Oyama collection intact rather than breaking it up. In fact, I feel almost duty-bound to do so.

Cheers to you, Shinji Oyama. Your Famicom collection will be maintained for the ages....
Posted by Sean at 6:35 PM