Collector Rage: Missing Out on a Bargain 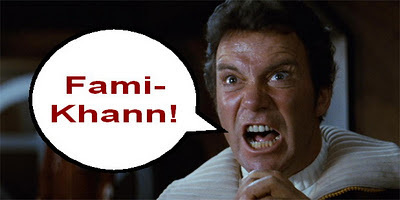 Captain Kirk's rage at being outsmarted by Khan on the Genesis planet in Star Trek II is I think the image that best captures the mood one has when beaten to a bargain by somebody else.

This happened to me the other day at Omocha Souko. It was the most frustrating shopping experience I have ever had. By way of background, I usually stop by that place 2-3 times a week on my way home. I visit that frequently because they get Famicom and other retro game stuff in there quite often. When they do they sometimes put it in their junk bins or at the very least put a cheap price on it. The good stuff of course doesn't last, so if you want to get the cream of the crop you have to visit regularly like I do.

I walked into the store that day and started my usual stroll towards the back of the store where they keep their Famicom section. On my way I noticed a man on his way to the cashier with a basket full to the brim with stuff. As we passed each other I glanced at what he had and my eyes almost popped out of my head. The basket was full of Famicom games - really good ones. He had CIB copies of games like City Connection, Pac Man, Spartan X, Goonies and a whole lot of other ones I couldn't see underneath. These games are relatively easy to find loose but can be quite expensive to find CIB like that and all were ones that I wanted.

I knew immediately that this meant they had just gotten a bunch of Famicom games in that they had dumped out for sale because they didn't have those games the last time I visited. I ran to the back of the store to the Famicom section and I found:

That guy had just beaten me to it. He must have cleared out every single new Famicom game they had just gotten in. I didn't see the price on them, but given that he had grabbed them all immediately after they had been put out, they must have been cheap.

It was the most agonizing moment in my retro game collecting life. If only I had gotten there 10 minutes earlier! Did I really need to spend that time reading the article about Demi Moore's 9-11 call that morning? No! Why, man? Why? Oh the agony!

The funny thing is that if I had arrived after that guy had left, I wouldn't have felt disappointed at all. I would have gone in, seen they had nothing new, and walked right out and been on my way, none the wiser. But knowing what I had missed out on? Argh!