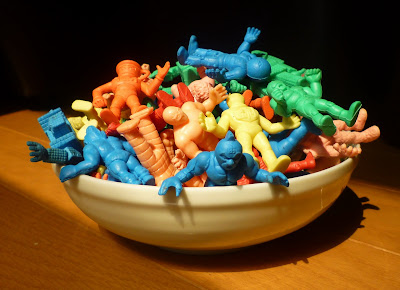 bowl of muscle men
the sun's rays they do ponder
silent as they wait
- M.U.S.C.L.E Man Haiku #47 by Sean
I was at my favorite store the other day when I saw a clear bag on a lower shelf that was bursting with color emanating from within.

I stooped down for a closer look and was immediately taken back to a feeling I had not had in a long time.

The summer of 1987 was the time, a newly opened Exchange on a United States Army base near a small West German town was the place. The Famicomblogger as a 10 year old spotted a colorful box on the shelf. It was rectangular with a plastic window on the front revealing a couple of dozen molded plastic figures in a variety of vibrant colors.

Mesmerized he took the box off the shelf. Three dollars if memory serves. The rest is history.

1987 was a fun year, nearing the end of my childhood years but just beating the buzzer by a few months . M.U.S.C.L.E Men are probably the last toyline to be released with which I have a childhood memory. From 1988 onward I lost interest in toys completely so the attraction of anything more recent than that is lost on me.

So it was that a couple of days ago I stood in the aisle of that store, bag of M.U.S.C.L.E. Men in hand, pondering that year. As I've stated before, I'm always reluctant to buy toys from my childhood because I know that actually owning, say, a bag of M.U.S.C.L.E. Men won't turn the clock back to 1987 for me, no matter what the stupid sentimental half of my brain believes.

Nonetheless, it was only 300 yen for the bag. The exact right price point. Any more and the accounting department of my brain would have been demanding answers. Outlays of greater than 300 yen require justification. Why is this money being spent? What are the expected benefits of this purchase? What are the opportunity costs involved?

Endless mental paperwork would have been involved. Just a nightmare. Under 300 yen though pretty much anything, even a bag of M.U.S.C.L.E. Men, goes. 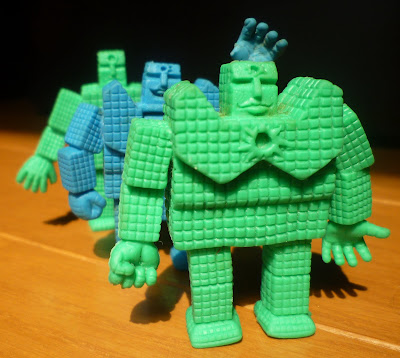 What I got wasn't technically a bag of "M.U.S.C.L.E. Men", but a bag of Kinnikuman men. A little web research revealed to me that they are basically the same thing. As a side note I should warn all of you interested in doing similar research to ensure that before you enter the phrase "muscle men" into a Google image search you set the SafeSearch feature to "high." Trust me, you'll be glad you did.

Any-hoo, Kinnikuman is a popular character here. A wrestler. I hate wrestling and always have, even back in 1987. I'm not sure why I ever bought the things when I was a kid in the first place, I think I just liked the colors. At any rate, I did buy them and now have to deal with the consequences, which is a sentimental attachment to a wrestling themed toyline. Its a relatively benign affliction and I can't really complain too much about it. 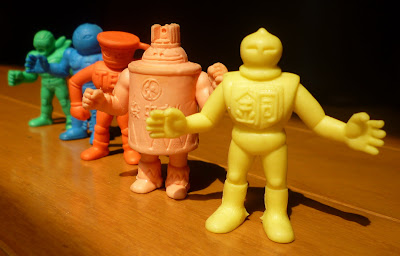 The toyline pretty much just came and went in the English-speaking world, but in Japan they've got tons of cartoons, comics and other crap devoted to these characters which I have absolutely no interest whatsoever in learning about. I rather just like them as inanimate colorful pieces of plastic that I can store conveniently in a bowl. Doing so comforts me.

They of course released a Famicom game based on the characters, which is the only thing other than the little plastic guys that I have any interest in: 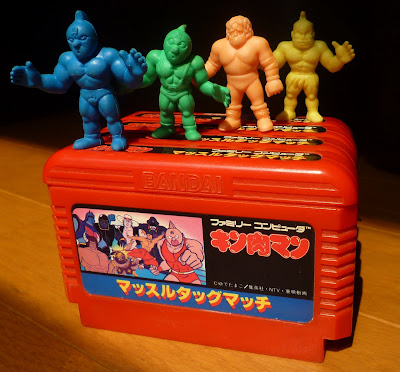 The game itself doesn't have much to say for itself. I looked up a few reviews of it, all of them bad. They generally concur with my brief attempts to play the game. Unlike most reviewers I quite like the clumsy graphics, but other than that its just not an enjoyable game.
Posted by Sean at 11:14 AM