Pachinko and the Famicom: AKA the Stupid Side of Japanese Gaming 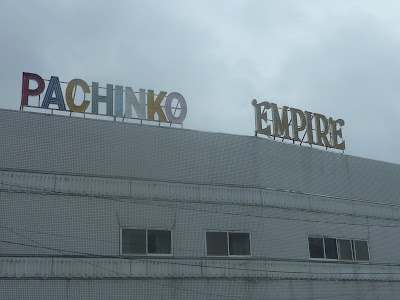 I was in Omocha Souko a couple days ago and found that they had put some more stuff into their junk section. Unfortunately the only Famicom related thing they put out was this: 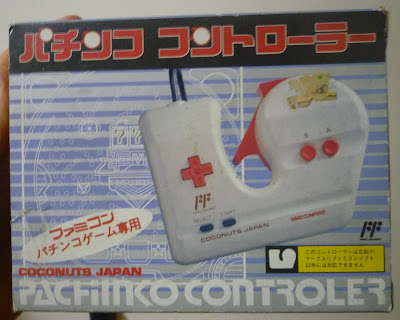 The Pachinko Controller (misspelled as "controler") from Coconuts Japan. At 100 yen I figured, what the hell.

Released in 1991 this probably takes the cake as the stupidest controller ever released for the Famicom. This is one of those things that is peculiar to the Japanese world of gaming. One of those "stupid things" I should say. And I do apologize for the excessive and childish uses of the word "stupid" in this post. I really couldn't think of a better way to express the nature of this controller and pachinko games in general than with the use of that adjective.

Anyway, almost every console in Japan has at least one Pachinko controller released for it. The junk section of Omocha Souko is full of them, mostly for the Playstation.

Pachinko is a simple game, very similar to pinball. You shoot metal balls and try to get them to fall into certain holes. Unlike pinball though, pachinko is a form of gambling. You win more metal balls if you get it in the right hole and these can be exchanged for prizes. So its really more a combination of pinball and slot machine.

As gambling is technically illegal in Japan, you can't exchange these balls directly for cash or prizes. But mysteriously a number of businesses have sprung up right next to pachinko parlors which will exchange them for such prizes. No collusion there whatsoever (wink wink, nudge nudge).

The pachinko industry is an insanely large one. In 2006 it took in 27.45 trillion yen in revenue (about 275 billion US dollars), a sum greater than the domestic auto industry. They are everywhere, you almost can't walk 5 steps in Japan without running into one. This leads me to...

My Rant About Pachinko
I promised myself I wouldn't do this, but the urge to use this post as a platform to air some of my grievances with the pachinko industry is just too great. Skip this section and go to the bottom if you are only interested in the Famicom controller. Read on if you are interested in bad stuff about pachinko.

I have to say that I have never played Pachinko (save on the Famicom) and never will. There are just so many reasons to be disgusted by the industry that it boggles the mind. The top four that I can come up with off the top of my head:

1. Pachinko kills babies. No kidding. Every summer across Japan pachinko addicted parents leave their offspring in boiling cars while they go to play pachinko for hours on end. They then come back to find their kids dead from the 40 degree heat (see here, here and here for just a few examples reported in the news).

2. A lot of pachinko parlors are owned by groups with North Korean connections who funnel the profits to Pyongyang, which in turn uses it to build weapons. I thought this might just be an urban legend, but it turns out there is a semi-reputable source for this information (see the Japan Times article here).

3. As with any gambling, some people get addicted to it and end up ruining their lives with debt. See the above linked Japan Times article on how shady consumer loan companies have taken advantage of this by setting up shop right next to Pachinko parlors (though I'm glad to say that most of those businesses have gone under since that article was written due to changes in Japanese law on the interest that such companies can charge).

4. Pachinko parlors are ugly. In an urban area they can sometimes provide a bit of welcome kitsch to a street, like this one here: 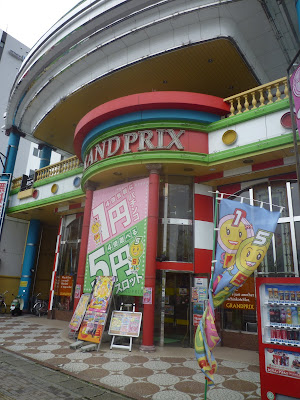 But most of them are just massive contributors to urban sprawl. It is not uncommon to find stretches of once beautiful countryside being razed to build one of these eyesores and the massive parking lots that surround them. Beautiful old farmhouses and rice paddies replaced by this: 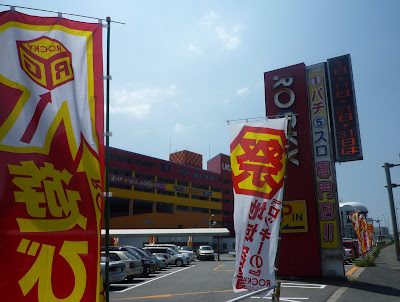 Not good at all.

End of Rant
OK, glad I got that off my chest. Anyway, where was I? Oh yeah, the stupid controller. 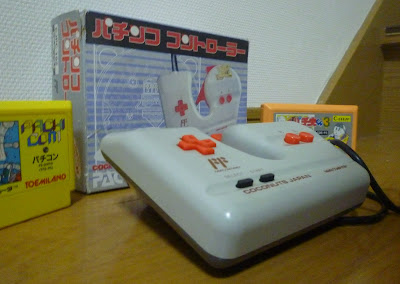 As I was saying, this is a stupid controller. You might notice that it is basically just a big, clumsy regular Famicom controller with an added trigger button. I plugged the thing in with a Pachinko game to give it a try: 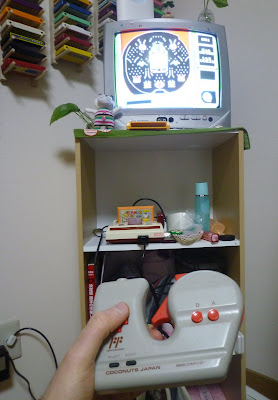 I had a lot of trouble figuring out what this trigger was for. The best I can tell it just replicates movements that you can execute with the regular buttons. So, you know, its kind of stupid.

Actually, I have to say that Famicom pachinko games in general are really stupid. The fact is that it is not a fun game to play at all, the only thing you control is the angle of the ball when it is released and then you just watch as the balls randomly fall wherever they might: 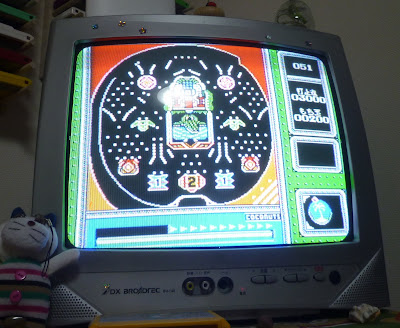 Seems the only reason people play regular pachinko is because of the gambling element, which of course is absent in the Famicom. So as I said, its just kind of stupid.

Anyway, I end this post with a photo of the crumbling facade of "Pachinko Empire", a parlor not far from my place that went out of business a couple years ago and now sits rotting: 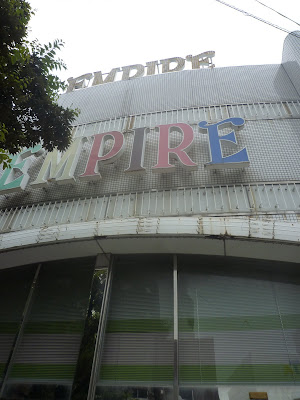 I get all sorts of pleasure from seeing this thing crumble. It is a mix of schadenfreude and my romantic fascination with the folly of hubris and the ephemeral nature of human existence. Brings to mind the classic of Japanese war epics:

The sound of the Gion Shoja bells echoes the impermanence of all things; the color of the sala flowers reveals the truth that the prosperous must decline. The proud do not endure, they are like a dream on a spring night; the mighty fall at last, they are as dust before the wind.

- Opening passage of the Heike Monogatari (13th century military romance. Translated by Helen Craig McCullough)
Posted by Sean at 9:38 AM