Bringing the Blog Back to Life 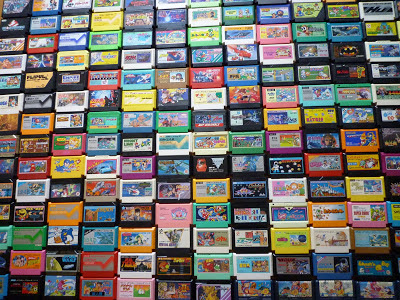 Not sure if anyone is still out there but hello, my name is Sean and I like Famicom games.  This is, or at least was, my blog.

I have been out of blogging for a few years now.  I started this blog almost ten years ago.  At the time I was a graduate student in Japan with lots of free time, very few responsibilities and also very little money.  The perfect time to start a blog about collecting Famicom games, which at the time were extremely cheap and plentiful!

Then I graduated, got a full time job, had two wonderful kids and bought a house in the suburbs (still in Japan) and Famicom collecting, and blogging about it, had to take a back seat to everything else.  So the blog has gotten extremely dusty as I haven't really posted regularly in the past four years.

But now I want to dust it off and start blogging about the Famicom again. Two things have prompted this decision:

1) When I started this blog I had the goal of collecting all 1051 officially released Famicom carts.  I never reached that goal during the blog's original lifetime but I have decided to re-start that quest and that naturally gives me something to blog about.

2) Being a father now gives me a different perspective on things than I had a few years ago and I hope this will give me something useful or at least interesting to write about.  My kids have never played Famicom but I'll probably introduce it to them in the not too distant future so that will likely be another focus (for privacy reasons I won't be putting pictures of them here but you can take my word for it that they are insanely cute and awesome kids).

So we'll see how this goes!

One initial thing I am of mixed emotions about is what to do with my antiquated blog list.  One of the best things about blogging isn't your own blog but reading those of others.  Its kind of disheartening to try to get back into the blog and look up all the other blogs I used to follow only to get either blogs that haven't had an entry since 2013 or, worse, pop up ads telling me that the domain of a former blogger's site is now for sale.  Looks like about 80% of the blogs/sites I followed 5 years ago are now defunct!

On the other hand I am delighted to discover that a few are still at it, like Simon and Bryan  and I look forward to catching up on what they've been writing about.

Still though, not sure about that blog list.  Its kind of an interesting archeological record of what the retro game blogiverse looked like circa 2012 so I''m tempted to leave it intact.  On the other, its mostly a bunch of dead links or links to discontinued blogs and not much use to anyone.

Anyway, I hope to do about a post a week from now on and see how long I can keep that up!
Posted by Sean at 12:08 PM