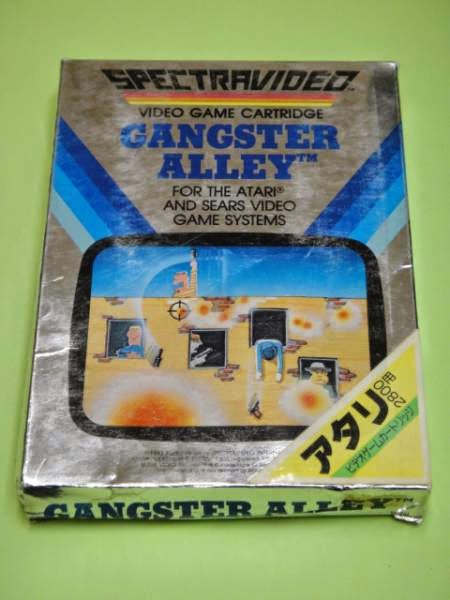 I just picked the above Atari 2600 game up off of Yahoo Auctions.  Gangster Alley is the name, shooting is the game.  I am always on the prowl for Atari 2600 games to feed to my (admittedly difficult to use but nonetheless much beloved) Atari 2800 system.

This random Atari 2600 game though I think might be a really interesting discovery, a piece of video game history that I haven't been able to track any information down on the internet.  It therefore intrigues me and I want to write a bit about it here.

First to rewind a bit.  The Atari 2800 was Atari's disastrous attempt to introduce the 2600 to the Japanese market.  They chose 1983 to do so, the same year the Famicom came out.  You can guess who won that battle.  So few Atari 2800s were sold that it is quite a rare console to find today.

The 2800's lifespan was so short that only 30 titles were officially released for it.  These were all Atari 2600 carts that had Japan-specific boxes and manuals made for them, which are pretty cool and, like the console, very hard to find.  Well, the loose carts are indistinguishable from 2600 carts, so really its just the boxes and manuals for the games that are rare.

This brings me to my new copy of Gangster Alley.  Take a look at this list of Atari 2800 games.  Note that Gangster Alley is not on it.

Now take a look at that box.  Note that everything about it is the same as the Atari 2600 box for that game.  Except the lower right hand corner, which has a label which says:

This seems to have been an Atari 2600 game that did not get a re-make for its box art but nonetheless was released in Japan for the 2800 with just a sticker applied to the box.  I have looked around the internet, both English and Japanese (incidentally Japanese people almost never write or blog about the Atari 2800, it was that unpopular here) but haven't been able to come up with any information about this.  It makes me wonder what other Atari 2600 games in addition to the standard 30 might have been released here.

Any Atari experts out there know anything about this?