Five Years of Famicomblogging: A Retrospective 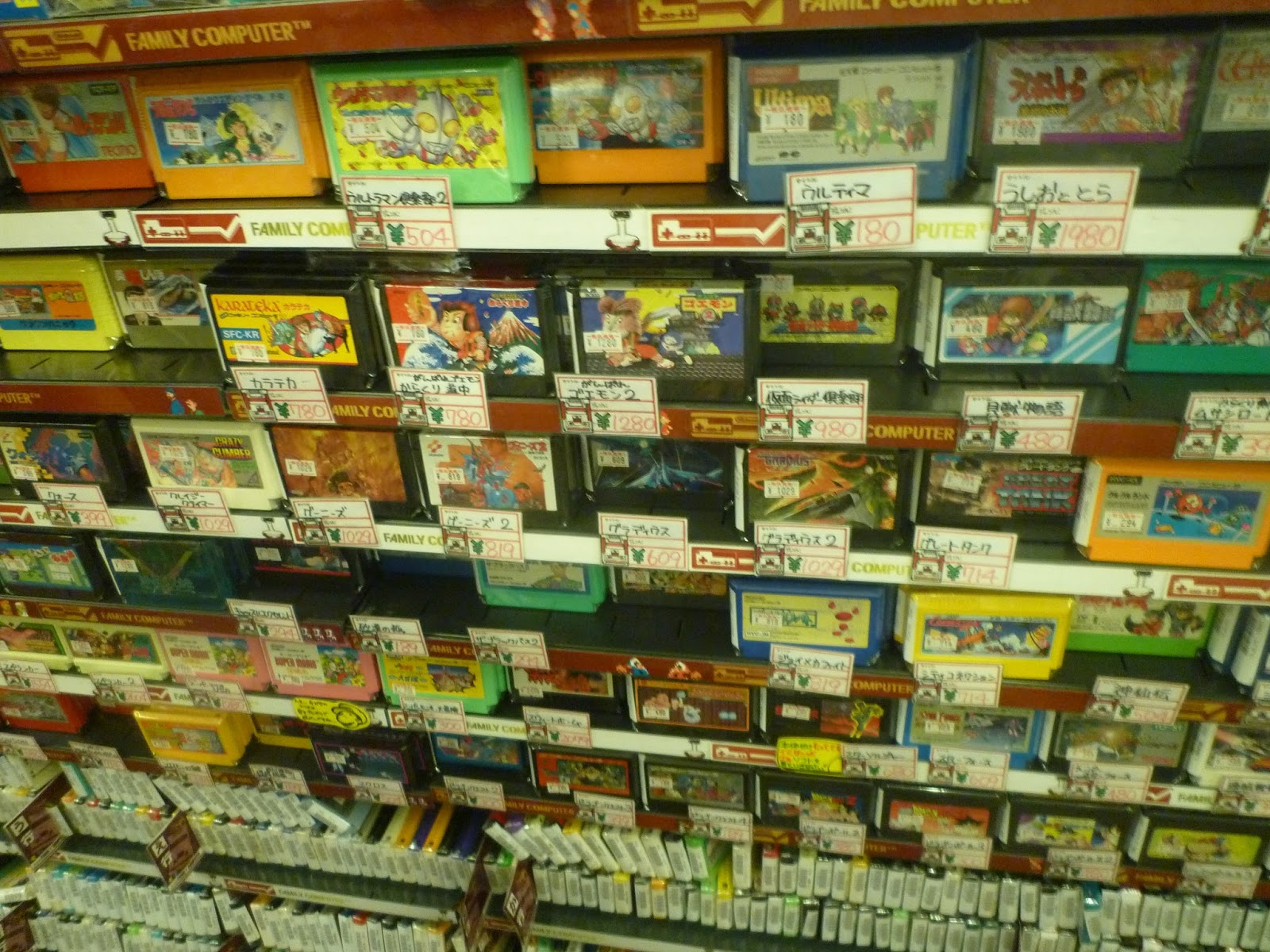 Five years ago today I found myself in my living rom in our old apartment in Fukuoka with a bit of free time to kill. I sat down on a tiny sofa with a ton of recently photographed Famicom carts scattered on the floor and I wrote this post about the different designs that Famicom carts came in. Thus Famicomblog was born.

Five years later and, much to my surprise and delight, Famicomblog is still a going concern even though the recent addition to our family has severely dented my blog output.  Normally when a blog becomes too self referential it is a sure sign it has jumped the shark, but screw everything I am going to do the ultimate in self referential blogging just this one time to mark the occasion.   In self-congratulatory honor of having reached the 5 year milestone I am going to take you on my ego trip through what I like about my own blog.  Read on at your own peril 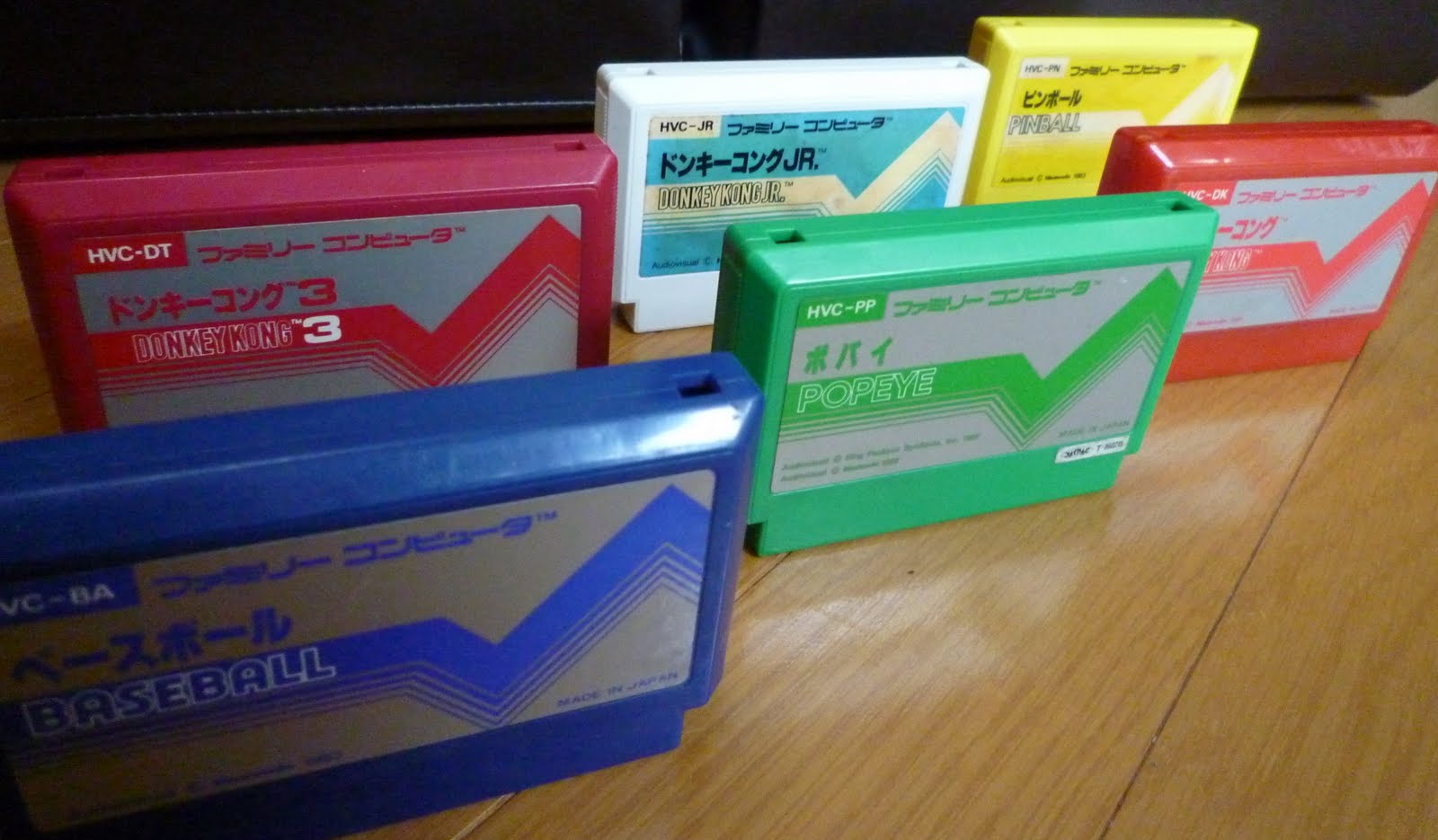 So, what are my favorite posts?  I ask myself.

My Tour D`Excitebike post that I made during the first year remains the one I enjoyed making the most. I just took 5 copies of Excitebike with me on a bike ride around Fukuoka, taking pictures of them at random places - castle walls, a port with fishing vessels tied up, the red light district, etc etc. I got a few odd looks from people as I did so but that was a really nice day and so totally worth it. 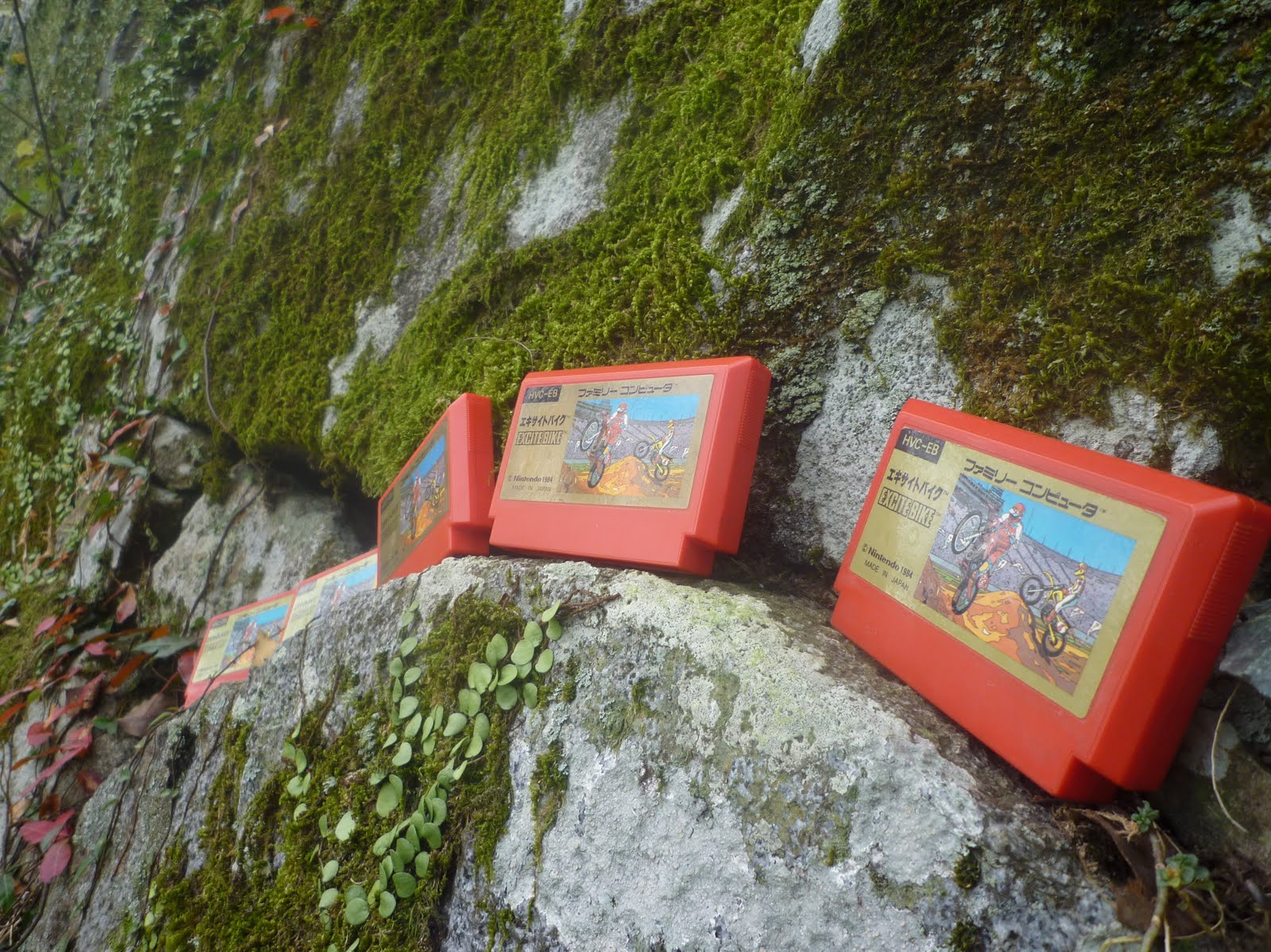 I did a few similar posts like that, including this one with my Nintendo Lefty RX about a year ago which was also a lot of fun (I was pleased with how the photos for that one turned out, if you use forced perspective you can make a tiny toy car look almost real) 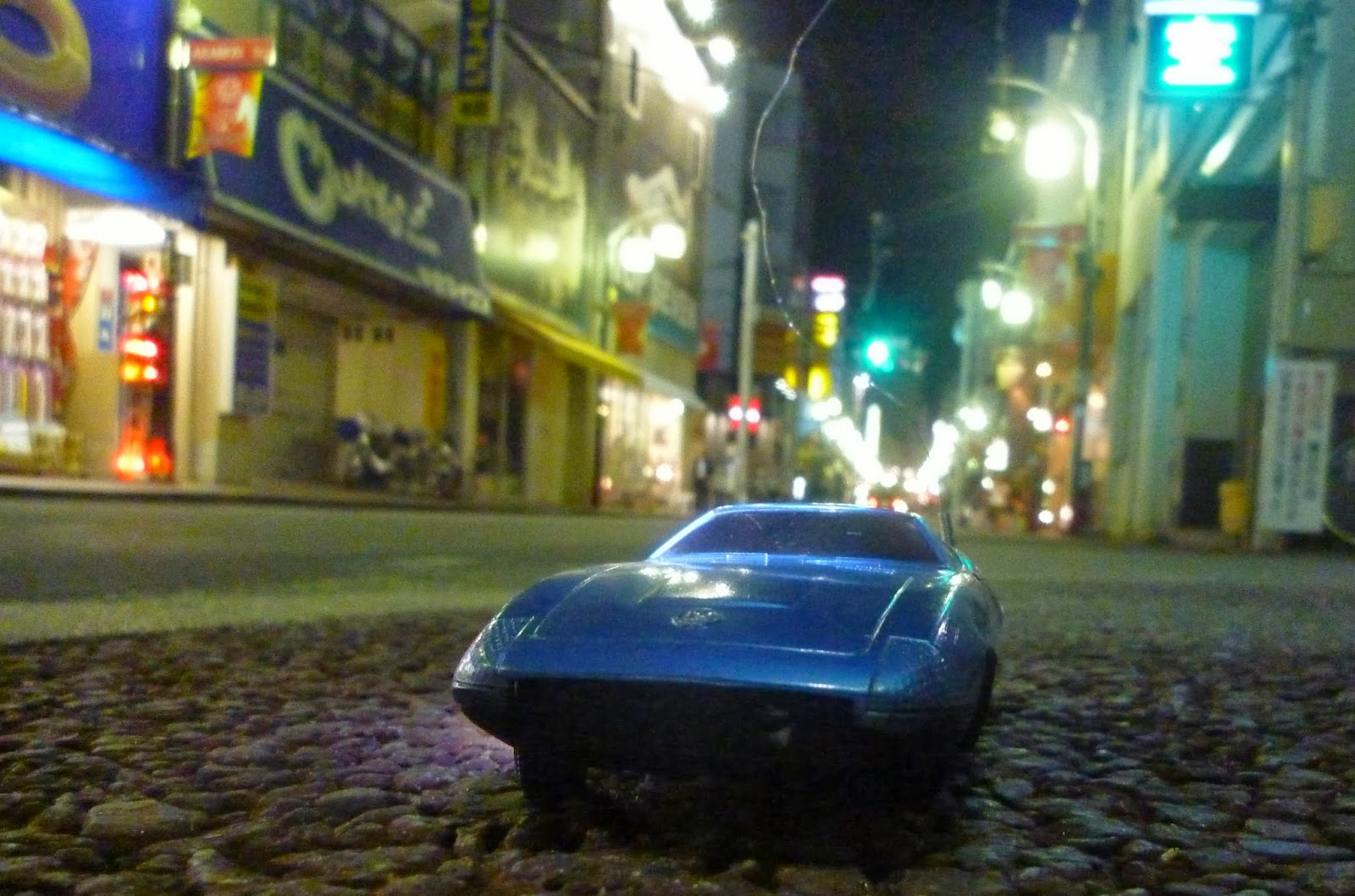 One kind of post which I did a lot in the early days of this blog but gave up after about the first year or so were ones in which I photographed my entire collection.  The carts look so awesome stacked up, I kind of miss doing those posts.  When you have a collection of under 500 carts like I did back then it was still feasible to do those, once I got above that number I had to stop doing it mainly for lack of space to set them up and take the photos. 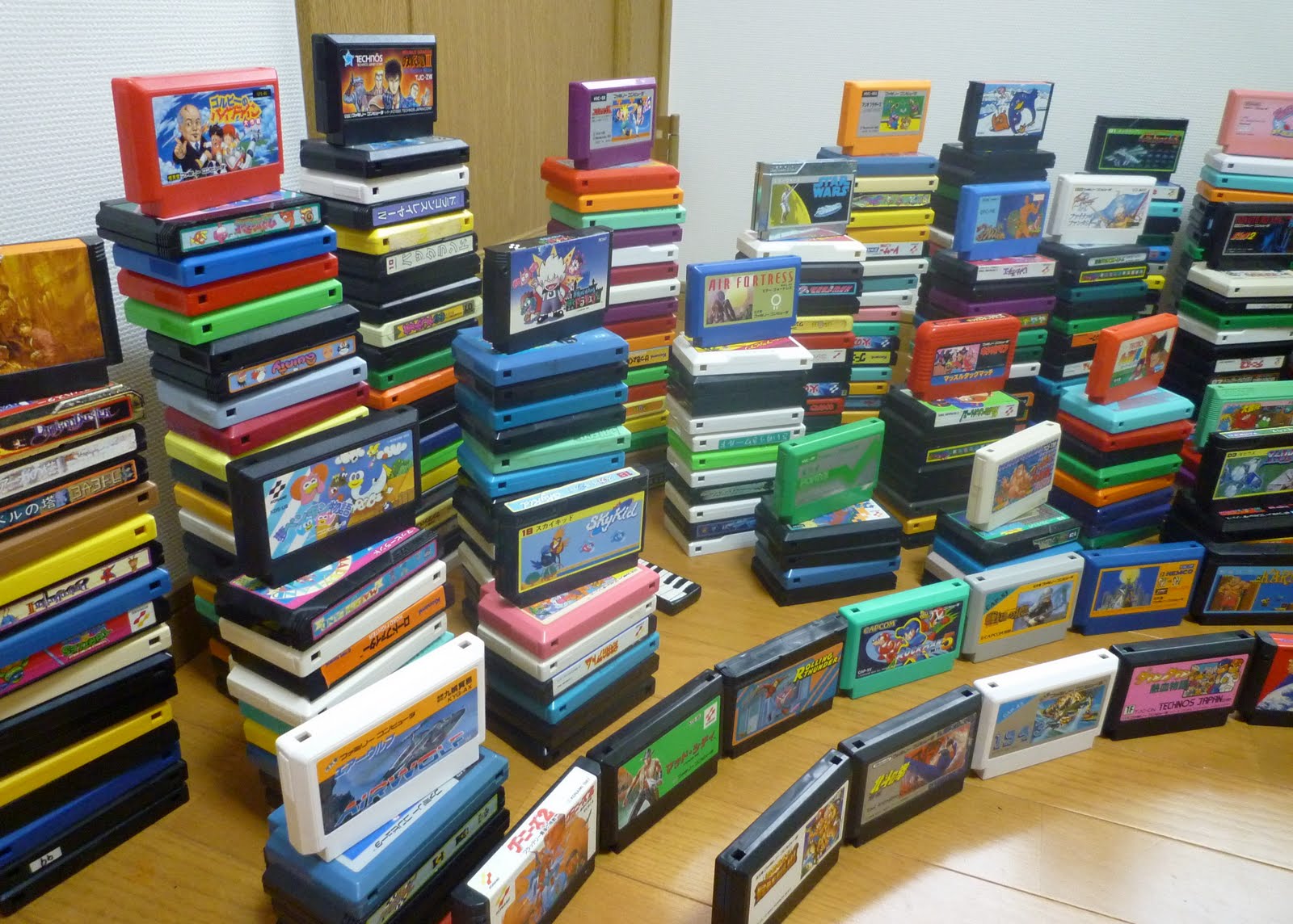 And of course the first 3 years of the blog would often feature posts from my main retro gaming source, the amazing Omocha Souko.  The day I found out it was going out of business was by far the darkest day in my gaming life, it had been such a fun place to go for deals.  I still enjoy looking back and reading old posts about the deals I got, especially the day they put these crates out. 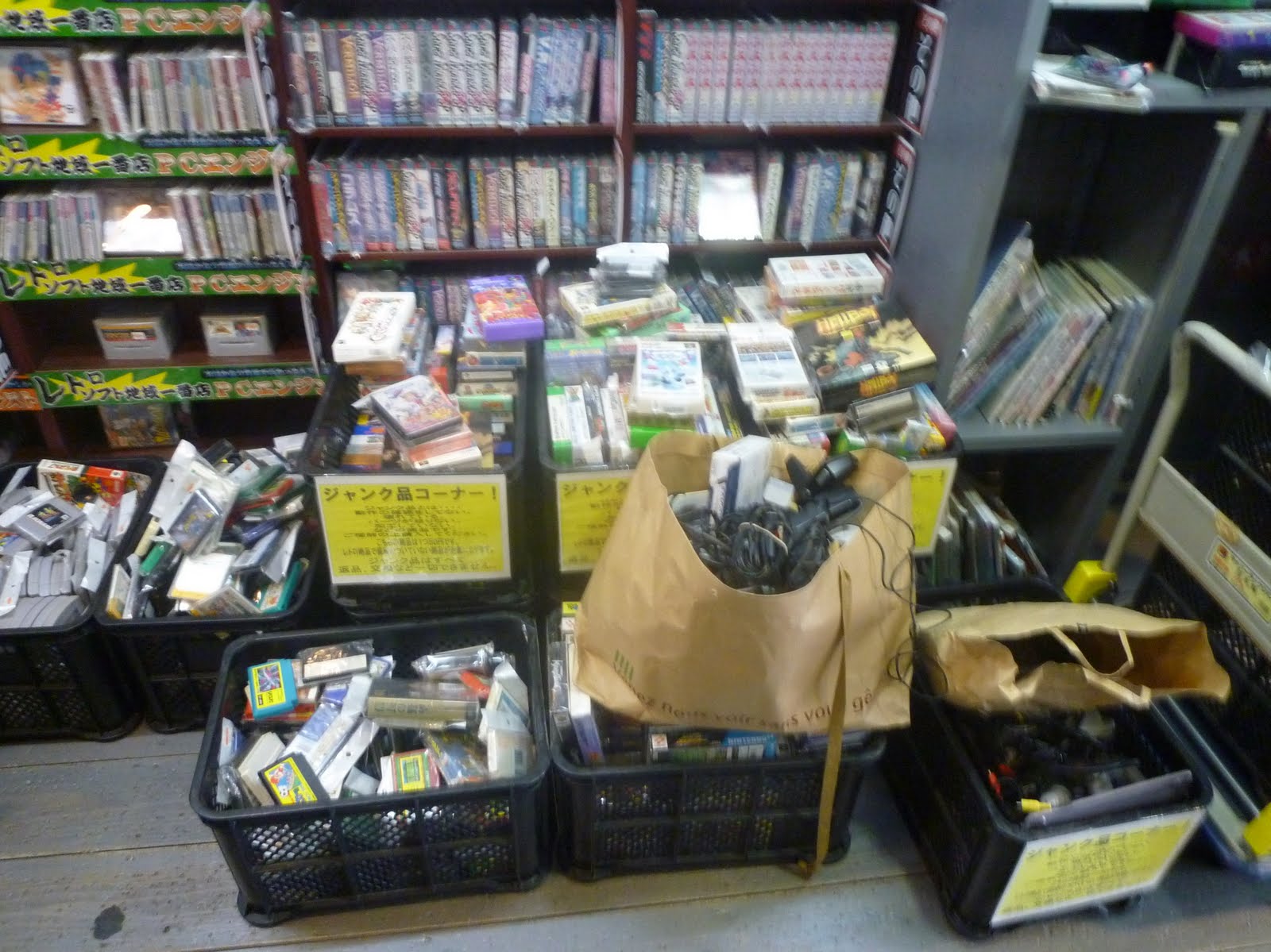 Another type of post which I wish I had time to do more of these days were the ones I did of retro game shops in Fukuoka that I visited. I think this blog has more information about the Fukuoka gaming world than any other, at least of those in English. Sadly, even though it has only been five years since I started this blog most of that information is already out of date, probably half the shops I visited have either closed or moved. 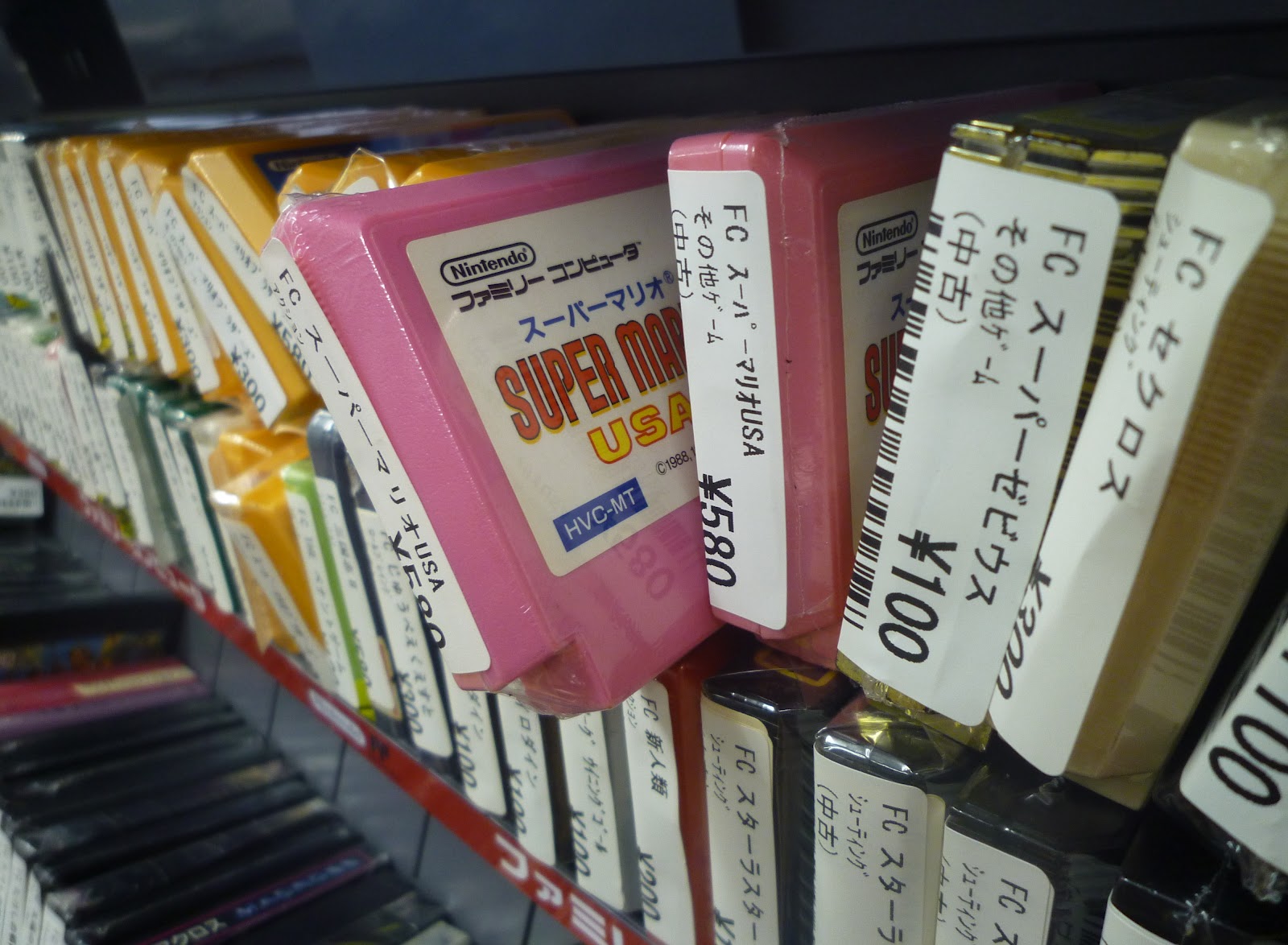 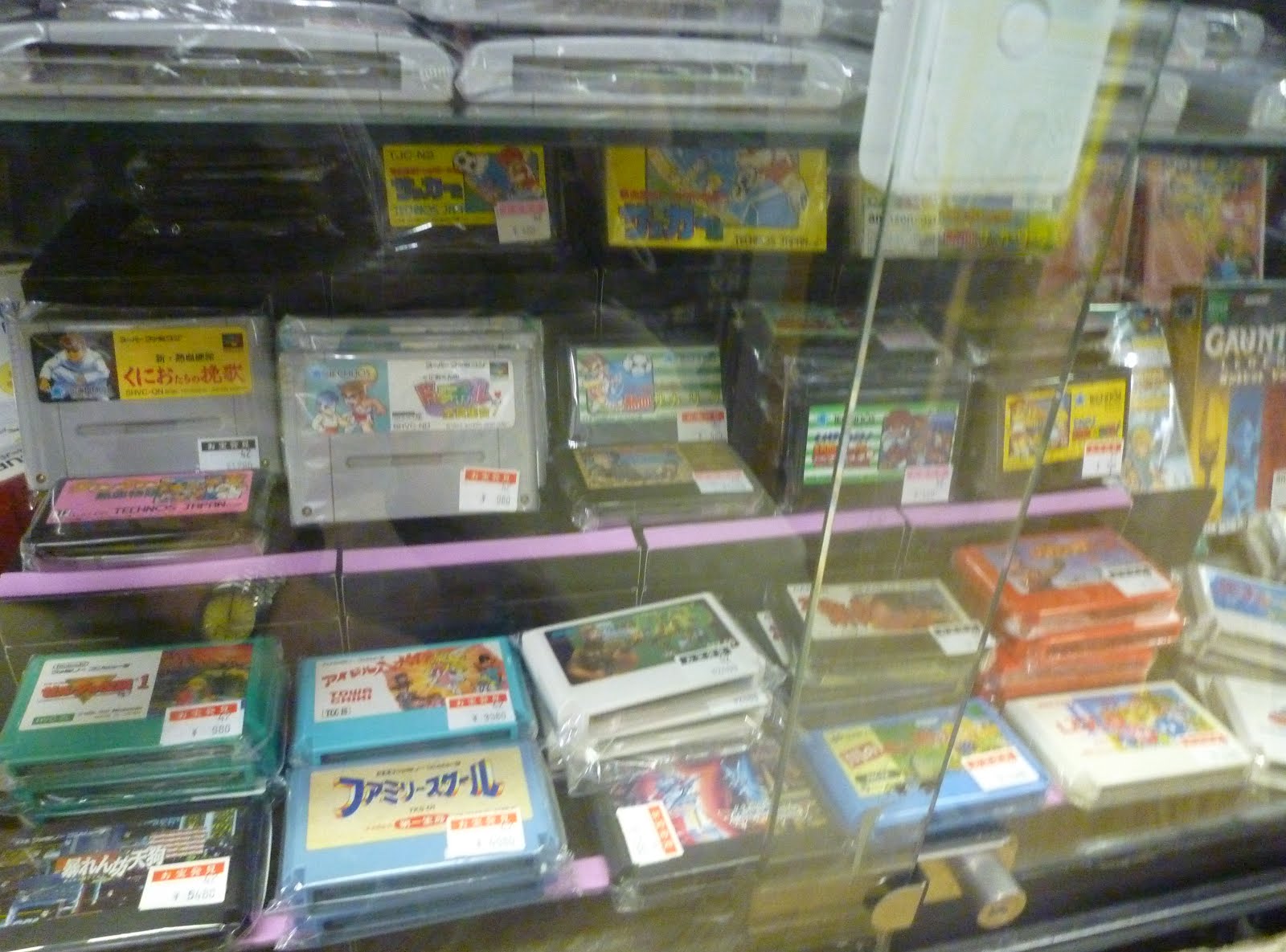 Probably my favorite post, in terms of substance, is the one in which I compared the power consumption of retro consoles to the PS3 and found that my entire retro gaming collection used less energy than the average one of those.  I'm not sure what the PS4 uses, I'd like to do a similar comparison but I sold most of the duplicate consoles I used in that post so I might not have enough to make a comparison. 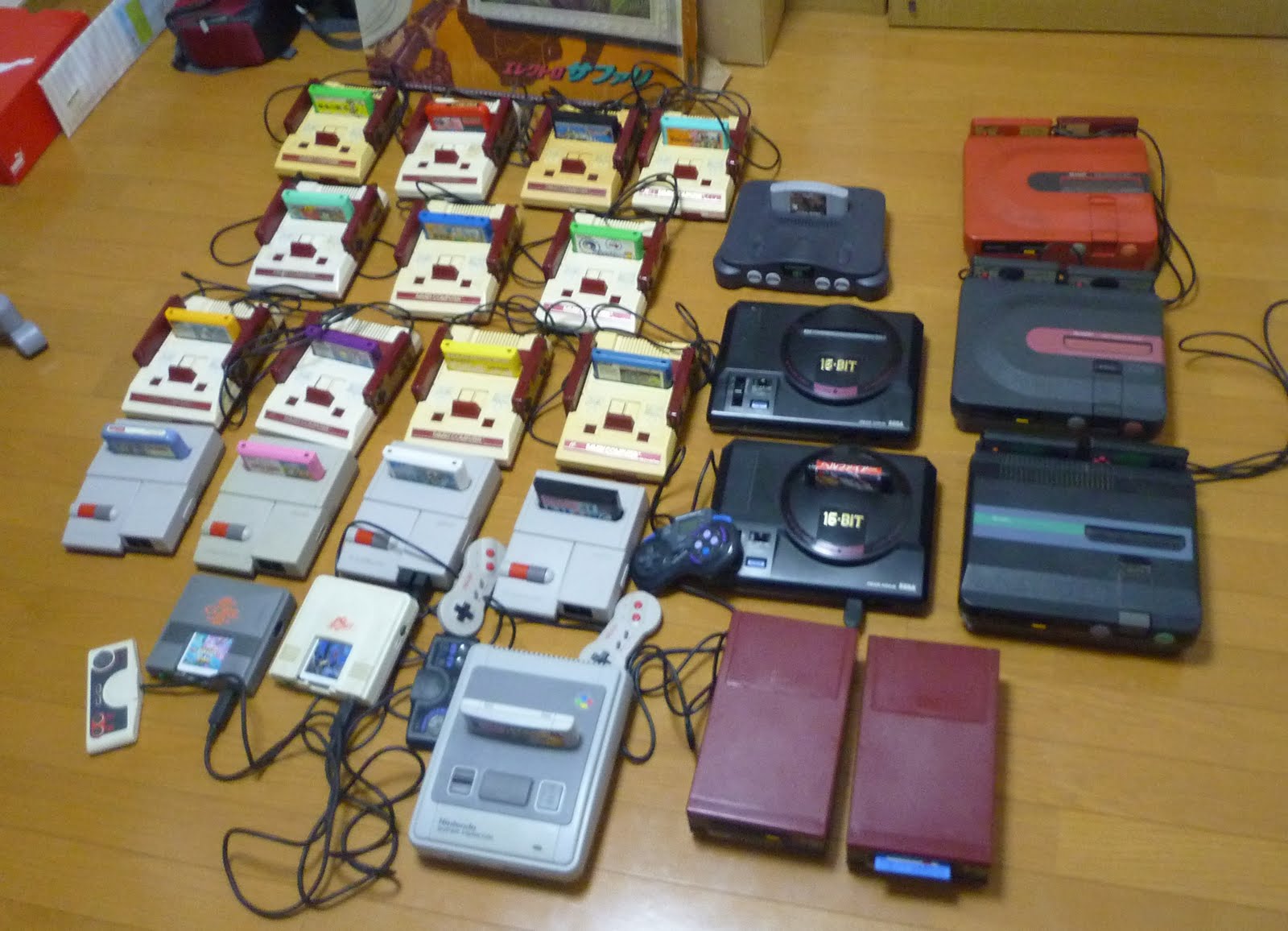 Another thing I have to do is get Phil in some more posts.  I packed him away when we moved 2 years ago and I think its about time I fished him out of whatever box he is in. 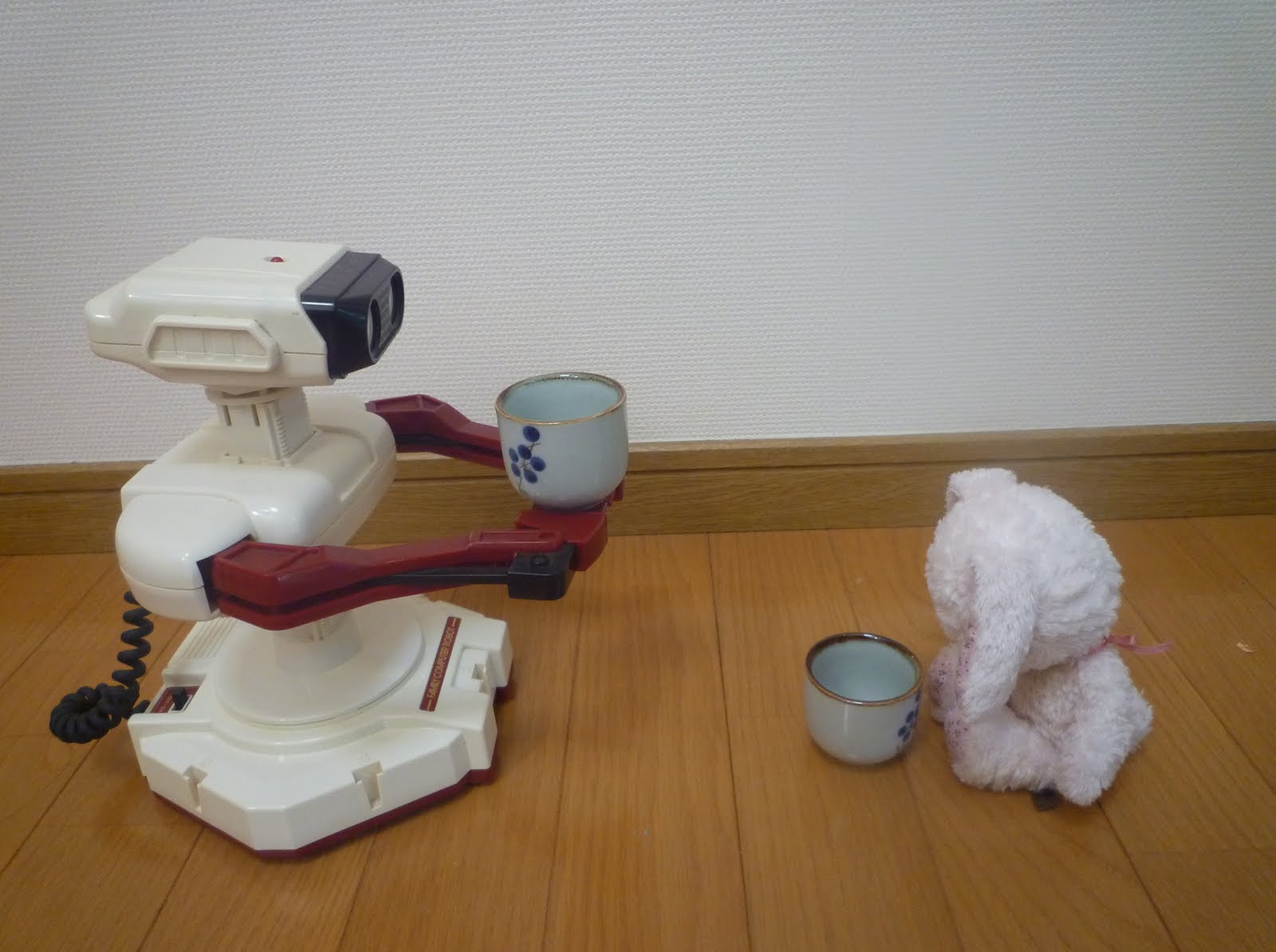 Anyway, those are some of my sentimental reflections as the father of a 5 year old blog.  I should like to give a big thanks to everyone for reading all these years, it has been awesome getting to know you all through the blog (and through your blogs for those who have them, I'd list you by name but refrain out of fear of forgetting someone).  Hopefully five years from now I'll do another one of these on Famicomblog's 10th anniversary.