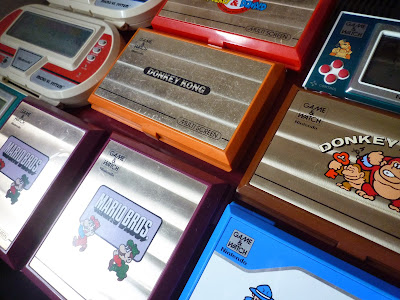 I`ve been collecting Game & Watches for a few years now, but I still don`t have too many.  I really like them though.  I never owned one as a kid, though I did have some generic-brand handhelds which were nowhere near as cool.

Anyway, this week I acquired four more Game and Watches all in one go through a trade with Whatsupchang over on Famicom World.  I sent him a package of Famicom games and he sent me these beauties: 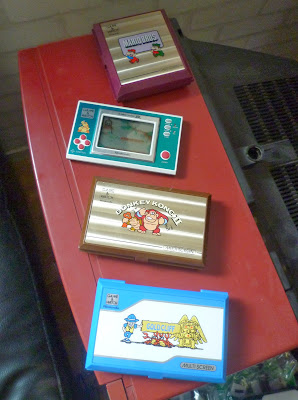 Actually, Donkey Kong Jr and Mario Bros I already had copies of which I bought at Omocha Souko in Fukuoka a couple of years ago, but Donkey Kong II and Gold Cliff are completely new to me and are really great.  Gold Cliff in particular I had never heard of before but it is kind of a neat game - you control an adventurer and have to get him up to the top of the dual screen to collect some stuff.  Basically the same gameplay as all Game and Watches and I like that.  It also looks pretty good, I like blue stuff!

This is actually my second Famicom-for-Game and Watch trade that I have done on Famicom World.  About a year ago I did a similar trade for the red Micro vs system boxing one, which goes well with my Donkey Kong Hockey here: 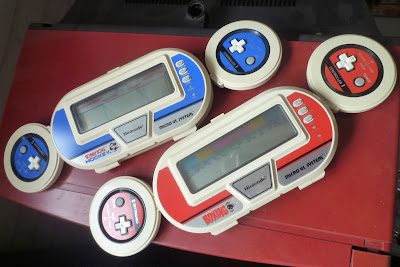 There were three of these vs systems made, all I need now is the green Donkey Kong 3 and I will have the whole set!

So my Game and Watch collection is now on the grow again. 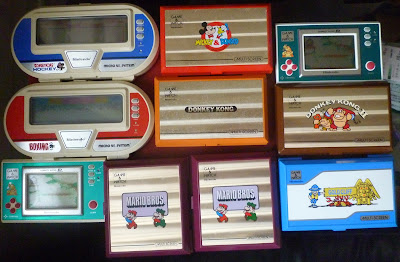 I just love these things!  If anybody else has some Game and Watches they want to trade for Famicom carts, just let me know!