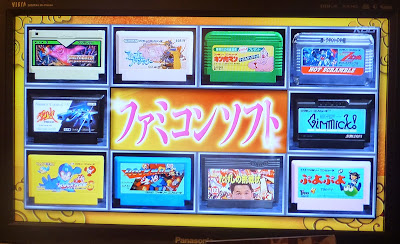 When I was down in Fukuoka earlier this week I was flipping through the channels on the TV in my hotel on the first night and happened to stumble onto a variety show that was featuring Famicom games. It was kind of a cross between the Price is Right and Antiques Road Show.

This was actually one of the more interesting Famicom-related show I have seen because it was specifically about the collectability of Famicom Carts.

They had an expert from one of the big retro game shops in Tokyo (I missed the first minute or two of the show so I didn`t catch which one he was from) and he explained a little bit about the Famicom collector`s market and what it was that made some games valuable.  He divided them into a few simple categories to explain their value.  The first were games from popular series like Rockman, Final Fantasy and Puyo Puyo: 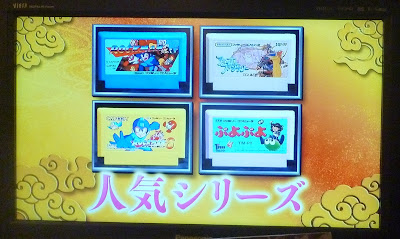 And then there were games that were released late in the Famicom`s lifespan, meaning that there were only a few released like Gimmick and Recca: 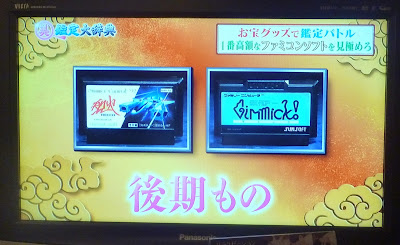 And games that had appeal because they were unusual, like Spelunker or Takeshi no Chosenjo: 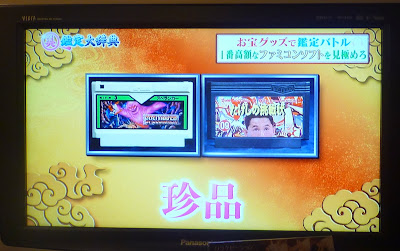 And games that were really limited edition ones, like the green Kinnikuman and Silver Hot Scramble Z: 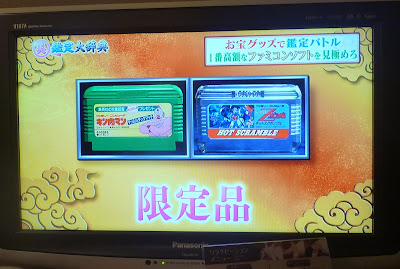 They explained some of these in detail, like the fact that the Spelunker cart came in two versions, one with a red LED and one without.  The one without the LED is worth more (there were a few of those Irem games released like that, I have seen Sqoon without the LED too): 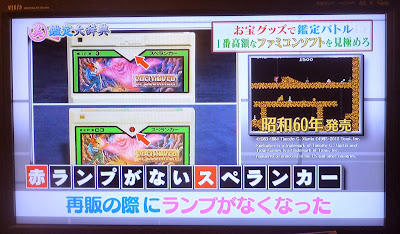 And the Green Kinnikuman cart, which was originally given out as a present and not sold in stores: 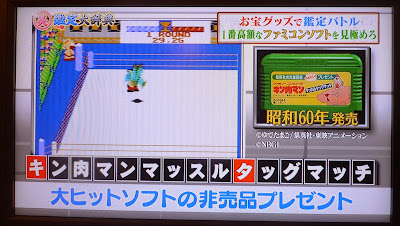 And Takeshi Chousenjo, which as the writing at the bottom of the screen says is called a `kusoge-` (crap game) but its difficulty has led to its re-evaluation and its achieved a sort of cult status: 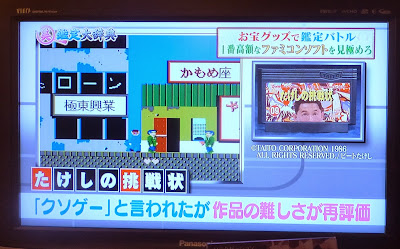 In the second part of the show it became a kind of price is right type of game show. 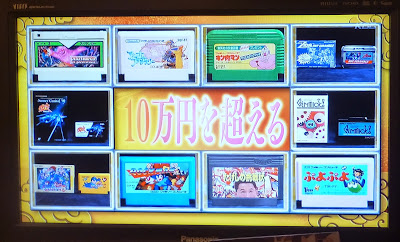 Then the battle began.  The challengers were:

Some guy (on the left) vs Manabe Kaori (on the right), model and actress who is still hot even though she is well past 30: 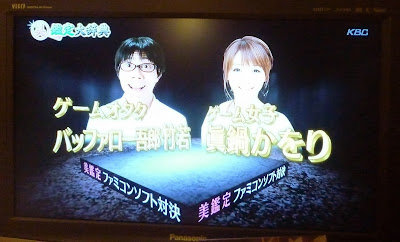 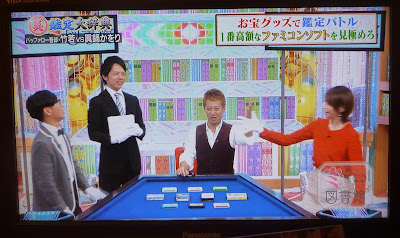 They basically had to choose which game was the most valuable out of a small selection of the ones pictured at the top of this post.  In the first round they looked at the really expensive ones: 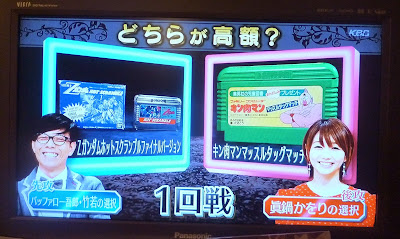 Then they had this rotating number thing which would eventually tell them how much the game they had chosen was worth: 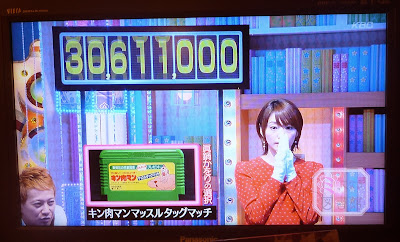 70,000 yen!  Very good Kaori!  Other guy might have won this round because I think Hot Scramble Z silver cart is worth a bit more than that CIB, but still.  Way to go! 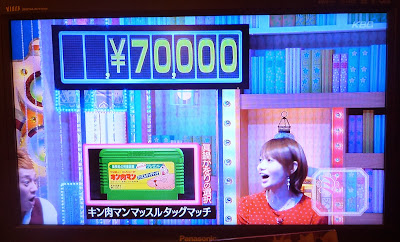 And don`t worry, in the next round the choices were like this.  Rockman 6 worth more than Summer Carnival 92?  Other Guy, what were you thinking? 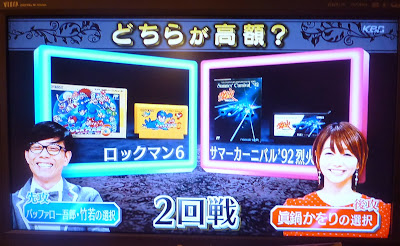 Anyway there wasn`t exactly a lot of suspense in watching these unfold since as a collector I already knew which ones were worth more.  Still though, it was awesome to see Other Guy choose the Takeshi Chousenjo game as the most valuable only to be told that it was only worth a few hundred yen.

It was really fun to watch the show anyway.  When you are part of a hobby that is somewhat limited in size it is always really exciting when you see it mentioned in the mainstream media.  Unfortunately this was just a one-off program and not a regular thing, at least as far as Famicom games are concerned.  At the end they said in next week`s episode they would be doing the same thing only with baseball cards.
Posted by Sean at 9:52 AM